After CNN+ shutdown, Discovery+ adds a CNN Originals hub to its U.S. service After CNN+ shutdown, Discovery+ adds a Cnn Originals Hub to its U.S. service 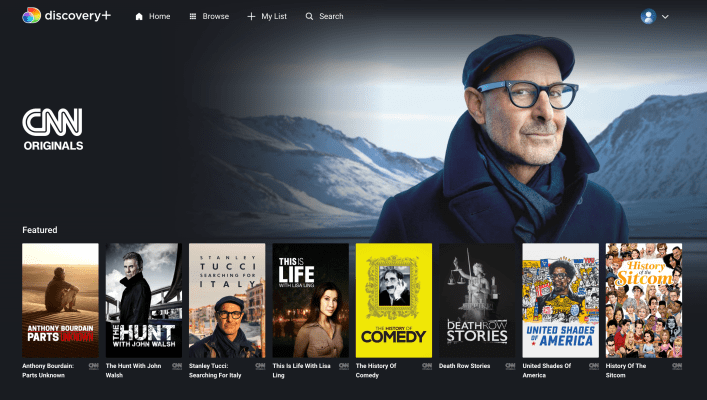 Today, Discovery+ subscribers in the U.S. get access to over 800 episodes of CNN content through a dedicated CNN Originals hub. The network’s three brands — CNN Original Series, CNN Films, and HLN Original Series — will provide viewers with a selection of titles such as “Anthony Bourdain: Parts Unknown,” “Stanley Tucci: Searching for Italy,” “Real Life Nightmare,” “Death Row Stories,” “Race for the Vaccine,” among others.

The announcement was initially made earlier this month, ahead of Warner Bros Discovery’s second-quarter results. The news also comes five months after the CNN+ streaming service was quickly shut down, most likely disappointing the 10,000 or more people streaming the service for the one month it had been in existence.

Now CNN fans can stream the content on Discovery+ at $4.99 per month, along with a variety of other documentaries, home improvement shows, true crime, lifestyle, and other content from networks Investigation Discovery, HGTV, TLC, and Food Network.

CNN+ would only have CNN content at $5.99, so having the hub on Discovery+ is a much better value.

“True crime, food, and travel programming are among the most-watched genres for discovery+ viewers, so these titles from CNN will fit right in with our best-in-class collection of unscripted content,” JB Perrette, President and CEO of Warner Bros. Discovery Streaming, said in a statement at the beginning of August.

There will also be select titles from the CNN Special Reports collection like “Assault on Democracy: The Roots of Trump’s Insurrection.”

With CNN+ gone, Warner Bros. Discovery decided to integrate CNN Originals into its streaming strategy both with this new dedicated hub on Discovery+ as well as by adding titles to HBO Max. The CNN Original “Who’s Talking to Chris Wallace?” is premiering on HBO Max this fall.

On September 30, HBO Max will also gain content from Chip and Joanna Gaines’ Magnolia Network, such as the titles “Fixer Upper: Welcome Home,” “The Lost Kitchen,” and “Restoration Road with Clint Harp.”

In the second quarter of 2022, Warner Bros. Discovery reported that the total number of direct-to-consumer subscribers across HBO, HBO Max, and Discovery+ was 92.1 million.

The post After CNN+ shutdown, Discovery+ adds a CNN Originals hub to its U.S. service appeared first on GulpMatrix.

This post first appeared on Gulpmatrix, please read the originial post: here
People also like
14 Best Black Friday Deals on Refrigerators
VENNA Shares 'Sugar Venom' EP - @iam_venna
ErgoTune Supreme V3 Review (From a Real User)
IS LOVE A NEED OR WANT ?
How Brain Decoding Technology Is Helping Us Understand The Human Mind
This Shocking New Discovery May Change the Way You Think About Metabolism
On October 18th, NFTOne Pass will be launched grandly, and multi-dimensional value will break the limit of NFT value!
Budget-Friendly Pool Cleaners Are Making a Splash
Fullintel Appoints James Rubec as Head of Product
Army Base Still Searching for Machine Gun That Went Missing Days Ago

After CNN+ shutdown, Discovery+ adds a CNN Originals hub to its U.S. service