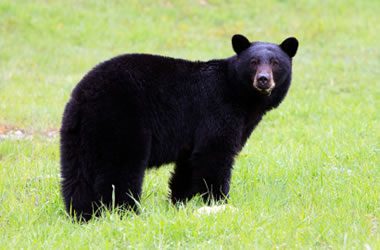 Black Bear: This is what most black bears in North America look like. Image copyright iStockphoto / DesireeDPatterson.

The American black bear is the most commonly seen bear in North America, and it has the largest geographic range. Black bears can be found as far south as central Mexico and as far north as northern Alaska and most of Canada. In the United States black bears are common in the east, along the west coast, in the Rocky Mountains, and in parts of Alaska. They are also found in a few small areas in the southwest and southeast.

Black bear are the most timid and least dangerous of the bears found in North America. They will try to avoid humans as much as humans try to avoid them. [1] However, that doesn’t mean they won’t enter towns and neighborhoods. If they know of any easy food source they will use it, but they generally travel at night to avoid detection.

Not all black bear have black fur. Their fur color ranges from black to light brown, making color a poor method of identification. The size of a bear can help identify it. The average male black bear can range from about one hundred fifty pounds up to about five hundred fifty pounds. [2] This large range in average size is caused by the geographic variations in the abundance of food. Another characteristic is that black bears generally have larger ears than a grizzly. 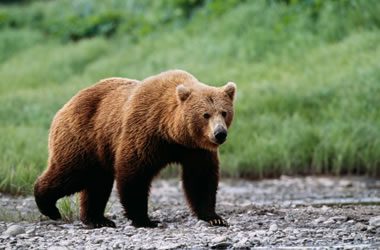 Grizzly Bear: This image shows the distinctive hump that is located on a grizzly bear’s back between the front shoulder blades. Image copyright iStockphoto / PaulTessier.

The grizzly bear and brown bear are members of the same species of bear. Generally they are called grizzly bear when they are inland. In coastal regions of Alaska and Canada they are generally referred to as brown bear. These bears are much more aggressive than a black bear.

The coastal brown bears are generally larger than their inland grizzly bear counterpart. This is a result of the greater abundance of protein-rich food along the coast. While grizzlies eat meat and fish, their main diet consists of berries and plants.

The best identifier for a grizzly bear is the large hump on their shoulders that is best seen while they are walking. Most grizzlies are a medium brown color, but they can range from a very dark brown (almost black) to a light honey brown color. [3] The claws on a grizzly bear are lighter, longer and straighter than the claws of a black bear. 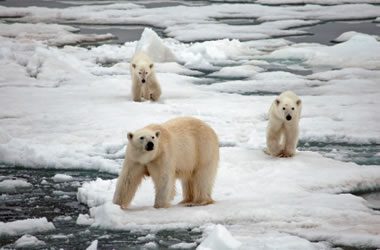 Polar bears are the largest of the three bears found in North America. They range from about seven hundred pounds up to about fifteen hundred pounds. Not only are they the largest bear found in North America, they are also the most dangerous to humans. They are more dangerous because they don’t have much contact with humans – so they may see us as prey when they are hungry. [4] Luckily for us, polar bears are only found in the most northern areas of Alaska and Canada, and all of Greenland.

Polar bears are easily identified by their white fur. They also have the hump on their shoulders like that of grizzly bear. Since plants and berries are not readily available where they live, they are considered more carnivorous than other bears. For most polar bears, seals are the main part of their diet.

The post Map of where bears live in North America appeared first on GulpMatrix.