The glass that offers Ukraine hope: Oksana Kondratyeva on the interface between art, science and architecture MJ Unpacked Returns To Las Vegas For …
Things to Do in Cannon Beach in the W…
Spirit Of Praise Ft. Mpumi Mtsweni – …

Just three days before the 1986 Chernobyl disaster, the power plant’s administrative building received a splash of colour. A nine-part stained-glass series was installed depicting the history of humankind’s relationship with energy, from Prometheus stealing fire from the gods, to scientists splitting the atom. When Chernobyl’s reactor building was destroyed by the nuclear inferno, this glass art survived; what is not yet clear is whether it has also survived Russia’s recent attack on the facility.

“History repeats itself,” was the verdict of Oksana Kondratyeva, a Ukrainian Glass Artist and architect who spoke to me in late April, shortly after giving a talk on the country’s stained glass for The Worshipful Company of Glaziers and Painters of Glass. “We have seen centuries of violence and destruction, and now we are witnessing the same. But like the legendary phoenix, the country will be reborn with new beauty.” All proceeds from that event were donated to Ukrainian relief efforts.

Like the legendary phoenix, the country will be reborn with new beauty 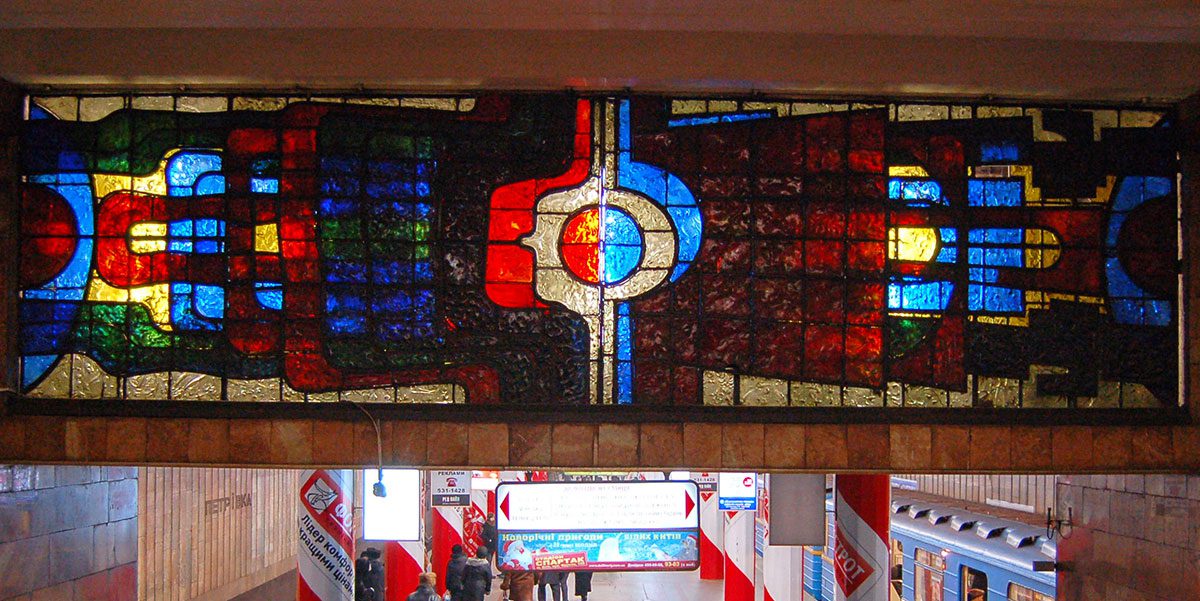 Based in London, Kondratyeva draws inspiration from Ukrainian culture – especially its folklore – in her artwork. She experiments with rhythms and textures, often using an acid etching technique in which sections of glass are selectively dissolved using hydrofluoric acid while other parts are protected with natural materials such as beeswax and tallow. Increasingly operating at the interface between art, science and architecture, Kondratyeva is currently creating designs inspired by the geometry of the quantum chips developed for the UK’s first commercial quantum computer.

Back in Ukraine, with the war still active, it is difficult to establish the scale of damage to the country. However, Ukraine’s Ministry of Culture and Information Policy has launched a platform to track war crimes against its cultural landmarks. More than 250 cases have so far been noted, including the destruction of notable stained-glass windows at Kharkiv Art Museum and the Kharkiv Korolenko State Scientific Library. Where possible, efforts are being made to protect stained glass, either by removing it entirely (which is preferable) or by boarding it up.

According to Kondratyeva, archaeological evidence suggests that the first stained glass in Ukraine dates back to medieval times, when artisans created colourful windows and mosaics, mainly for churches and other ecclesiastical buildings. But the burgeoning glass culture was cut short when the Tartar–Mongolian invasion of 1240 devastated the territory. Glass production frequently reemerged between wars and by the late 19th century Ukrainian glass art was flourishing once again. 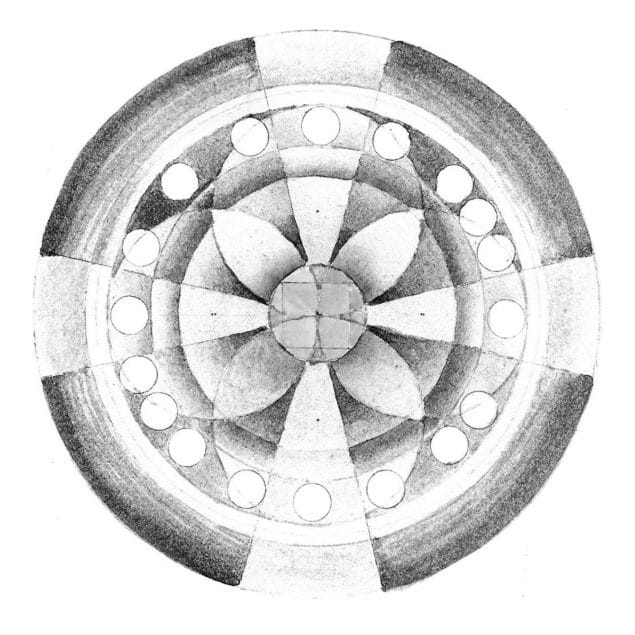 Heritage art A sketch of the central stained glass in a triptych planned for a residential property in Oxfordshire, inspired by the geometry of Rigetti’s quantum-chip casing. (Courtesy: Oksana Kondratyeva)

With demand driven by building booms in Kyiv, Lviv and Kharkiv, production initially occurred outside the region, but local glass workshops soon emerged in Ukraine. Kondratyeva says that a floral secession style was particularly popular with private customers, and Ukrainian artists blended glass with different media to create Gesamtkunstwerk, or “total works of art”.

Some of this heritage was lost during the Soviet period when Communist officials destroyed glass icons, as well as works that threatened their political ideals. But within the officially atheist Soviet Union, science and technology were elevated to almost religious status, and many stained-glass windows were created for universities and research institutes. The energy series at Chernobyl was created by Mykola Linnyk when artists started to search again for a Ukrainian identity.

During Soviet times, glass art was even installed in underground stations, reflecting the ethos of public art for the working people. Today, residents in Kyiv and Kharkiv are using those same underground stations to shelter from Russian shelling. For Kondratyeva, the underground art has become a source of hope. In these troubled times, it is a proud reminder of the nation’s rich cultural heritage.

The glass that offers Ukraine hope: Oksana Kondratyeva on the interface between art, science and architecture