Things to Do in Cannon Beach in the W…
Statement from Agriculture Secretary …
Madame Tussauds Museum, San Francisco
Travels through History – Northern Sp…
Oura Smart Ring and its Amazing Healt…

Optically-pumped magnetometers (OPMs) are a promising emerging technology that could make magnetoencephalography (MEG) more accurate and tolerable for patients who have difficulty remaining motionless while the exam is performed – such as young children.

MEG, an established clinical tool used to non-invasively measure brain activity, records the magnetic field generated by the electrical activity of cortical neurons. One key application of MEG is detecting the region of the brain from which epileptic seizures originate. Locating this epileptogenic zone is essential for evaluation of patients with focal drug-resistant epilepsy prior to brain surgery to alleviate or minimize seizures.

MEG is currently performed using a bulky neuromagnetometer containing hundreds of superconducting quantum interference device (SQUID) sensors that need cryogenic cooling. OPMs, on the other hand, are lightweight, wearable and use magnetic sensors that do not require cryogenics. In contrast to SQUID-based MEG systems that use a rigid, one-size-fits-all helmet, a wearable OPM-MEG device can be optimized for an individual’s head shape and size, making its use with paediatric patients more feasible. 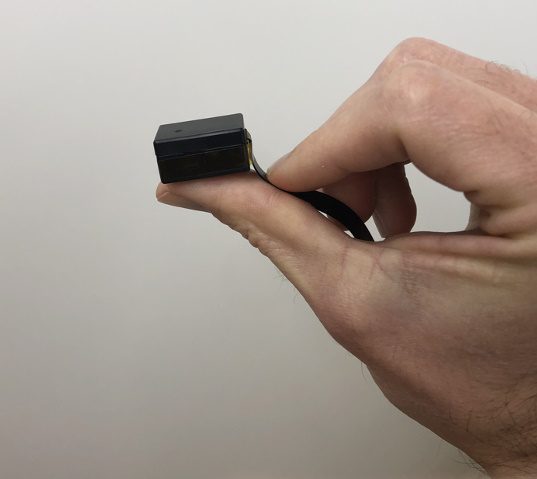 A team headed up at Université Libre de Bruxelles has now conducted a prospective pilot study comparing the ability of OPM-based and cryogenic MEG data to detect and localize focal interictal epileptiform discharges (IEDs), the large intermittent electrophysiological events observed between epileptic seizures. The researchers found that an OPM-based MEG device, developed by the team in collaboration with researchers at the University of Nottingham, was better at identifying IED neural sources than a conventional SQUID-based MEG.

The study’s findings, reported in Radiology, pave the way for further development of a wearable whole-head, motion-tolerant OPM-MEG device to record whole-brain signals in children with focal epilepsy. This type of device could potentially also be used to record motor, sensory, language, visual and auditory evoked fields, to localize the areas of the brain that control these functions in a pre-surgical setting.

The study included five children (aged between five and 11 years) receiving treatment at either the CUB Hôpital Erasme or the Hôpital Universitaire des Enfants Reine Fabiola. Each child wore a conventional flexible EEG cap adapted to their individual head circumference, onto which 3D-printed plastic sensor mounts to affix 32 sensors were sewn. The mount design allowed digitization of the OPM position on the child’s scalp using an electromagnetic tracker. The sensors only partially covered the scalp, and were placed on and around the presumed location of the epileptogenic zone as determined by a previous scalp EEG.

For the OPM-MEG exams, the children sat in a comfortable chair at the centre of a compact magnetically shielded room, with no constraints on head position or movement, watching a short movie as data were acquired. The OPM localization procedure took approximately 10 min for each child. The team subsequently performed SQUID-MEG exams on the same day, using a 306-channel, whole-scalp neuromagnetometer with 102 magnetometers.

First author Odile Feys and colleagues report that both MEG devices identified IEDs with comparable spike-wave indexes (the ratio between the number of seconds with IEDs and the time of the total recording) in all five children. Because the OPM-MEG cap enabled a 3 cm smaller brain-to-sensor distance than the SQUID-MEG, IED peak amplitudes were 2.3–4.6 times higher with OPM-MEG than with the conventional device.

Although the OPM signals were generally noisier than SQUID signals, the signal-to-noise ratio was 27–60% higher with OPM-MEG in all participants but one (whose head movements created pronounced artefacts), thanks to the increase in signal amplitude. The researchers suggest that motion-related artefacts could be reduced with OPM denoising algorithms and extra hardware solutions, such as field nulling coils.

“Future studies based on larger numbers of patients with epilepsy and greater numbers of OPMs to allow whole-head coverage (including the development of triaxial OPM sensors) are needed to position OPM-MEG as a reference method for the diagnostic evaluation of focal epilepsy and to replace cryogenic MEG,” the team writes.

Feys advises that the next steps of the OPM-MEG research performed in Brussels will investigate an automated and fast (1–2 min) way to localize the OPM positions relative to the scalp. The team also plan to study wearable OPM-MEG for seizure detection and localization of the seizure onset zone, and investigate the clinical interest in OPM-MEG for pre-surgical assessment of refractory focal epilepsy compared with cryogenic MEG.

In an accompanying commentary in Radiology, paediatric neuroradiologist Elysa Widjaja from the Hospital for Sick Children in Toronto discusses the benefits that this further-developed technology could provide, such as allowing data collection of whole-brain signals during movement.

“Such technology would be groundbreaking for conducting MEG in young children and those with developmental challenges who have difficulty remaining still,” Widjaja writes. “Whole head coverage could improve detection of more extensive or secondary epileptogenic zone that may have been missed with limited OPM coverage and allow for more sophisticated functional connectivity analysis.”