When a CT scan highlights a suspicious looking nodule, the next step is to perform a biopsy to rule out malignancy. Current medical technologies, however, cannot provide real-time diagnostic information during biopsy. Instead, samples are sent away for histopathologic analysis, which can take several days. And some nodules may be too small to remove for further testing, leading to uncertainty and patient anxiety, as well as increased costs for further procedures and radiographic surveillance.

The ability to perform real-time in vivo detection of cancer cells could improve the diagnostic accuracy of biopsy-based diagnosis. Researchers at the Abramson Cancer Center at the University of Pennsylvania are working to develop such a technique. By combining an imaging agent that lights up cancer cells with a high-resolution confocal laser endomicroscopy (CLE) system, they have demonstrated real-time detection of lung cancer at the single cell level during biopsy. They describe their findings in Nature Communications.

“The emerging ability to light up a single cell that may be invisible to the eye provides great opportunity to give patients the best chance at an early diagnosis before cancer spreads,” explains first author Gregory Kennedy in a press statement. “This unique approach has the potential to improve the information we get from biopsies and it may increase our chances of identifying cancer early.”

The new technology platform brings together a needle-based CLE system, modified to detect near-infrared (NIR) optical signals, with pafolacianine, a cancer-targeting NIR fluorescent tracer. In their latest study, Kennedy and colleagues evaluated whether the technique, known as NIR-nCLE, could identify malignant cells during biopsy of lung nodules (the most common incidental nodule detected in the US).

Following evaluation of three ultrathin probe geometries, the Penn team employed a probe containing 10,000 optical fibre bundles with an imaging depth of 55 µm, a lateral resolution of 3.5 µm and a 325 µm field-of-view. The probe was used with a CellVizio CLE system that generates 785 nm excitation light.

Tests on human cancer cells cultured with normal fibroblast cells revealed that NIR-nCLE could identify a single cancer cell among the normal cells when co-cultured at a ratio of up to 1:1000. The team note that this is an important finding as tumours contain significant amounts of non-malignant cells and extracellular components.

To determine whether NIR-nCLE can differentiate tumour cells from normal lung tissue during biopsy, the researchers developed animal models of transthoracic and bronchoscopic needle biopsies. In the first model, they performed  CT-guided NIR-nCLE and biopsy of tumour and normal lung tissue of tumour-bearing mice, 24 h after pafolacianine administration. In the bronchoscopic model, the researchers implanted caprine lungs with tumours from mice that had received pafolacianine prior to resection, and then performed NIR-nCLE and biopsies via a bronchoscope.

In both models, NIR-nCLE fluorescence correlated with malignancy as assessed by histological staining and immunofluorescence microscopy. To evaluate the diagnostic performance of NIR-nCLE, five non-expert blinded reviewers examined all of the imaging sequences (22 from malignant and 22 from non-malignant tissue biopsies). The reviewers independently diagnosed each NIR-nCLE sequence based on the presence of fluorescent cells, categorizing the images with an overall sensitivity of 100% and specificity of 92%. Importantly, there were no false-negative diagnoses and inter-observer agreement was excellent. 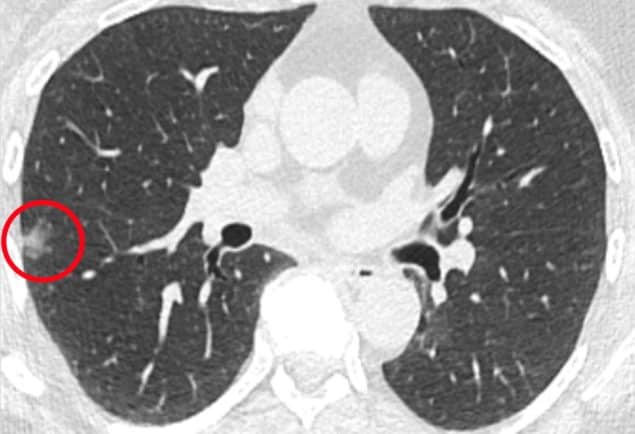 Finally, to assess the technique’s performance in human lung tumours, the team conducted NIR-nCLE-guided biopsy of tumour and normal lung tissue specimens from five patients undergoing lung cancer surgery. All nodules were ground glass opacities (GGOs), which have a soft-tissue architecture and are particularly challenging to diagnose. NIR-nCLE identified fluorescent cancer cells within the lesion in all five GGOs, achieving high diagnostic accuracy when compared with histopathologic analysis.

Five non-expert reviewers could distinguish NIR-nCLE imaging sequences within the GGOs (10 specimens) from those in normal lung (10 specimens) with a sensitivity of 100%, a specificity of 92% and an overall diagnostic accuracy of 96%. Again, there were no false-negative diagnoses and excellent intra-observer agreement.

The researchers note that this proof-of-concept study analysed pulmonary nodules as a test case, but hope that the approach can also be used for earlier diagnosis of other cancer types.

“This research shines a light on the possibility of being able to more accurately identify and diagnose lesions that could be cancerous, even those that are very small and may evade our typical diagnostic capabilities,” says corresponding author Sunil Singhal. “The quest to diagnose lung cancer in earlier stages is a centrepiece of our research, since early detection is so closely connected to chances for successful treatment.”