Respiration in living organisms is the series of chemical changes that release Energy from food material. It involves a complicated chain of chemical breakdowns, accelerated by enzymes but it can be regarded for experimental purposes as the oxidation of carbohydrates to form Carbon Dioxide and water, with a corresponding release of energy.

What is cellular respiration?

Cellular respiration is the aerobic procedure by which living cells break down glucose molecules to release energy and form molecules of ATP. Overall, this three-stage process involves glucose and oxygen reciprocating to form carbon dioxide and water.

The following equation summarizes the process of aerobic respiration, that is, respiration which uses oxygen:
C6H12O6 + 6O2 = 6CO2 + 6H2O + 674kcal
(glucose). (oxygen). (carbon (water). (energy)
dioxide)
Sometimes, this process is called tissue respiration, or internal respiration, to distinguish it from breathing-in of oxygen, which may be misleadingly called “respiration”. The energy released by respiration is used for such activities as muscular contraction, nervous conduction and secretion of enzymes, and it can be regarded as one of the most important aspects of the vital chemistry of living matter.
From the equation above, it is apparent that for respiration to occur food and oxygen must be taken in and react together.
Also, carbon dioxide and water, which are the end-products of the reaction, must constantly be removed.

The stages of aerobic respiration are:

Glycolysis is defined as the metabolic passage that converts glucose C₆H₁₂O₆, into pyruvate, CH₃COCOO⁻, and a hydrogen ion, H⁺.

Citric acid cycle or the Krebs cycle—is a number of events of chemical reactions used by all aerobic organisms to produce energy through the oxidation of acetate—that is gotten from carbohydrates, fats, and proteins—into carbon dioxide.

Acetyl-CoA is produced either by oxidative decarboxylation of pyruvate from glycolysis, which takes place in mitochondrial matrix, by oxidation of long-chain fatty acids, or by oxidative degradation of certain amino acids.

Electron transport chain is a series of electron transporters attached to the inner mitochondrial membrane that provides a means of transportation for electrons from NADH and FADH2to molecular oxygen.

The equation suggests possible ways of detecting whether an organism is respiring, and methods of measuring rates of respiration. The indications of respiration that can be most conveniently demonstrated are intake of oxygen, output of carbon dioxide or in some cases, a rise of temperature. Intake of food and output of water are less reliable signs since, in plants, feeding is not directly observable, and the giving out of water can often be attributed to simple evaporation which can occur in non-living matter. The rate of respiration of an organism can be measured most readily by weighing the carbon dioxide it produces in a given time. 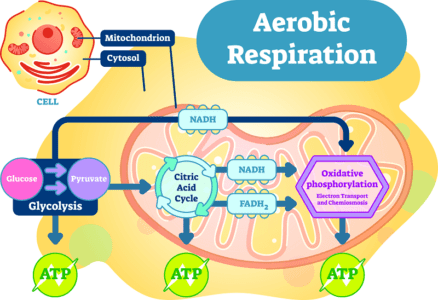 This is the release of energy from food material by a process of chemical break-down which does not require oxygen.
Certain bacteria and fungi derive all, or most of, their energy in this way. The end-products are frequently alcohol and carbon dioxide, and the energy released is less than if the same weight of food were completely oxidized as in aerobic respiration.
Many of the energy-releasing processes in the animal body are anaerobic, but ultimately the end-products are usually oxidized to carbon dioxide and water, or built up into new carbohydrates in the liver.

Glycolysis is the cellular degradation of simple sugar glucose to produce pyruvic acid, and ATP as a source of energy.

This is a form of anaerobic respiration, in which bacteria or single-celled fungi, called yeast, act on sugar or starch and reduce it by enzyme action to alcohol and carbon dioxide.
The alcoholic products of anaerobic respiration are poisonous to the organism when they reach a certain concentration and could cause it’s death if they were not continuously removed.
Most plants can continue to respire anaerobically for a long time after the oxygen supply has been cut off.

Lactic acid fermentation is a metabolic procedure by which glucose or other six-carbon sugars are transformed into cellular energy and the metabolite lactate, which is lactic acid in solution.

Ethanol fermentation, also called alcoholic fermentation, is a biological procedure which transforms/converts sugars such as glucose, fructose, and sucrose into cellular energy, manufacturing ethanol and carbon dioxide as by-products.

The post Types Of Cellular Respiration appeared first on GulpMatrix.