Ammonium chloride (NH4Cl) is an inorganic white crystalline solid substance that can be formed from the reaction of ammonia and hydrochloric acid or the Solvay process. It can also be called chloramine salt, sal ammoniac, halogen sand, nushadir salt etc. depending on the form in which it occurs.

It’s solutions are slightly acidic and it is used for various activities which range from the production of cough syrups to fertilization of crops amongst others. The acidity of this cubic crystal increases when heated and it is highly soluble in liquid substances like ethanol and water but isn’t soluble in substances such as ether and acetone.
It can be commonly found around ashes from volcanoes and gases generated from coal dumps and in the human urine. 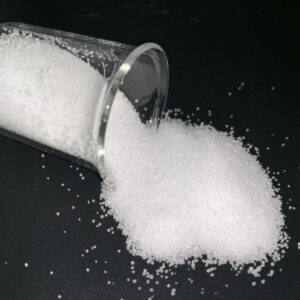 Ammonium chloride can be prepared in two major ways.

The reaction of hydrochloric acid (HCl) and ammonia (NH3) and the Solvay process.

In the first method, diluted hydrochloric acid is mixed with diluted ammonia to form an ammonium chloride solution ( NH3 + HCl = NH4Cl) which is stirred continually and heated till it begins its crystallization process.

During this crystallization process, ammonium chloride becomes visible in form of a white or colourless salt and is then heated and stirred with excess water to completely dissolve. Finally, it is cooled and dried.

However, the solution must not be heated till the commencement of granulation because heating strongly during granulation will lead to its decomposition and reproduction of hydrochloric acid and ammonia.

Ammonium chloride can also be produced as a by-product of the Solvay process.

This process which was invented by Belgium engineer Ernest Solvay in 1864 involves the dissolving of ammonia and carbon dioxide gas in a brine solution to produce sodium hydrogen carbonate and ammonium chloride.

This carbon dioxide gas is gotten from the decomposition of limestone when it is exposed to thermal heat from a furnace while ammonia gas is properly absorbed in the ammonia absorber.

They are then sent to a Solvay tower where they combine to form a solution of sodium hydrogen carbonate and ammonium chloride. 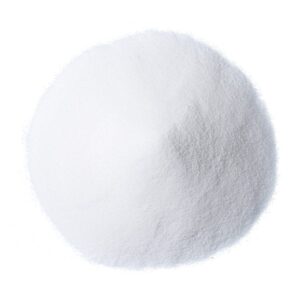 Ammonium Chloride is a tough and odourless white crystalline solid with a density of 1.5274gmL-1. Its boiling point is 338 in °C and 640 in °F while its melting point is 520 in °C and 968 in °F.
It is soluble in liquid ammonia, ethanol, methanol and water and it is insoluble in solvents like acetone and ether. It also has a salty taste but a slightly bitter.
Chemical Properties Of Ammonium Chloride
Once heated, ammonium chloride decomposes into ammonia and hydrochloric acid (NH4Cl =NH3 + HCl). It reacts with sodium carbonate to produce ammonia gas and sodium chloride (2 NH4Cl + Na2CO3 = 2NaCl + CO2 + H2O + 2 NH3) and also reacts with sodium hydroxide to produce ammonia gas (NH4Cl + NaOH = NH3 + NaCl + H20). 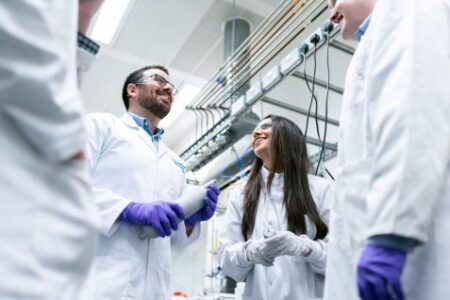 1. Ammonium chloride is used by pharmaceutical companies as an expectorant to produce medications for cough and by animal rearers to prevent livestock like sheep, goats and cattle from urinary stones.
2. Due to it being a large source of nitrogen, it is used as a fertilizer to enhance the growth of crops like rice, corn and wheat amongst others.
Its efficacy on the rice farm has led to the production of 230,000 tons of it annually in Asia.
3. It is given to livestock like cattle as a feed supplement.
4. It is used in the production of glue which holds plywood together.
5. It is a major ingredient in body products like shampoo, body wash, bleaching creams etc.
6. It is used as an electrolyte in storage or dry cell batteries.
7. It is used with ammonia to stabilize the acidity of liquids.
8. It is a major factor in the treatment of metabolic alkalosis.
9. It is used as a food additive and as a yeast nutrient in the production of bread.
10. It is used to clean metals and prepare them for soldering, grinding and galvanizing.
11. It is used as a flavouring agent in certain foods.
12. It is used as a thickener in non-alcoholic toners.

Ammonium chloride is very lethal and toxic and can cause a lot of damage to the human body system if exposed to it for a long while or ingested.
Ammonium chloride poisoning can lead to high blood pressure, cough, headache, irritation and nausea. It can also cause severe discomfort to the eyes.

The post Preparation, Properties And Uses Of Ammonium Chloride appeared first on GulpMatrix.

This post first appeared on Gulpmatrix, please read the originial post: here
People also like
Indoor And Outdoor Wear Waterproof Slippers
Biogeochemical Cycle: A Detailed Overview On The Type Of Cycles That Make Up The Biogeochemical Cycle
Conk Hair: 11 Popular Ideas & How to Style Them (Tips)
Best supplements to lower blood sugar
Jeopardy June 20 2022 Answers
How to Boost & Increase Tomato Production, Quality, and Size
Not All Science and Technology Are Neutral