Over the years, we have witnessed new technologies being introduced in the television industry. I’m sure you must have been wondering, what’s so special about OLED and what is it about?. Well it’s time to find out, just relax and read till the end.

Top Things to Do in San Francisco, Ca…
Who is Ted Boehly, the American billi…
Intel increases its arsenal against p…
Travel News and Trends Headlines Upda…

The OLED TVs were first introduced back in the year, 2013 by LG. Ever since the product was launched, it has grown very popular, although they were quite expensive at the beginning, but recently the prices has started dropping. Which gives you the opportunity to order yours and enjoy all the amazing features.

The History Of OLED Technology The OLED technology was discovered by André Bernanose and  his co-workers at the Nancy-Université in France. Their first observations ere carried out back in the early 1950s, when they observed electroluminescence in organic materials. Ever since then the more researches has been carried out and that has given us the OLED technology, which we so much enjoy today.

The first OLED device was built in 1987 by Chemists Ching Wan Tang and Steven Van Slyke at the Eastman Kodak. The device made use of two – layer structure alongside separate hole transporting and electron transporting layers.

The first OLED product was used as a display for car stereo which was commercialized in the year, 1997 by Pioneer. The first electronic product to possess the full color OLED display was the Kodak’s Easy Share LS633 digital camera. While the first ever television that featured the OLED display was made by Sony, and it was available in the market during the year, 2008.

In today’s modern world, Samsung now makes use of OLED on all their android smartphones, and LG manufactures very large OLED screens for their premium TVs. It doesn’t stop there as other major companies are now making use of the OLED technology such as, HP, Sony, Google, Facebook, Apple, Lenovo and so many others.

What Does OLED Mean ?

OLED stands for Organic Light Emitting Diodes. It is a flat light emitting technology, which is made by placing series of organic thin films in between 2 conductors.

What Makes OLED Different From Other TV Technologies ?

OLED’s panel is what makes it different from other kinds of Television Technologies. This is because OLED uses an organic material that is more costly than other displays to produce.

What Can OLED Televisions Do ?, How Do They Work ? 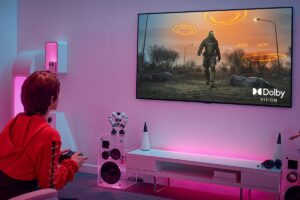 The companies which produce OLED televisions are few, and most of them purchased panels for same manufacturer, so the picture quality doesn’t change between models. The best OLED TVs possess excellent picture quality, all thanks to their ability to turn off individual pixels, which results to perfect blacks.

Organic light emitting diode has proven to represent an entirely different kind of display. No backlight is needed in an OLED Television due to it’s organic pixels emitting it’s own light, when it is being activated. This allows each of the pixel to be able to switch on and off separately.

What Benefits Does The OLED TV Have ?, Is It Worth Purchasing An OLED TV?

The advantages / benefits of owning an OLED TV goes beyond a simple static image quality, because it’s advantages extends to how very responsive and smooth the display of the OLED televisions are. If you loves games or a movie lover then you will enjoy a better TV experience on an OLED TV. No other TV technology can match up to the OLED TV’s performance.

Let’s talk about some of the advantages an OLED TV has over other TV technologies:

How Much Can I Get An OLED TV ?

Well it all comes down to this, now when searching for the right OLED TV, it’s best you weigh the features, especially the sound and picture quality. Nowadays as we stated earlier, the prices of OLED TVs are getting cheaper, although we won’t call it affordable just yet.

What OLED TV Can We Recommend To You ?

We would recommend the following OLED televisions, which will give you a nice TV experience. They are as followed :

In conclusion to all we have gone through the best OLED TVs to purchase are the ones with 4K resolution, and getting one would be worth it. So get one today. Sit, Relax, and Enjoy amazing television experience like never before.

This post first appeared on Gulpmatrix, please read the originial post: here
People also like
Top Things to Do in San Francisco, California
Who is Ted Boehly, the American billionaire who bought Chelsea FC?
Intel increases its arsenal against physical hardware attacks
Travel News and Trends Headlines Update on August 06, 2022