Acetic Anhydride which is also known as ethanoic anhydride with a molecular formula of (CH3CO)2O or C4H6O3 is an organic compound and an insoluble anhydride of a carboxylic acid. It is also a flexible molecule with a non-planar structure.

It is a colorless liquid that is corrosive to tissue and metal and has a strong and pungent vinegar-like odor that is attributed to its reaction with the moisture in your nose and the water vapor in the atmosphere to form ethanoic acid.

It was first produced by French chemist Charles Frederic Gerhardt in 1852 and can be used for many purposes which include being a re-agent in chemical synthesis amongst others. 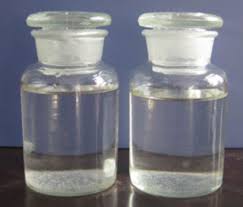 In the laboratory, acetic anhydride is produced when acetyl chloride and anhydrous sodium acetate reacts and are then fractionally distilled.

Industrially, it can be prepared using different methods:

• By the acylation of ketene and acetic acid or by their reaction at low pressure.

Other methods of preparing acetic anhydride include:

• By the carbonylation of methyl acetate.

• By the oxidation of acetaldehyde.

• By heating two carboxylic acids in the presence of strong dehydrating agents like concentrated sulphuric acid by the elimination of a molecule of water.

• By the reaction of carbon oxide, methyl ester, and acetic acid with the aid of a nickel catalyst.

• Acetic Anhydride reacts with alcoholic compounds like ethanol to form an ester and acetic acid.

• It reacts with primary and secondary amines to form acetamide.

• It reacts with water which is at a normal or high temperature to form acetic acid.

• It reacts with hydrogen chloride gas to form acetic acid and acetic chloride.

• It reacts with other compounds to carry out its acetylation reaction with sodium acetate and sulfuric acid as catalysts. 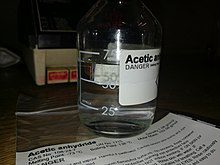 • It is used to preserve wood and ensure the durability of timber.

• It is used to produce cigarette filters.

• It is used in the production of dyes.

• It is used to convert cellulose to cellulose acetate.

• It is used in the production of pharmaceuticals like aspirin.

• It is used in the manufacturing of textile and photographic films.

• It is used as a reagent of acetylation in the production of carbonic compounds.

• It is used in the production of fibers.

• It is used in the production of vinyl acetate.

• Due to its corrosive, it is used in the production of explosives.

• It is used in the production of metal acetates.

• It is used for chemical synthesis.

• It is used as a reagent in laboratory practices.

• It is used for the deacetylation of morphine 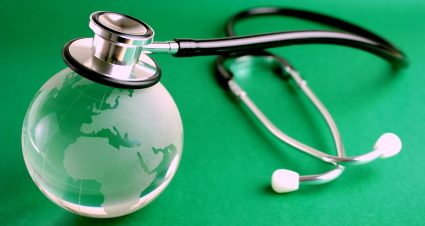 Acetic Anhydride is a very harmful and combustible liquid so it should be stored and handled with care. It is corrosive to tissue and metal and its vapour is very toxic to the human body.

Inhalation can cause damage to the nose and throat. It can also cause pulmonary edema and chemical burns to the respiratory tract.  And if the inhaled acetic anhydride is concentrated, it can cause severe coughing, shortness of breathing, and damage to your lung. If ingested it can also cause burns on your gastrointestinal tract and penetration of your digestive tract.

It is also very flammable and can explode if exposed to extremely high temperatures so you must keep them in well-ventilated areas, away from hot conditions, direct sunlight, fire sparks, or flames.

The post Preparation, Properties and Uses Of Acetic Anhydride appeared first on GulpMatrix.