Ethylbenzene is a highly flammable organic compound. It is a colorless flammable liquid with an odor similar to that of gasoline. Ethylbenzene is important in the petrochemical industry, it is a monocyclic aromatic hydrocarbon that acts as an intermediate in the production of styrene, an intermediate in the production of polystyrene, a common type of plastic material. There are several uses of ethylbenzene which we shall examine as we read along.

Density: The density of ethylbenzene is 0.8665g/mol.

Other Names: The other names of this liquid includes the following: Ethylbenzol, Phenylethane, alpha Methyltoulene.

Odor: Ethylbenzene has the smell of gasoline.

Refractive Index: The refractive index of ethylbenzene is 1.495.

Viscosity: The viscosity of ethylbenzene is 0.669cP at 20°C.

Elements: (a) Carbon (b) Hydrogen

These are the various uses of ethylbenzene which has made it a very important industrial and laboratory chemical.

[1] Ethylbenzene is often combined to gasoline to act as an anti-knock agent to help in reducing the engine knocking and to also increase the octane rating.

[3] Ethylbenzene is used in the recovery of fossil fuels, it may be injected into the ground.

[4] Very small quantities of ethylbenzene are used in solvents or as additives to variety of products.

[5]   99 percent or more of the ethylbenzene produced is used for a single purpose [the production of styrene]. Styrene is a very important industrial chemical, that ranks seventeenth among all the chemicals made in the United states in 2004.

Differences Between Benzene and Ethylbenzene 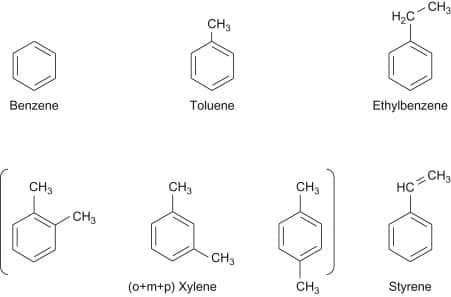 Benzene is an aromatic compound while ethylbenzene is organic compound, the hydrocarbon c6h5-ch2ch3 used in styrene production.

The concentration of ethylbenzene in some consumer products is so low that it can’t serve as a threat to human health or the environment. However, it may be a problem when it leaks from an industrial or chemical plants into the soil and then become a part of the groundwater. In such cases, it may then be consumed by living organisms (humans, animals) or it evaporates into the air, where it is breathed in by humans and other animals. Ethylbenzene has been found in half of all the sites checked in for pollutants by the U.S. Environmental Protection Agency although its concentrations are low in most cases as to cause havoc to human health or to the environment.

It also causes irritation to the skin, eyes, and respiratory system. In small quantities, it causes dizziness, tightness in the chest, and burning of the eyes. In large quantities it causes narcotic effects, producing drowsiness and disorientation.

This compound is found mostly as a vapor in the air since it moves easily from water and soil. The frequent use of ethylbenzene in the industry contributes to ethylbenzene vapor present in the air. After about three days or there about in the air, using sunlight other chemicals break down ethylbenzene into chemicals that can be found in smog. Since it does not bind to soil it can easily move into groundwater. In surface water , it breaks down when it reacts with chemicals naturally found in water. Ethylbenzene is not found in drinking water, however it can be found in residential drinking wells, if the wells are near waste sites, underground leaking fuel storage tanks, or landfills. In 2012, according to the EU Dangerous Substances Directive, ethylbenzene is not classified as being harmless to the environment.

The post Properties, Production and Uses of Ethylbenzene appeared first on GulpMatrix.