With the projected range of the AR/VR market from $80 Billion to $143 Billion, the last few years have shown how quickly both AR and VR startups have arrived on the scene. The following 3 guides help show not only the number of Augmented and Virtual Reality companies but also how they see different segments in both Augmented Reality and Virtual Reality ecosystems. 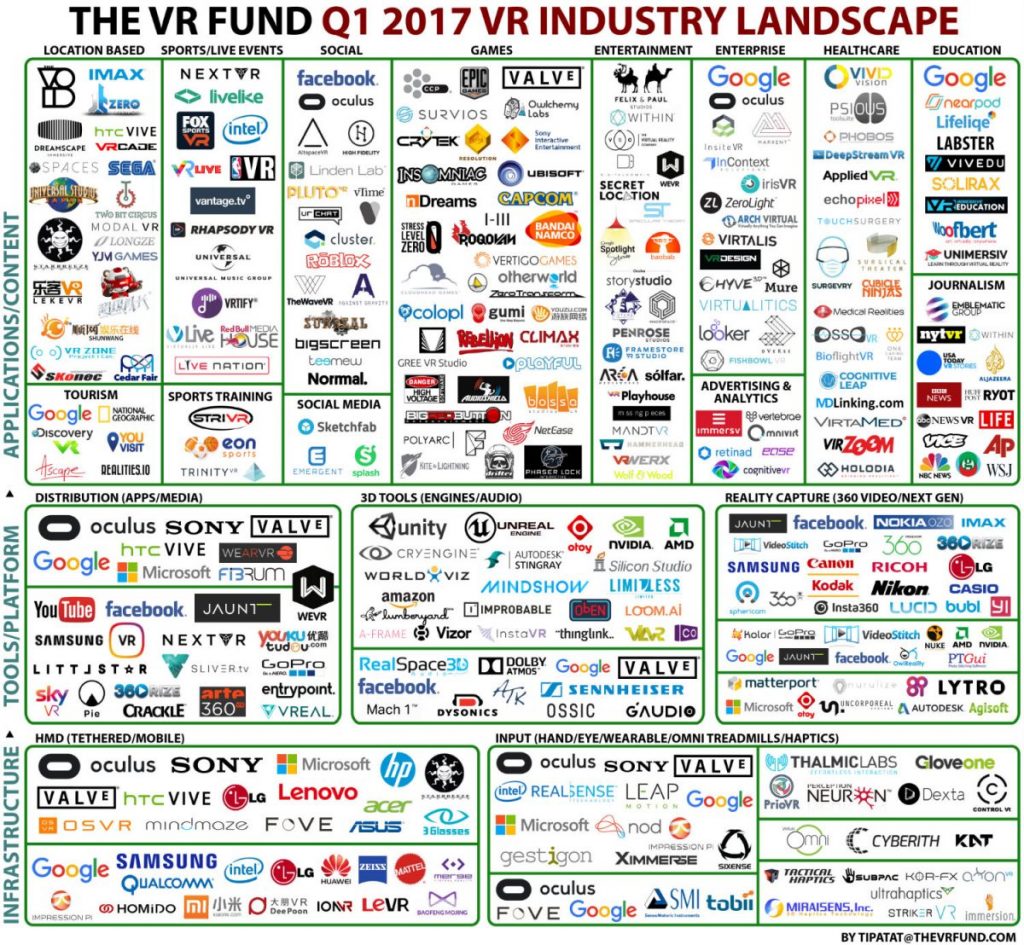 The Venture Reality Fund created the graphic above which lists all current VR startups and corporations working on Virtual Reality technology and content. The chart gives a good breakdown of Applications, Tools/Platform and Infrastructure categories and an even better job showing the vertical segments in these categories. As expected, gaming has the largest number of companies working on VR applications and content, but it’s equally impressive to see how VR industry segments such as Education, Journalism, Tourism and Live Events are growing. You can view more information on the Venture Reality Fund report (including a larger version of the graphic above) here. 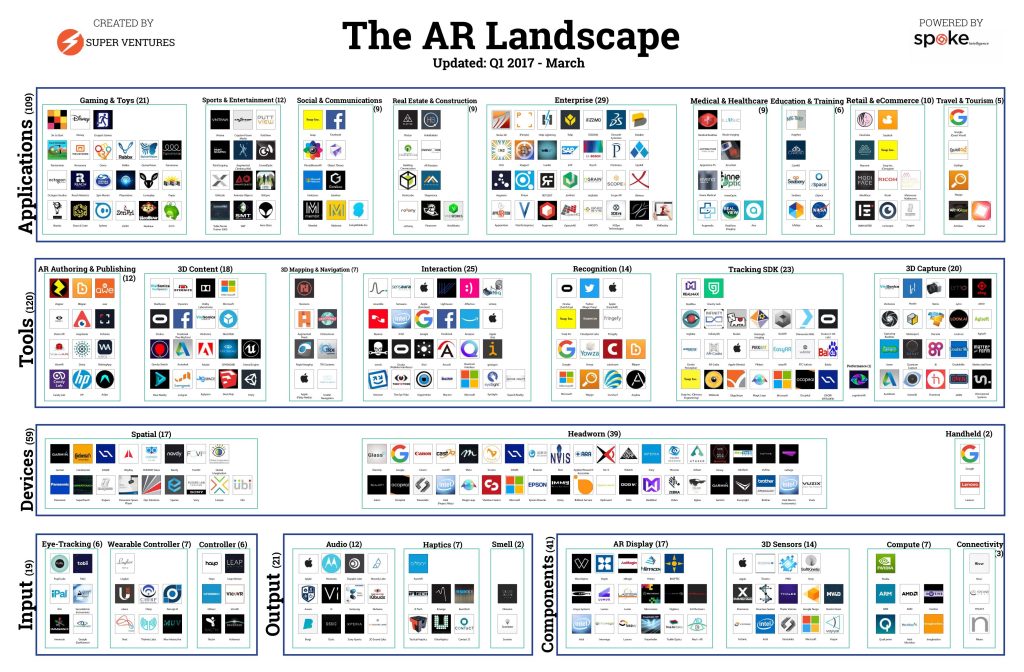 Similar to the Venture Reality Fund, Super Ventures has put together their own chart summarizing the still growing Augmented Reality startup and technology ecosystem. While the AR landscape chart has similar categories for AR including Applications, Tools, Devices, Input/Output and Components, it has an even more diversified breakdown of segments in each category. You can view a larger (and more readable) graphic of the AR landscape on VentureBeat here. The linked VentureBeat article also has some great insight into the areas of opportunities for Augmented Reality investment. 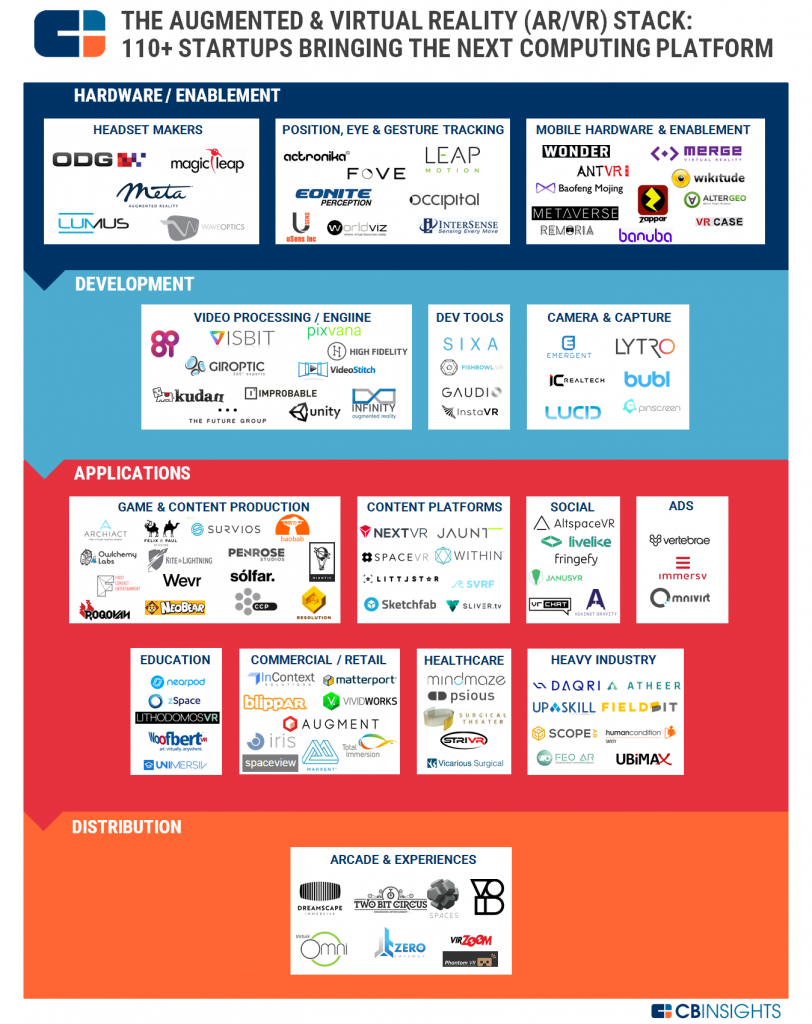 Unlike the Virtual Reality Landscape and Augmented Reality Landscape charts, CB Insights AR/VR Stack chart above primarily lists only startups with publicly listed venture capital or other funding. While the breakdown is similar to the prior charts, due to only focusing on ‘publicly funded’ startups, CB Insights isn’t capturing the entirety and scale of both Augmented Reality and Virtual Reality ecosystems. You can view more information (and larger image) on CB Insights here.

The post 3 Guides To The Growing List of Augmented Reality And Virtual Reality Companies appeared first on Zugara.

This post first appeared on Zugara Augmented Reality & Natural User Interface, please read the originial post: here
People also like
benefit of coconut milk
Social Emotional Learning Skills by Grade Level, Part I
Canadian Online Casinos at its Best
How to Price Your Craft & Design (part 2)
Review: ‘The Triangle (Expanded Edition) by Lisa Mills
Healthcare Organizations Reward and Foster the Wellbeing of Employees for Dedication During Covid and Beyond
What to wear to the beach as a bikini alternative?
Afterthoughts Part 3 - Grimdark in Genre Fiction