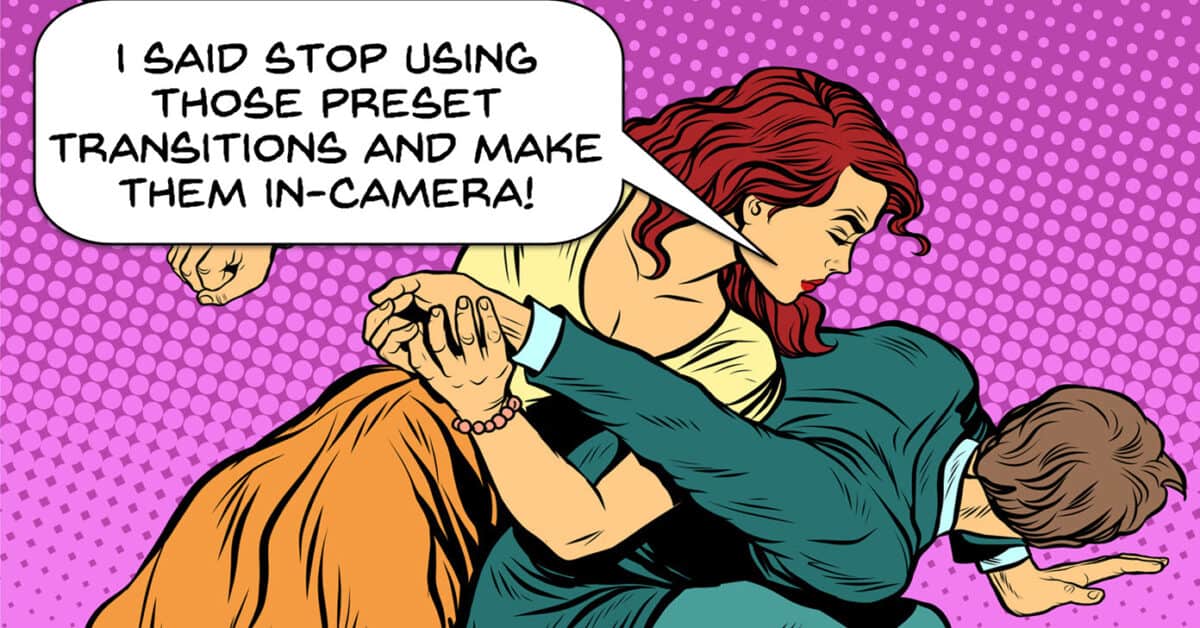 The rise of TikTok, YouTube Shorts, Stories and other short form video trends have in common that they are mostly carried out totally on a mobile device.

That means the Editing is being done mobile as well and with that comes a distinct set of limitations.

Those limitations are a result of the reduced processing power, data transfer speeds and storage space offered on a mobile device.

As is usually the case when a bunch of creatives are put under stress by physical limitations like this they come up with great solutions and workarounds.

One of those is the creation of transitions “in camera” as part of the shot as opposed to something added later in the editing software.

If you are using a mobile device to shoot or even if you are not these basic in-camera transitions are probably the best to get started with.

One point that so very often gets overlooked in the world of creating videos is the role of the shoot over the edit.

It doesn’t take very long for most newbies to realize that there is only so much you can actually do in editing software.

The real key to creating that outstanding content is by setting up the shots and getting the footage that lets you go crazy in the edit.

So, here are some basic camera moves you can start with.

How to Edit Like HOT ONES! – A Video Edit Breakdown

I am absolutely loving this latest series from Daniel Batal where he takes an in depth look at some other successful YouTube channels.

The types of channel he checks out are the ones that have progressed to a particularly high level of sophistication when it comes to the shooting and editing of their content.

This week he covers the guys from Hot Ones and we get to analyze their entire setup and production values from start to finish.

You may think that you are not operating at that level so what’s the point.

The truth is that these guys back in the day, were also not operating at that level but over time refined their content to where they are today.

Once again you will also see that there is absolutely nothing going on in their video editing or post production that you or I could not replicate in even the simplest video editing software like Filmora or Corel VideoStudio.

This is a pretty cool effect from the guys at Filmora.

As a side note here, they use one of the Boris FX presets to achieve a blur for the image being used.

You will see it in the video.

Anyway, I don’t actually think you have to use Boris for that bearing in mind it is a paid effect.

How to Merge Projects in Filmora 11

Most of the most advanced video editors even at the consumer level can these days handle a process called “nesting.”

Nesting is when you take an existing project and import it into another project without actually rendering the first one to a new video file.

The software can just treat the added project as if it was a video asset.

This is an incredibly complex process for the software to execute and generally takes some hefty computer power to pull off without endless crashing.

Because of that it is not really a feature that can be tacked on to an existing program.

Generally it requires a complete rework of the base program to have it run smoothly.

Filmora does not allow you to do this BUT!!! There is a workaround!

Filmora has been updating fairly regularly over the past few years so although the basic simplicity of the interface has been retained, there is a bunch of new stuff in there as well.

In light of that the video below is a great walk through of the current version which is Filmora 11.

It is a 40min. video covering everything from soup to nuts and worth watching if you are new to the software, an existing user looking to brush up or are thinking of using it for your video editing

This is quite a simple effect to achieve but a good exercise in knowing how to use your tools effectively.

As a side note, as you are gaining experience with your editing software it is a good exercise to check out videos like this to see how things are done BUT!!!

Before you watch the video, try to think about what you know or what you have learned regarding your editing and see if you can come up with a technique to do it yourself.

Then watch the video and see how close you were.

This is a run down of the latest additions to the CyberLink range of video editing solutions covering the 365 subscription models as well as their mobile App.

PowerDirector – Using a LUT as a Transition

To be honest a LUT is simply a set of established values for a color adjustment that you can apply to footage to get a particular effect or color grade.

There is nothing all that complex or mysterious about them.

However because they are just effects you can use them like effects and manipulate them accordingly.

They can be weakened or intensified and more importantly, keyframed.

So just like in the video below you can use that extra control to create your own transitions using LUTs.

Over the past two years there have obviously been varying degrees of isolation and lockdowns occurring all over the world.

One slightly unexpected roll on effect of that is that the development of streaming software and services has really been pushed forward.

Right now there are a number of alternatives in this field so it is probably a good point in time for a little roundup of the current scene for streaming on Windows PCs.

Grow on YouTube when a Channel is Stuck w/ Futcrunch

As I have mentioned many times on this site especially in the Friday Roundups there are only a few people I listen to when it comes to YouTube.

In other words there are many saying they are experts but only a few who really are.

In the video below Derral Eves takes another long look at just what it takes to get up and running viably on YouTube along with another of his successful students.