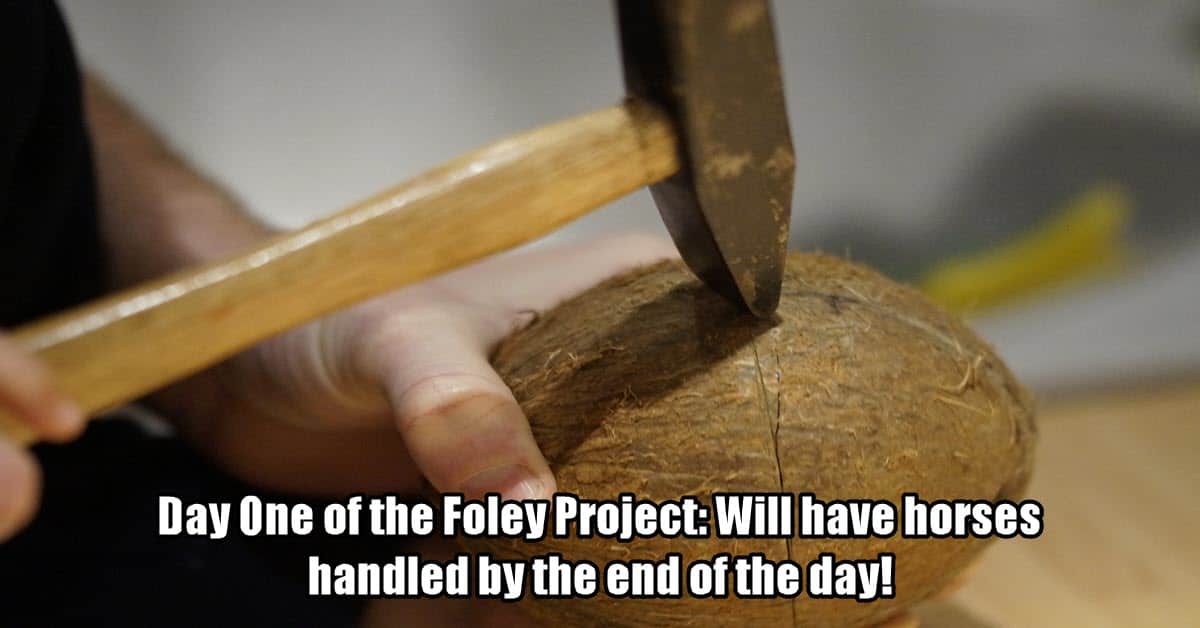 How to Create Foley

Just briefly, Foley is the art of recreating sounds in a studio to be used later as part of a video or movie sound track.

From Wikipedia: Foley is the reproduction of everyday sound effects that are added to films, videos, and other media in post-production to enhance audio quality.

When you see a western movie and hear the horses walking across the ground, you are not actually hearing those horses.

You are hearing sounds created in a sound studio by foley artists.

The reason for that is that usually when sound is recorded during the shooting of a movie or video scene, the focus is on the characters or main action.

This results in ambient sounds like footsteps and many other little things that we take for granted, not being recorded or recorded particularly well.

Those sounds are always added later and you would be very surprised at just how much of the sound you are hearing in a scene was never a part of the original.

Check the video below to get into making some of your own foley.

How to Shoot a Perfect Cinematic Match Cut

Quite a common effect that is used very effectively as a transition is a cut called the Match Cut.

Simply put it is when you cut directly from one shot to the next with no transition at all! Confused?

The reason it works as a transition and the reason it is not just a straight cut is determined by what you see on the screen in the first and second shots.

The two shots are chosen so that they match each other very closely in their composition so even though it is not strictly a transition it works as one very well.

The bottom line with most technology these days is that one manufacturer can only boast a superior feature or performance factor for about 4 or 5 months.

That’s because the other manufacturers can catch up pretty fast so that advantage disappears in the blink of an eye!

So, do they continue to invest millions in trying to outdo each other?

Hell no! That’s too hard!

What they really do is invest millions in marketing that is designed to make you think they have an advantage when none really exists to any great degree.

One of their regular “go to’s” in this battle is the old megapixel ruse.

“It’s got eleventy bagillion megapixels so it must be awesome!”

On the face of it pretty exciting, in reality… yeah not so much.

Check out the comparison video below to see what I mean.

I have been helping a friend this week set up a little space for herself to start recording videos regularly for her Youtube channel.

The available equipment was an iPhone, a tiny little tripod and… well, that about it!

By the time we finished the setup she was able to capture good looking and good sounding videos. How!

Basically by using a bunch of stuff she already had in the house that was in no way meant to be part of a video setup!

The key to doing this is not so much the specific equipment you have available or can buy.

It is understanding what is needed then finding stuff around the house that can fulfill that need.

In keeping with the previous item on Lighting for YouTube videos I wanted to add this additional video for some home video hacks.

In the previous video I mentioned the idea of understanding what is needed for shooting at home.

In this video there are some great tips for using what you already have lying around the house to improve the quality of the footage you are capturing.

How To Create A YouTube Channel! (2021 UPDATED Beginner’s Guide)

Every year YouTube tweaks and changes a lot of the settings and requirements for when it comes to setting up a channel correctly.

The problem is that in many cases it is not until long after you have set it up do you discover you should have done something differently.

Reliable information on that vital setup step is hard to come by but in the video below you can get the very latest run through along with current best practices.

Some great tips here for setting out on your YouTube adventure as well as good stuff for tightening up your current work.

Sometimes when you have set up a YouTube channel it is not until some time later you may realize the name you chose is not serving that channel well.

Naming your channel is important so in the video below you can see how to change it if you have to.

How To Shoot A Short Documentary – Run and Gun Filmmaking

One of the things that new video makers tend to underestimate is the amount of work that goes into a fully professional video or movie.

I guess you could call it a problem in understanding scale rather than anything else.

The video below gives some great tips on small documentary making but the key takeaway is the scale.

Watch out for just how much footage he is capturing for each minute of screen time.

What Frame Rate To Use For Slow Motion

The down and dirty rule for shooting slow motion is to basically shoot double the frame rate or higher than the frame rate you are intending for the final video.

So if you are going to be producing at 30fps then for slower motion you use 60fps or if you want to really slow it down noticeably you go with 120fps.

Having those higher frames rates in the video makes it easier for the software to slow the motion down without having to manipulate the existing frames.

As I said, that’s the down and dirty!

In the video below the guys from Shutterstock take a slightly deeper dive into the subject that is well worth looking at.

So as we all know the entire purpose of the internet is for the creation and distribution of cat related content.

Cat videos, cat images, cat memes and on and on.

So what could possibly be better than all that cat stuff?

Well I am glad you asked!

The answer is, all that cat stuff with added cat sound effects of course!

You can download these FREE cat sound effects with no nasty sign-up forms necessary at the ShutterStock Blog.

How to Use a LUT from Start to Finish

This is everything you ever wanted to know about LUTs but were afraid to ask!

Be warned though, it does get a tad technical in places but if you can soldier on through, it is well worth the effort.

LUTs tend to get bandied about as some kind of push button color correction fix.

This is a tutorial specific to Filmora X showing some simple through to quite complex ways to manipulate text in titles.

It deals with adding simple preset color gradients to title text but goes on to show some more complex (and fiddly!) ways to do it as well.

The more advanced method uses keyframing to add not only a color gradient but also movement as well.

Like most video editing software CyberLink PowerDirector offers a number of ways to have the timeline behave when adding assets.

There is also a set of behaviors to choose from as to how assets already on the timeline behave when other assets are added.

The video below covers a few of those choices and is specific to PowerDirector although if you take a look you may find similar functionality in your own editing software.

This is a very PowerDirector specific tutorial showing how to use some of the new special effects that have been added to the Titling module.

Tips for Working In The Timeline – DaVinci Resolve 17 Basics

If you are relatively new to DaVinci Resolve or maybe even not so new then this is a great video for you to check out.

In this one Casey just goes through a few handy tips and techniques for getting things done efficiently.

He uses one of his own projects to just move around getting things done and it’s an excellent over view of the program and its features.