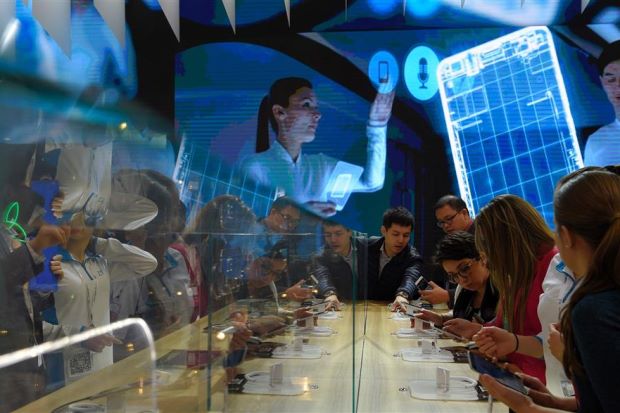 Bendable Mobile phones, quick-charge batteries and unbreakable touchscreens – technology firms are racing to harness the potential of Graphene, a wonder material which scientists say could transform consumer electronics.
A fine sheet of pure carbon, graphene is as thin as an atom, making it the skinniest material known.
At the same time though, it is 100 times stronger than steel, hugely pliable and can conduct electricity and heat better than anything else.
“There are other materials which do have one of those properties each,” physicist Kostya Novoselov – who first isolated graphene in 2004 – said at last week's Mobile World Congress, the sector’s biggest trade fair, in Barcelona.
“What is amazing here is that all those qualities are combined in one simple crystal.
“Of course that immediately leaves us with a number of possible applications.”
Graphene patents soar
Novoselov, a Russian-born British citizen, and his colleague at Manchester University Andre Geim won the Nobel Prize for their work with graphene, sparking a flurry of interest in the new material.
The number of patents involving graphene soared from under 50 in 2004 to around 9,000 in 2014, according to Andrew Garland of research firm Future Markets, who puts out a twice-yearly report on the material.
“Most are in electronics,” he said.
Samsung, the world’s number one smartphone maker, has taken out the most graphene patents – over 490 – followed by China’s Ocean’s King Lighting and IBM.
While its real-world uses so far remain modest, research into possible applications for the material picked up steam in Europe after the European Union set aside €1bil (RM4.63bil) in 2013 to be spent over ten years to investigate.
“We believe we require another ten years to get to the point where a lot of devices will start being on the market,” said Andrea Ferrari, director of the Cambridge Graphene Centre at the University of Cambridge.
The trade fair in Barcelona for the first time had a pavilion dedicated to graphene research centres and startups, a sign of the growing importance of the material to the mobile industry.
‘Can support an elephant’
Graphene is so pliable scientists predict it will one day make flexible phones possible.
British firm FlexEnable showcased a smartwatch prototype made using graphene that wraps around a user’s wrist and features a full colour LCD display that is capable of running video content.
“This sort of display technology is basically ushering in a completely new generation of mobile devices because we can start folding electronics,” said the company’s technical director, Mike Banach.
British tech firm Zap&Go, meanwhile, displayed a graphene charger for mobile phones and tablets that takes just five minutes to fully load with power.
The company is making 2,000 versions to give to journalists and to people who pre-order them, said the company’s marketing director, Simon Harris.
“What we have here ultimately could replace the lithium-ion battery in billions of devices. It needs to come down in size and up in power,” he added.
Graphene is so strong and thin that researchers believe they will one day be able to use it to make unbreakable screens for mobile devices.
“With just a few kilos you can replace all the touchscreens in the word. With just a few layers on top of each other you can support an elephant,” said Vittorio Pellegrini, director of the Italian Institute of Technology’s Graphene Labs.