Android Nougat is Google’s next major Android update, and with the search engine giant set to announce the new HTC Nexus devices next month, it begs the question, “When can the existing Nexus devices expect their Nougat update?” Well, Canadian carrier TELUS, responsible for the Android Marshmallow October 5th release date leak, is back to inform us that the Android Nougat Nexus 6P update will arrive on August 22nd.

TELUS provides this evidence by way of a target launch update chart, in which we see that the Nexus 5 will get only a security update on August 1st (no Android Nougat for the Nexus 5 despite the rumored testing, I’m afraid). The Nexus 6 will see a security update on August 1st, but no Android Nougat update has been rumored for this device, either. The Motorola Nexus 6 is now two years old (will be this Fall), so it seems as though its chance at Nougat is very, very slim as well. The Huawei Nexus 6P and the LG Nexus 5X are both given August 1st security updates, but they also come with the “Android N update,” as revealed by the details section of the chart beside both phone monikers. The date for the Android N update, or Android Nougat Nexus 6P update as Google has now named it, will be August 22nd, if the chart is right. This is just 4 days away, right around the corner, so diehard Nexus users won’t have to wait too long.

The Android Nougat Nexus 6P update brings all the new features such as split-screen mode and background updating along with a slew of other features that are too numerous to detail here. With that said, it should also be made known that despite the claim that the upcoming LG V20 will be the first Android Nougat smartphone, Google will give the Huawei Nexus 6P and LG Nexus 5X the first opportunity to taste Google’s next sweet treat — which doesn’t make the LG V20 all that appealing (unless you’re the a non-Nexus user who wants to get it first).

The TELUS update list, apart from the typical security updates for current smartphones and the Android Nougat Nexus 6P update for Google’s 2015 flagships (the Nexus 5X will also see the same update, since it’s also a 2015 Nexus phone), also shows the Samsung Galaxy Alpha and the Galaxy Note 3 receiving bug fixes. These two smartphones are certainly outdated at this point (the Galaxy Note 3 was released in October 2013 and is now nearing 3 years old), but Samsung continues to update the device for its users. This goes against the claim that Samsung abandons its devices and doesn’t provide critical security patches for a year after the devices are denied major updates. There’s a 3-year policy in place for security patches and an 18-24-month policy in place for Android update eligibility.

All in all, the Android Nougat Nexus 6P update looks to be on its way soon. And while LG V20 buyers will enjoy Nougat pre-installed, OG Nexus owners will be the first to have bragging rights in Android. Google’s “Nexus first” update policy is one of the many reasons why Google has such a devoted following in the Android space. 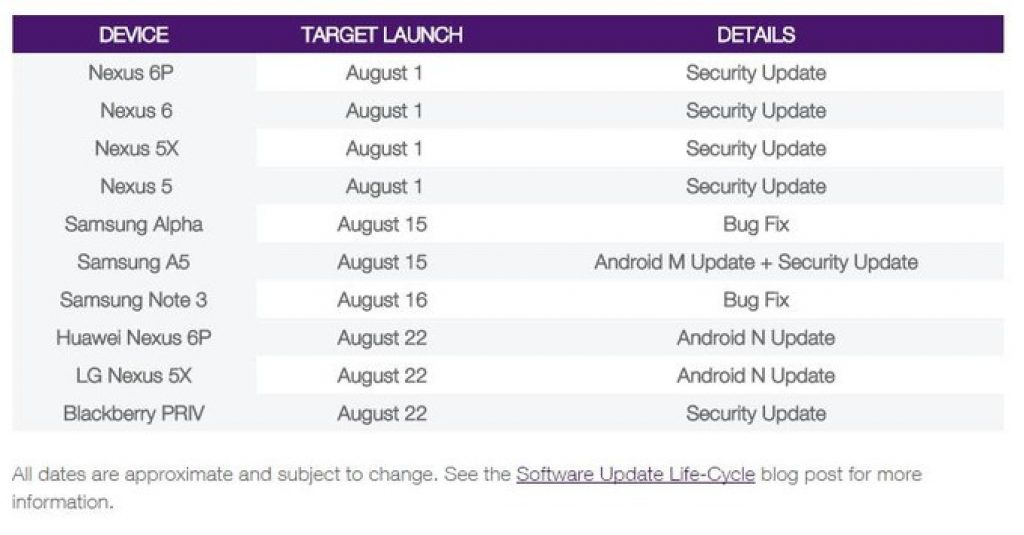