The LG V20 is poised to be the successor to the LG V10 released last Fall as LG’s highest high-end flagship (the LG G5 was the more popular one). That has now been confirmed as such by the company’s own press invite sent out by the Korean OEM recently as a way to generate publicity and excitement for September 6th, the day of the announcement. As I said when talking about the company’s press invite, the “Play More” statement seems to hint that the LG V20 will feature a Modular design. After all, at the company’s LG G5 announcement at MWC 2016 back in February, LG talked about bringing back the fun to smartphones — then pulling the battery out the bottom of the G5, to the applause of the audience. So, we’re not surprised to think that an LG V20 Render would showcase a modular design for LG’s highest-end flagship.

Dead Ends in Cryptanalysis #2: Timing…
What Is the Worst Credit Score?
10 Simple Tricks for an Easy Garden M…

And the latest render does not disappoint (or so it does, depending on perspective) in that regard.

The LG V20 render presented here in a few photos (courtesy of Android Authority and OnLeaks) shows some things we’ve already perceived about the handset. First, we can see the back-mounted fingerprint sensor matches what we’ve seen on the LG G5 (which is a horrible design decision, by the way), not to mention the dual camera lens setup will arrive to the LG V20 as well. It looks better designed in the LG V20 render than the LG G5’s dual-camera lens setup appears in real life, though the silver metal trim around the camera only accentuates how hideous it’ll look in person. It’s a pronounced touchup to a “robot eyes” setup that is already proving to be a turnoff on the G5.

USB Type-C charging, the 3.5mm headphone jack, and the three small speaker cutout at the bottom of the phone remain, though some have changed places: the 3.5mm headphone jack at the top of the G5 is now on the bottom in this render (though LG could keep it in the same place when the V20 is unveiled); the bottom microphone, on the right side in the G5, gets moved to the left bottom side on the V20; the three small speaker cutout, on the left bottom side, ends up on the right bottom side on the V20. 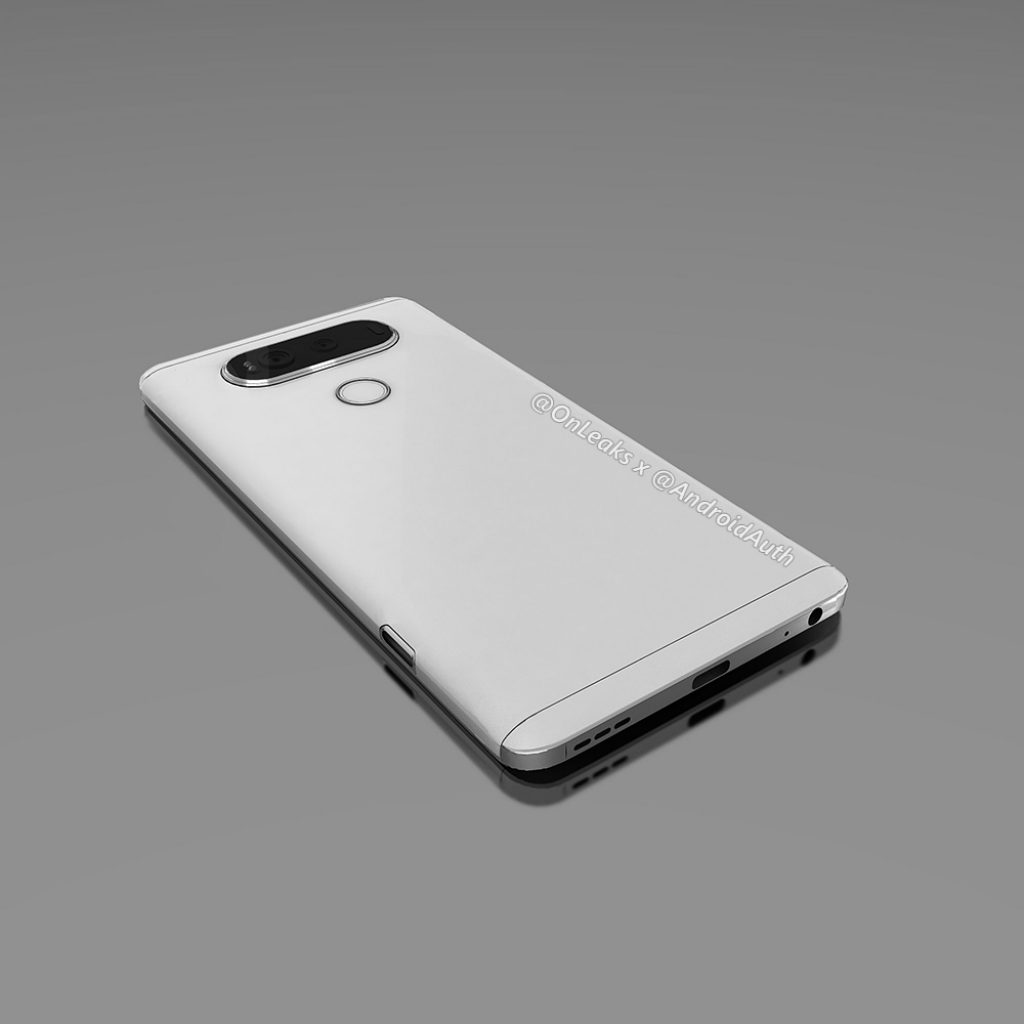 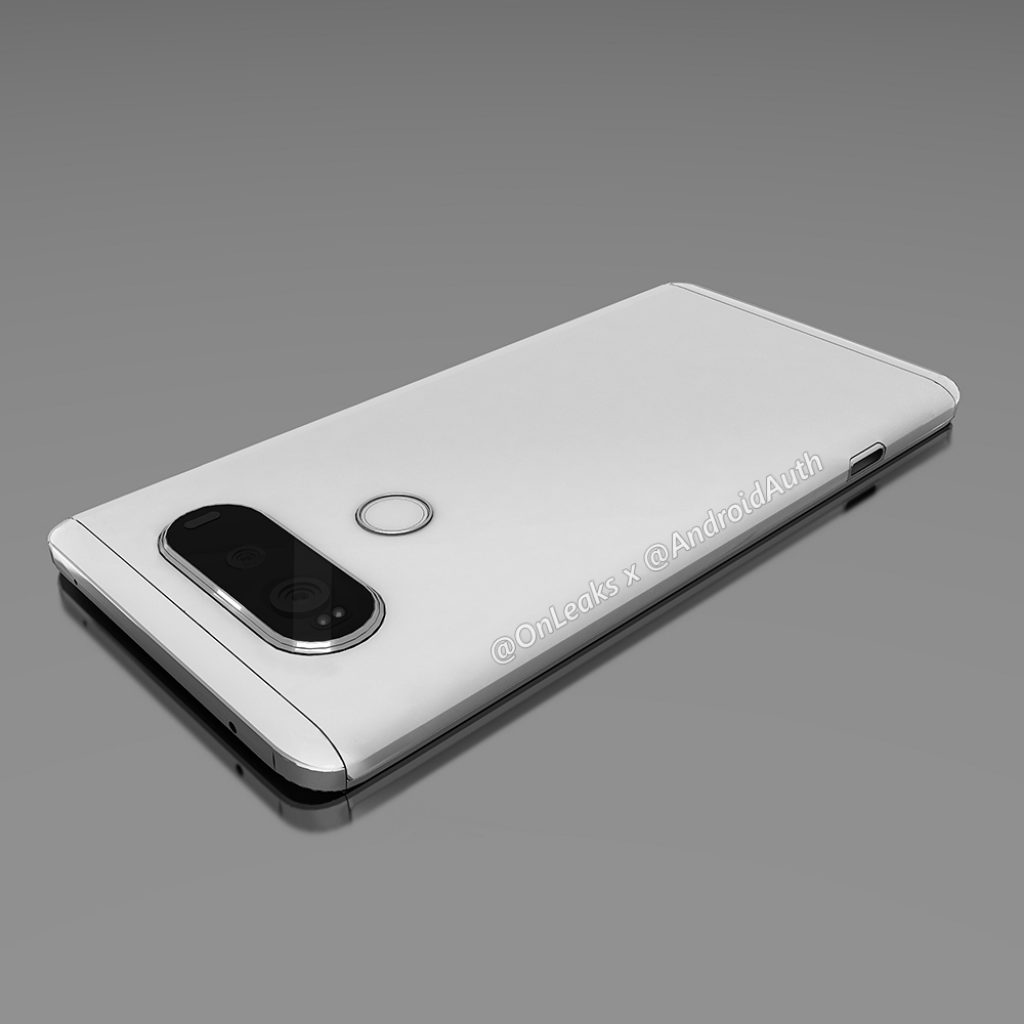 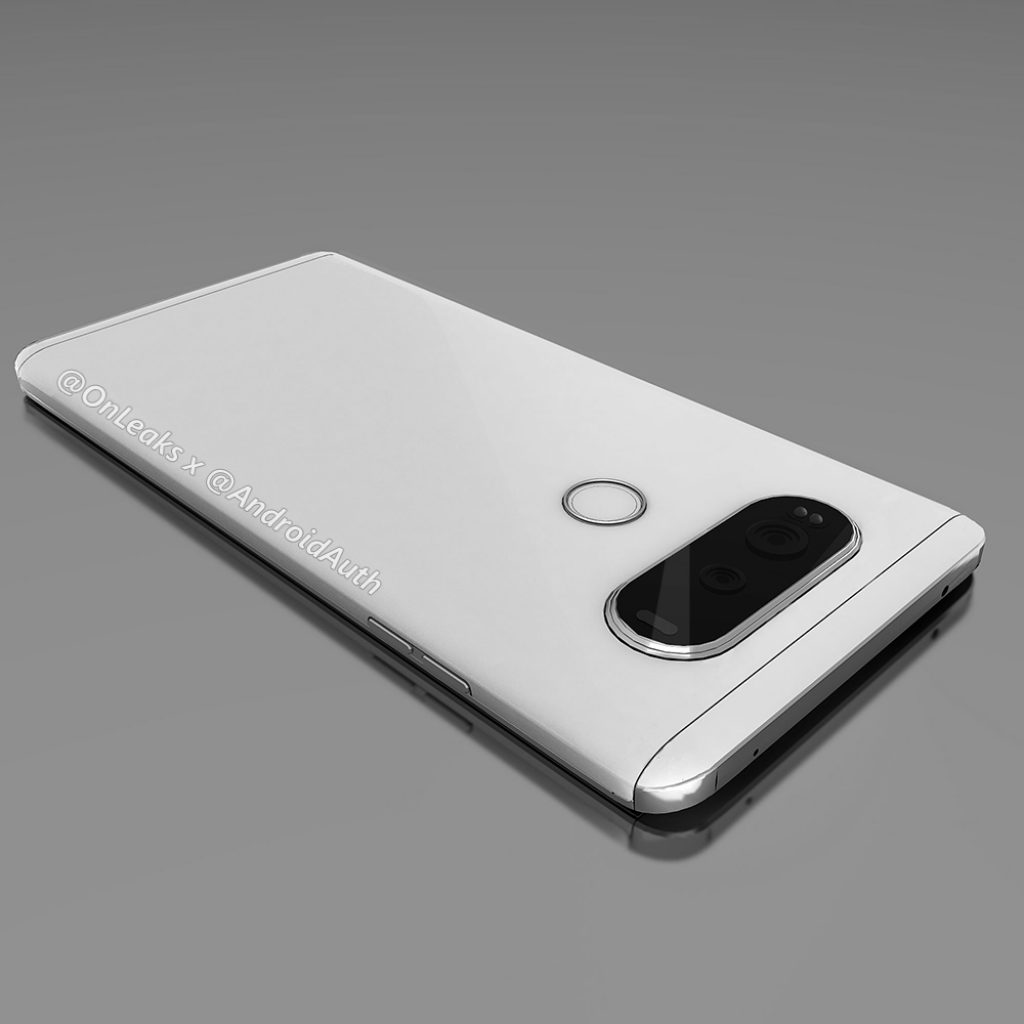 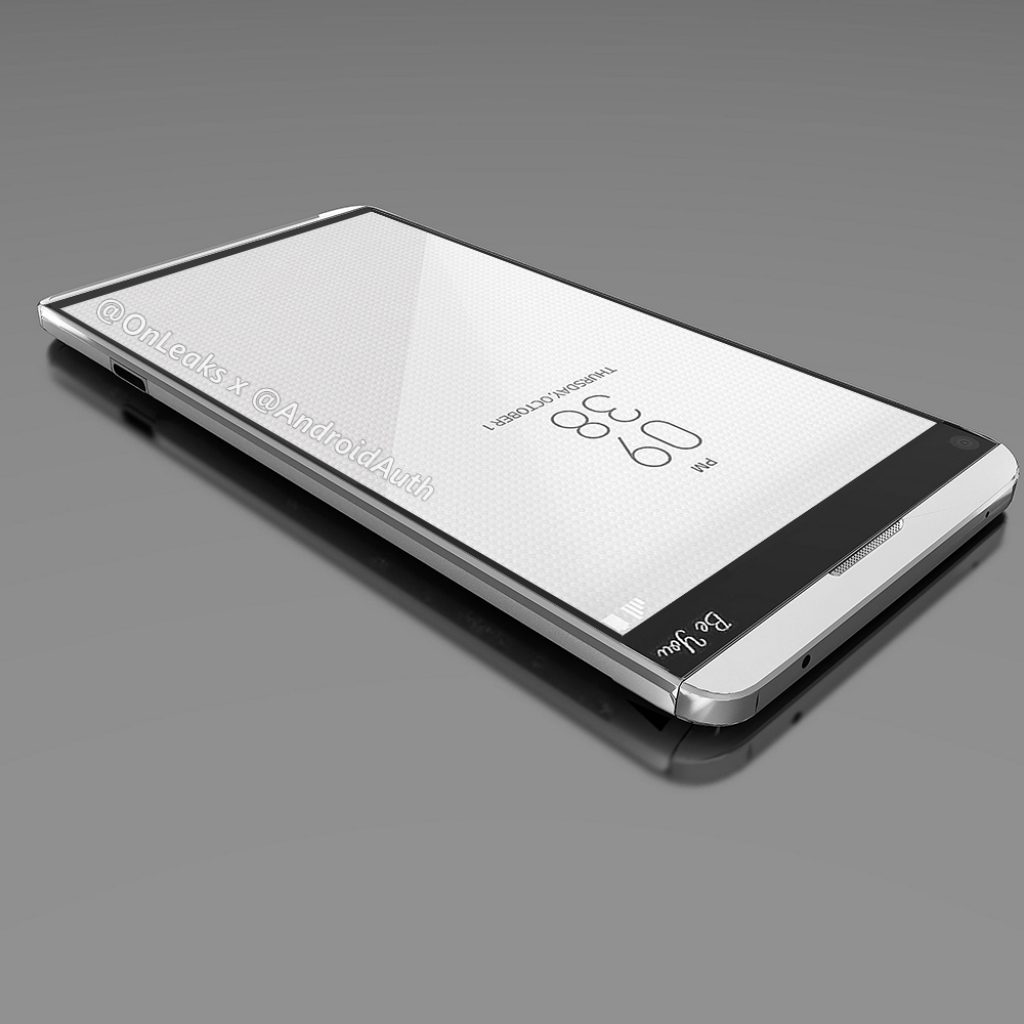 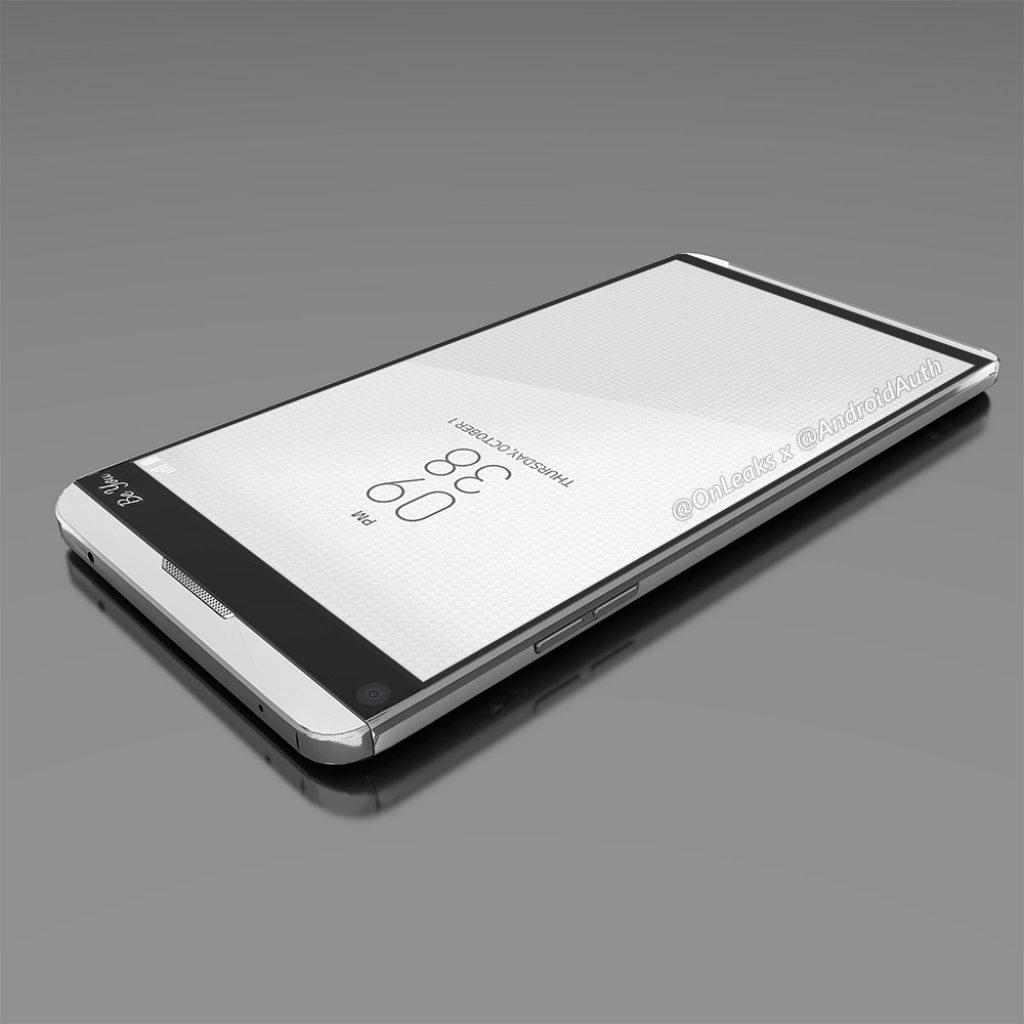 The LG V20 render also shows what is being perceived as a modular design. The bottom portion of the device looks as if it can be removed, matching the same detachable portion on the G5. Again, as we’ve said in our G5 review, the bottom portion is susceptible to dust and dirt getting in-between the crack and the top and detachable portions. Cleaning out a room yesterday, I witnessed dirt and dust get trapped inside the small crack between those two phone pieces.

Additionally, the top of the phone in the LG V20 render also looks detachable — which is a small change from that of the LG G5. With the side button that is moved up higher on the V20 than on the G5, it appears as though LG intends to make this device more “modular” with more removable parts than even the G5. The problem with the modular parts is that, after removing and inserting them so many times, they stop aligning themselves properly. This will be a problem doubly multiplied for the new handset here in the LG V20 render than in the G5 released earlier this year.

The LG V20 render also shows distinct Volume Up and Volume Down buttons as opposed to the G5 Volume rocker that has one long button on which the user has to “guess” whether he or she is turning up or down the volume. The date on the LG V20 render is October 1st, which matches the month in which the V10 was released, though LG has sent out a date for September 6th this year — so we can put the date confusion to rest.

The LG V20 render still retains the edge notifications of the V10, with the black bar at the top of the device with the words “Be You” mimicking the same exact location on last year’s V10. What this tells us is that LG intends to stick with the “LG Edge” layout of the V10, while adding a modular nature to this high-end handset. As can be seen, though, the handset does appear to be aluminum metal — which could kill the water-resistant nature of the device as well as any chance of bringing wireless charging to the V20 in September.

These are all the insights that can be gleaned from the LG V20 render, but they show us a few things: 1) LG is committed to its modular design, meaning that the G5 modules may work well with the V20 — allowing buyers to have some significant investment in the long-term; 2) the V20 will have a modular design, as does the G5; 3) the aluminum metal design of the V20 will eliminate the water and dust-resistant nature of the V series; 4) the aluminum metal design will keep wireless charging away from this device; 5) the back-mounted fingerprint sensor is a bad design decision, that, like the modular design, will turn away a number of consumers who’d buy the device apart from those things.

What do you think of the V20 render seen here? Would you be interested in a modular V20 this Fall, or has LG already placed itself outside of your top list of smartphones for 2016?