The HTC 10 wasn’t announced in HTC’s announcement video as water-resistant, which means that, if the device had any water-resistant endurance, the company behind the phone would have to come clean about it, either way. Well, that’s exactly what has now happened, thanks to some inquiring voices on social media. One individual posed a question about the device and got an answer that makes it a first on HTC’s flagship. 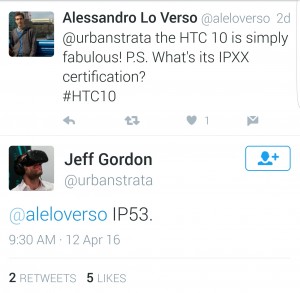 The HTC 10 has splash Resistance at IP53, which doesn’t put in on par with devices such as the Xperia Z5 (which has IP68 water resistance), or the Galaxy S7 and Galaxy S7 edge that both have IP68 Water Resistance. What this means for the HTC 10 is that you can take the device around small shoots of water (water sprayers, for example), but you shouldn’t dunk the HTC 10 in water or use it in the shower to go for a swim. Keep in mind that the first number in the Ingress Protection (or IP) rating, “5,” refers to the water resistance, while the last number, “3” in this case, refers to dust protection. As can be seen, a dust rating of “3” isn’t good at all, not enough to prevent dust from contaminating the device if it gets inside. In other words, do what you can to keep this device off the sand at the beach and away from a pool or the ocean waves.

Now, we realize that some HTC 10 buyers may be disappointed at this, but there’s no reason to be: the HTC One M7, One M8, and One M9 all lacked water resistance of any kind, so at least there’s more protection with the HTC 10 than any of the company’s last three generations of flagships. Once again, you’ll have to be careful with this device, where you take it, and where you allow it to be should water accidents happen. HTC had to save money this year while trying to make its device the best it can be (the company has financial decline to fight), but we hope it will pour financial resources and time into waterproofing the HTC 11.