Let us all celebrate and welcome the newest intellectual property by Ubisoft! Tom Clancy’s The Division is a third-person shooter with some strong emphasis on RPG like shooters like Destiny or Fallout 4

But there’s no-one celebrating in The Division. As far as the main story goes New York City isn’t preparing for any festivities here, on Black Friday a small pox pandemic, which is transmitted via banknotes (also known as “the bank flu”) causes a widespread chaos with Manhattan under quarantine. The U.S. Government activates sleeper agents in the population who operate for the Strategic Homeland Division, or simply “The Division”, to assist emergency responders, now called the Joint Task Force (JTF), in restoring order and bringing peace to New York.

The Division is as you might have guessed set in a dystopian setting for the entire game. Government has crumbled, emergency services have dissolved, food is extremely hard to find and people are fighting for their lives, thus the formation of factions coming into play: the Cleaners have a main focus of trying to eradicate the city of the disease by subjecting citizens to their flamethrowers. The Rikers are escaped convicts just itching to take over and will be hostile to anything and anyone who gets in their way. The other two factions found in the game are the Rioters and the Last Man Battalion, while the SHD and CERA are the only ones who just want to be the Good Samaritans. 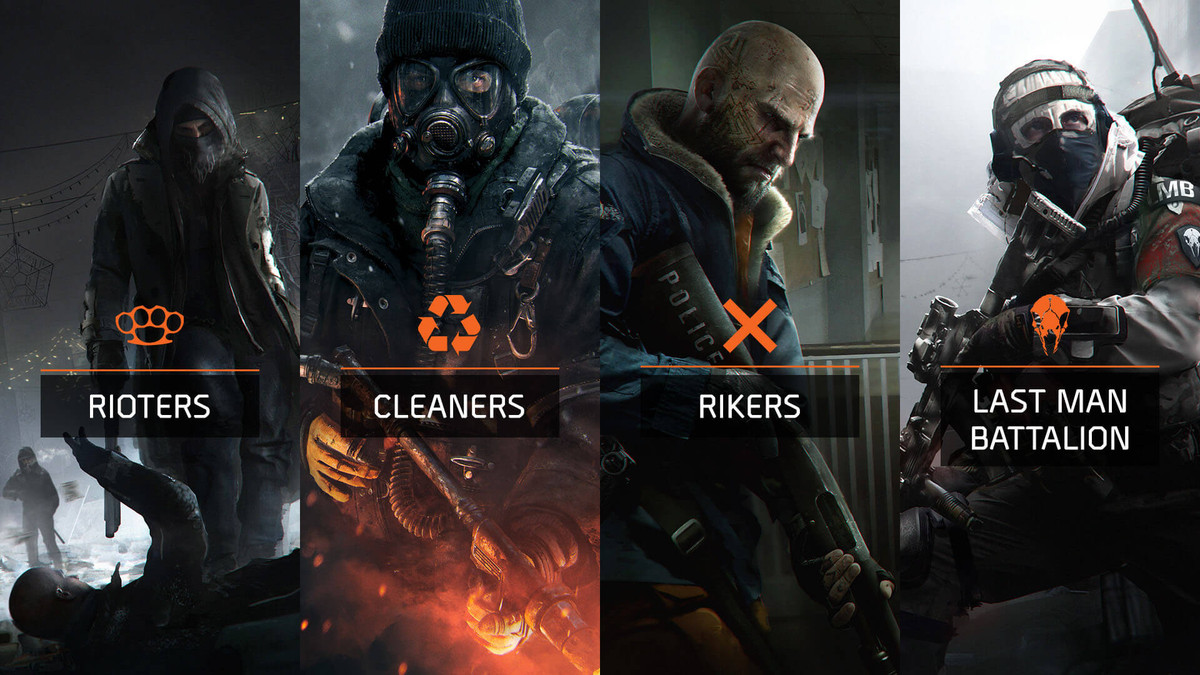 In the game you take control as a Division Agent, part of a team of sleeper agents that have been awoken to save New York from the chaotic state it sits in. With the fate of New York resting on your shoulders.

The Division is running on the Snowdrop engine and my does this game look phenomenal the atmosphere found in the game and the realism of the engine the game runs on gives you that since of depression as you walk the snowy streets of New York with the Christmas lights and decorations spread out and seeing the cars on the side of the road piled up, and body bags of those who died from the virus, it’s also worth mentioning that the game will track your footsteps in the snow.

Ubisoft did a perfect job of putting yourself inside this dystopia. If you’re playing it on the PS4 or PC versions the visuals looks extremely impressive, however the Xbox One graphics are still pretty real to put you in the vibe of what’s going on, they really make you feel as if you were actually affected by this pandemic.

While the game does offer nice post-apocalyptic atmosphere I was slightly disappointed. Anyone who has seen the trailer, the commercials, and play the game would know that the virus has vastly affected the setting, but what really bothered me was the untapped potential, where were those infected? We saw how it affected New York but what about the families? Or someone in the within the faction(s) or even your very own agent? I would have love to come across someone who was infected with the virus like some kind of zombie or something or if the virus somehow affected your division? It would have made an interesting storyline, and would mix up the enemies with diversity from humans to zombie like citizens.

When I started playing the game, many of my friends have told me “It’s just Destiny in New York” for those who might not know, Destiny is a first-person shooter MMORPG developed by Bungie in 2014. I am going to have to stop everyone right there on that statement and make this quite clear, The Division and Destiny are two completely different games, while the two games might share similar DNA in terms of gameplay elements in the sense of their online multiplayer games with hub-world like areas. You cannot compare the two as they may be similar in many ways they both have enough distinction to make it their own game.

To start off with, The Division is a lot more tactical in its play style playing similar to other rational shooters with the Tom Clancy license. It’s very much an RPG numbers game, with higher level enemies taking several thousands of points to bring down the little buggers but it requires careful planning, a considered load out and careful use of skills to take on a campaign mission.

Anyone who has played both Destiny and The Division knows that Ubisoft’s shooter has a clear storyline, and although it might not be a AAA game with a strong focus on story like a video game, but the story has strong emotion it makes a clear reason as to why you are in the situation you are in. I should make this clear I do not hate Destiny in fact I love the game but you can’t compare these two games as they are diverse and have their own quirky things that make them unique. 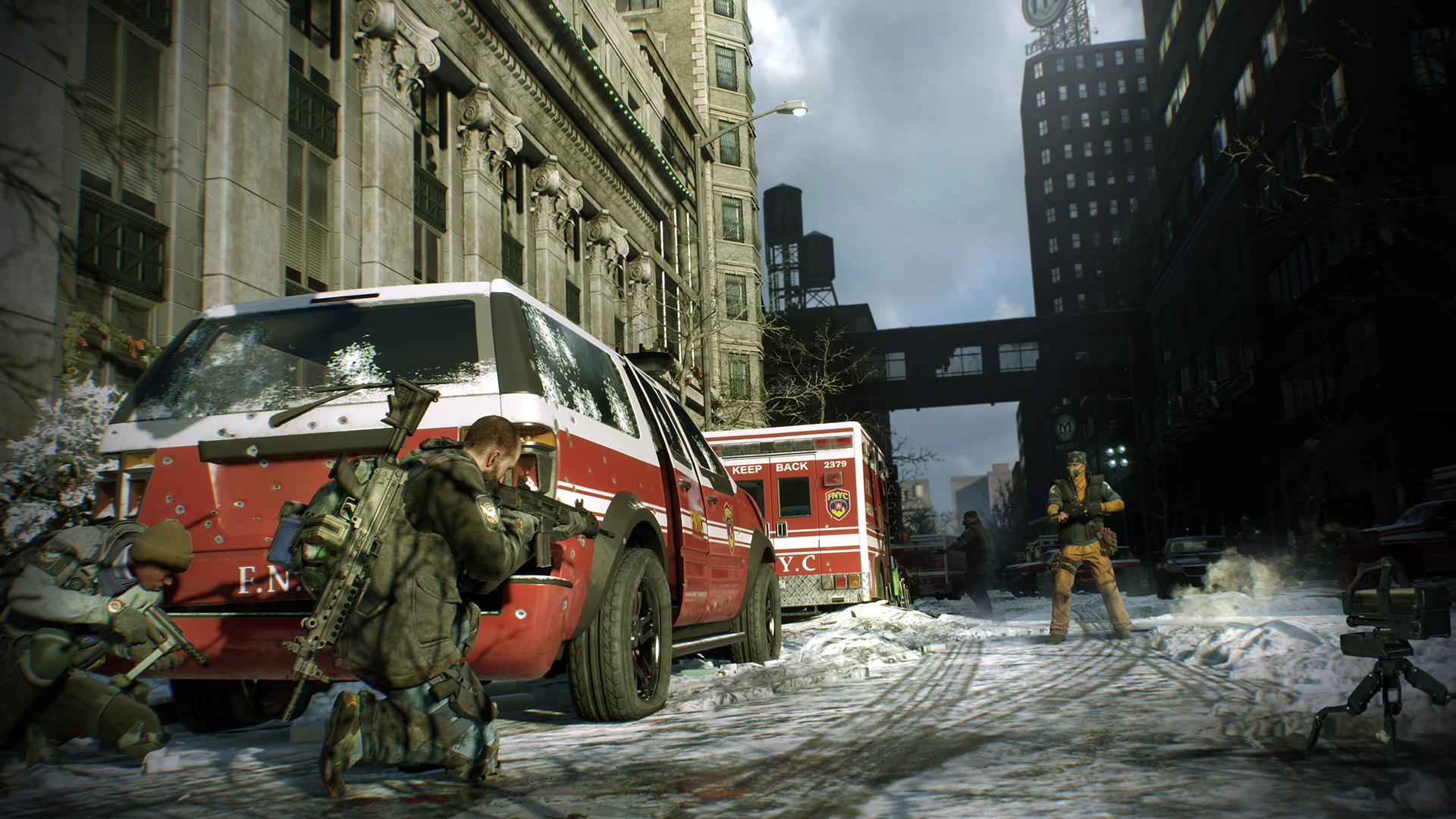 It all starts with you building your Base of Operations (BOO), which is comprised of three wings: Security, Tech and Medical. Once you establish each wing, this will open up a ton of content – campaign missions, side quests, encounters etc. The more you complete within the game, the greater chance you’ll have in evolving each of the three sections, and the better perks and talents you’ll unlock, which in the long run will better prepared you’ll be to take back New York.

The evolution of your Base home ties into the progression of your character too, which is just an example of how deep the progression system is in The Division. There are three separate character traits that develop the more you play: two ability slots such as sticky bombs or health-related skills; talents that are affected by doing specific actions; and perks that are permanent changes to your gameplay.

This made the first few hours of The Division a bit tedious. There are so many systems and menus that everything can get a bit confusing and somewhat frustrating for those with little patience. But once it all clicks though, you’ll be flicking through menus like its nothing, working out which talents work best with your gear, whether your abilities fit into your team structure and how best to mod your weapons, you see that’s another thing I really enjoyed about The Division the weapons. Feel unique in there own way that it makes you feel rewarding when you find a new one in each gunfight you win. 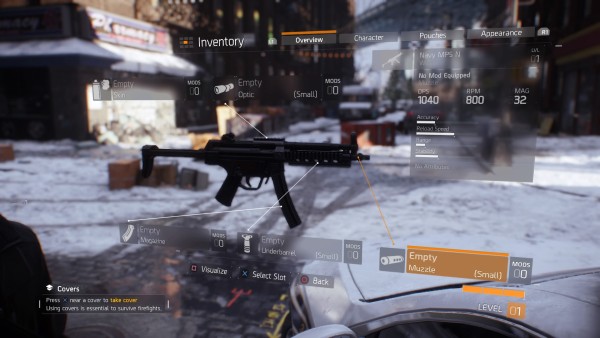 That’s tied into the expansive loot system too. Every time you down an enemy there’s a chance of collecting some gear, or just ammo or health packs, which we’re equally grateful for as The Division is a challenging game. Because of that, some are saying that those opening hours are a bit redundant. It does take time for you work out the various systems and attempt to nab yourself, some effective loot. But it feels no more grinding than any other game, and because you’re not repeating the same missions and maps over each mission you leave to feels like a new adventure, in a new area.

My advice to you is only say that anything minus the story missions, are better done alone. You’ve got more time to take in the beautifully rendered world around you, scout out the encounters and work your way around the map. Although this is very much pegged as a multiplayer game, there’s plenty to do on your own time and that makes the antisocial part of us extremely content. Multiplayer is suggested rather than enforced, and you will struggle to take on the main missions on your own pace.

This is The Division’s interpretation on PVP, where teams of Agents can go head to head if they so wish. But for us, the main aim of the Dark Zone is to nab yourself some of the more rare loot that can’t be found in the main game, it’s a give or take and you can look at it in anyway way you see it.

Working out what other players are thinking makes the Dark Zone a very tense place indeed think of it as every man for himself cutthroat kind of way. So make sure you know who your friends are before stepping foot in the Dark Zone, as those you meet in PVP have no hesitation with taking all the loot you worked hard and grind for.

While I did have issue with going rogue as the game will punish you for going rouge it was a bit disappointing as the marketing campaigns were encouraging players to go Rouge, but the PVP is still pretty fair from what I can see. But that’s the only issue I had with Dark Zone. Luckily for me though, these troll-like characters are a rarity when it comes to the experience we’ve had in the Dark Zone. I was lucky enough to grab some sweet gear thanks to the friends I made through matching making. Despite the online matchmaking being plagued with laggers, hackers, and corruption of mean people who have a goal to pick on people they deem weak; despite all that Ubisoft makes it clear through PVP that they try to equally balance this out so the balancing is over excessive.

There’s no getting away from the fact The Division is quite possibly the best open-world that Ubisoft has ever created, while the gameplay is consistently entertaining and cohesive. The deep RPG elements and tactical gunplay just add to that. Plus, the fact you can get so much enjoyment out of being a solo player, with that experience heightened by buddying up, is quite the feat.

Playing The Division is a bit like having the flu – you can’t get it out of your head and it doesn’t ever want to let you go. But unlike the flu, you won’t mind at all. The game perfectly executed artificial intelligence and role-playing like bullet sponge enemies make firefights very challenging, most games today lack this type of challenge it really tests your in-game shooting skills; having to adopt different tactics to try and outsmart them really makes you feel outnumbered. Your best weapon is your wits and that of your teammates working together to effectively take out the enemy.

Is The Division perfect? Nearly. Are there a few bugs? Yes. But you have to understand, this is the first game in a new intellectual property you can’t expect it to be absolutely perfect by catering to everyone in the gaming community. With all of the content that is offered in since launch day, the solid gameplay mechanics, tactical co-op experience, and gorgeous open world it was more than a great idea for Ubisoft to delay Tom Clancy’s The Division as long as they did, because the finish product was amazing.

Everything was more than I could have ever imagined. Ubisoft had to figured out what worked well and what didn’t work well. To bash Ubisoft when this is the first installment in the series is irrational, if you feel that you got ripped off for the story I can understand your frustration, it can be argued both ways in the sense that it is irrational, or not however, Ubisoft promised us 1 year worth of DLC so I am more than positive that Ubisoft will continue the story and pick up right where it ended so I ask you don’t be mad and say “Ubisoft messed it up” as I have stated this is a new IP, they needed to see what worked and what didn’t work and I am looking forward to future installments in The Division.