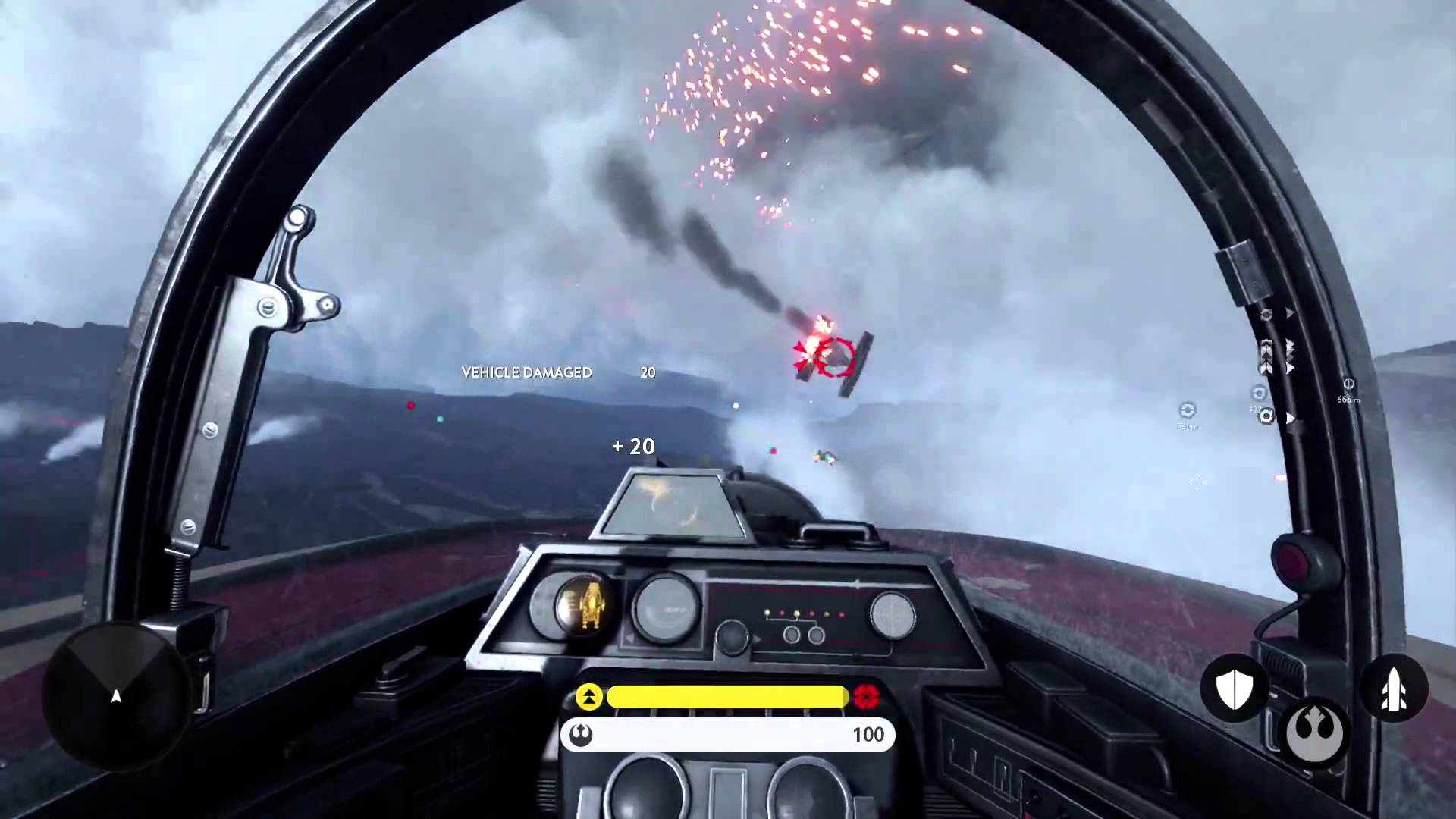 While Star Wars Battlefront can arguably be placed on “most disappointing games of 2015” as well as this list; this game deserves an honorable mention. The graphics of Battlefront were some of the best produced on eighth generation consoles, the living proof of what exactly the Xbox One and PlayStation 4 can do as well as the potential that lies inside both home systems. Electronic Arts screwed up huge by carving the living soul out of this game like a thanksgiving turkey; but they have made some changes and have offered some new maps for gamers to play on, without having to buy the $50 season pass. Battlefront may have started off roughly, but you cannot deny that this game is visually impressive and puts you in the shoes of a solider on the Rebellion or the Galactic Empire. 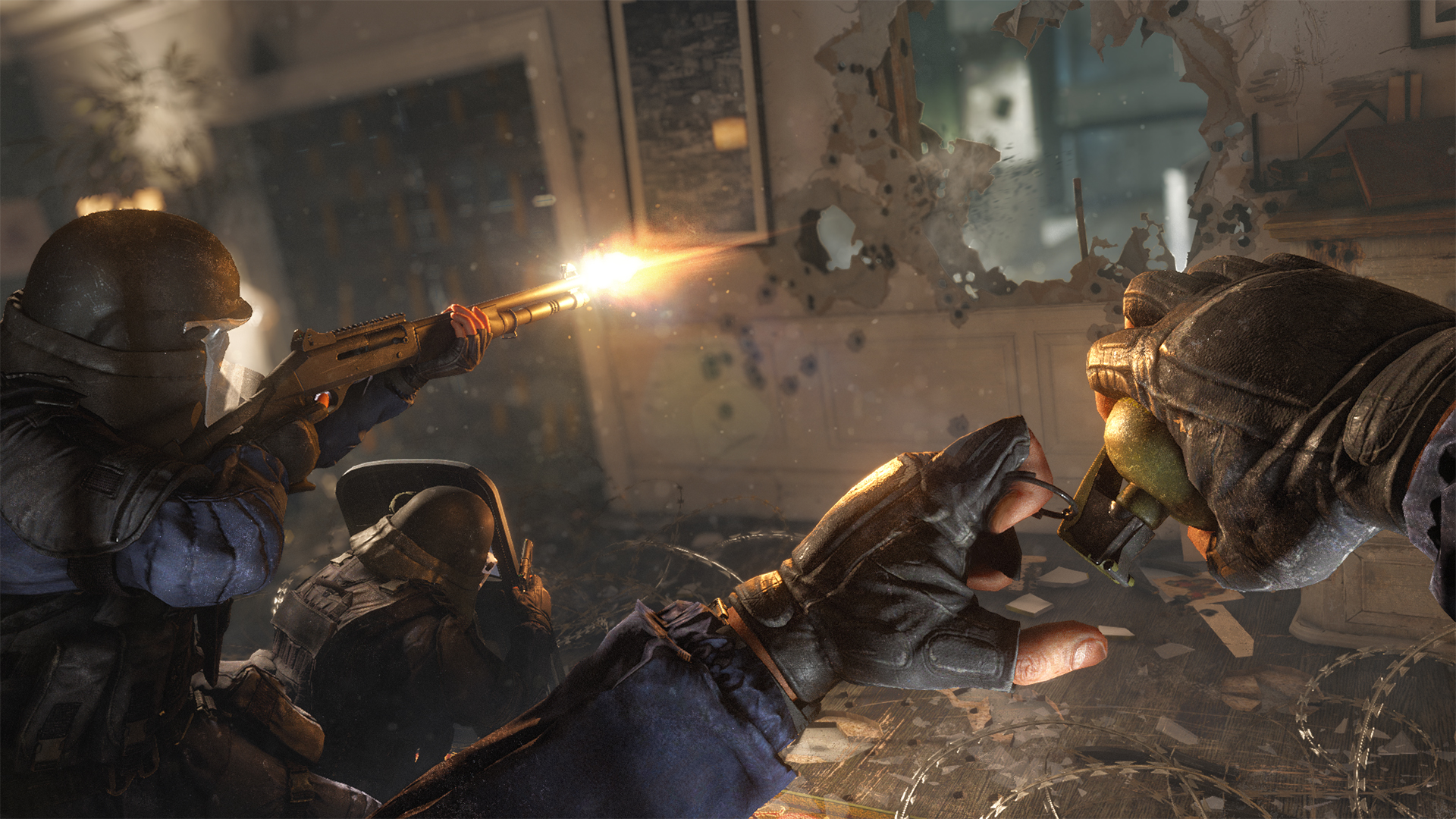 A successor to the cancelled Tom Clancy’s Rainbow Six Patriots, Siege puts heavy emphasis on environmental destruction and co-operation between players. Unlike previous entries in the series, the title has missions known as “situations” and offers gamers an online mode to play if they grow tired of the situations. The game also features a technological breakthrough that redefines the way players interact with a game environment. With leverage from Ubisoft Montreal’s proprietary Realblast engine, Rainbow Six Siege incorporates procedural destruction that is realistic and unscripted. The environment reacts authentically, distinctively and dynamically, based on variables like the caliber of bullets or the amount of explosives used.

While the game looks great visually , and is one of the first Tom Clancy games on next generation consoles, it would have earned a higher spot on the list if not for the lack of a single player campaign, along with mediocre at best “situations.” This game is by no means terrible, but it just reminds us, and makes us wish that Ubisoft had not canceled Tom Clancy’s Rainbow Six Patriots. 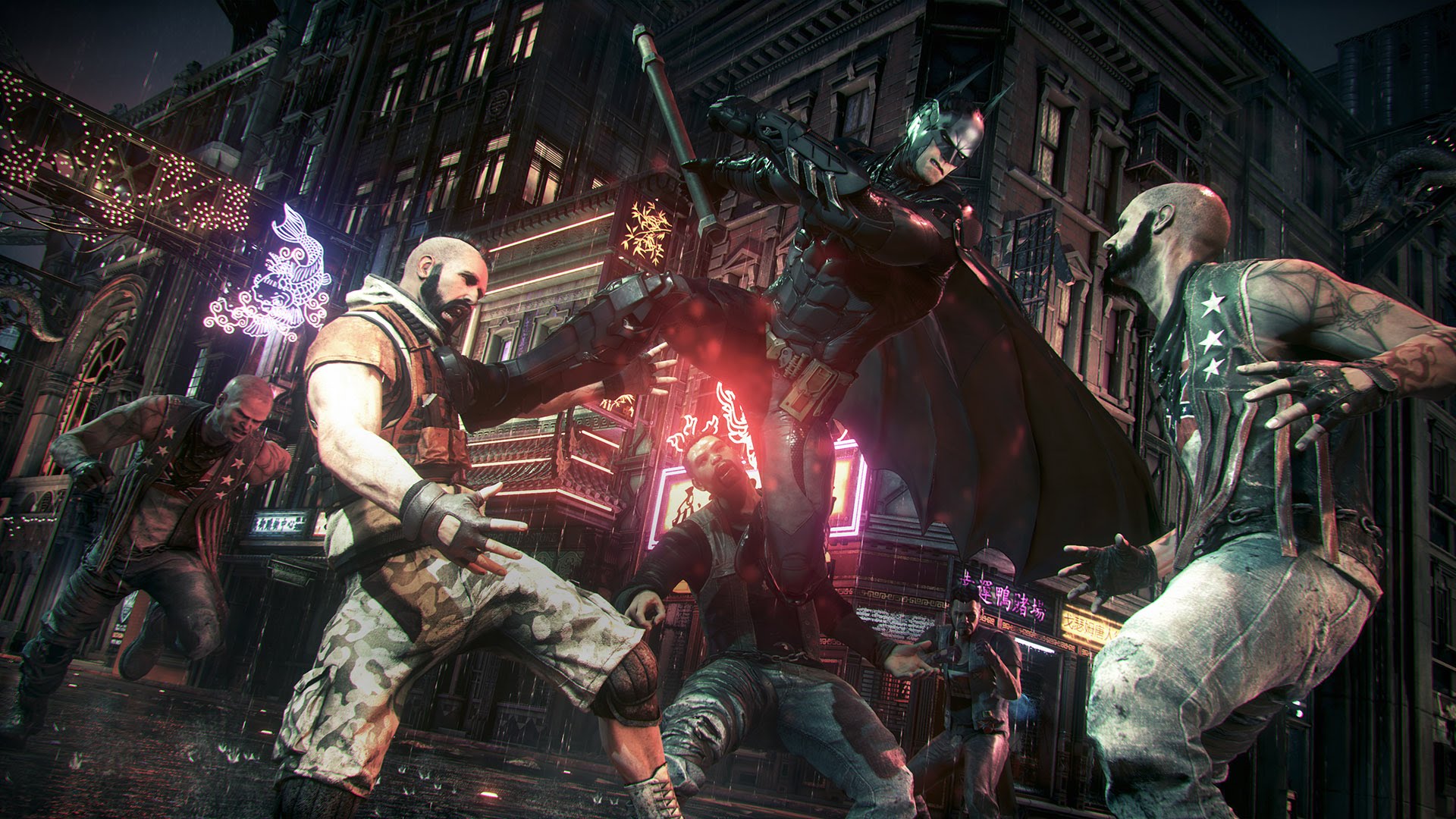 The successor to the 2013 installment Batman: Arkham Origins; Arkham Knight has a primary focus on Batman’s melee combat, stealth abilities, detective skills, and gadgets. Arkham Knight also introduces the Batmobile as a playable vehicle, which is used for transportation and combat. The game expands Batman’s arsenal of gadgets and combat attacks and offers a more open world structure, allowing the player to complete side missions away from the primary story line. This game could have been one of the best selling games last year if it wasn’t for the fact that, although the console version of the game received positive feedback, the PC version was, and is to this day, a broken mess of a game which destroyed the potential for more sales. 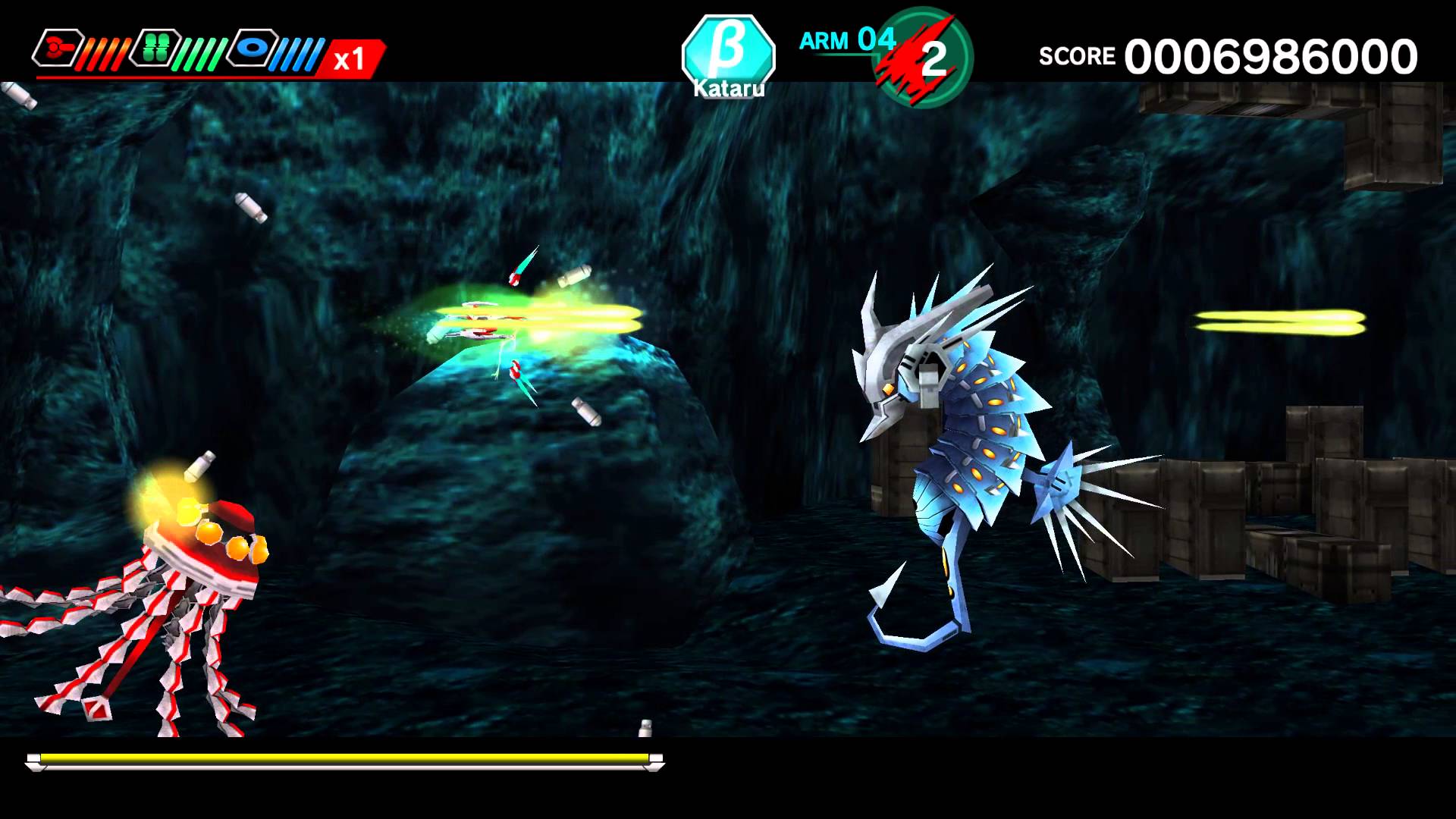 A side-scrolling shooter, an enhanced remake of Dariusburst, Chronicle Savoirs is an offbeat, sci-fi scroller that mixes aquatic and outer space setting, with sea creature robots adversaries. A traditional side-scroll shooter with a well executed blend of branching paths over linear paths; this game certainly gives you a bang for your buck. That doesn’t even scratch the surface of what this game has to offer, as this game also features cross sharing between the PS4 and PS Vita versions, allowing you to share your stats on national leaderboards between the two. 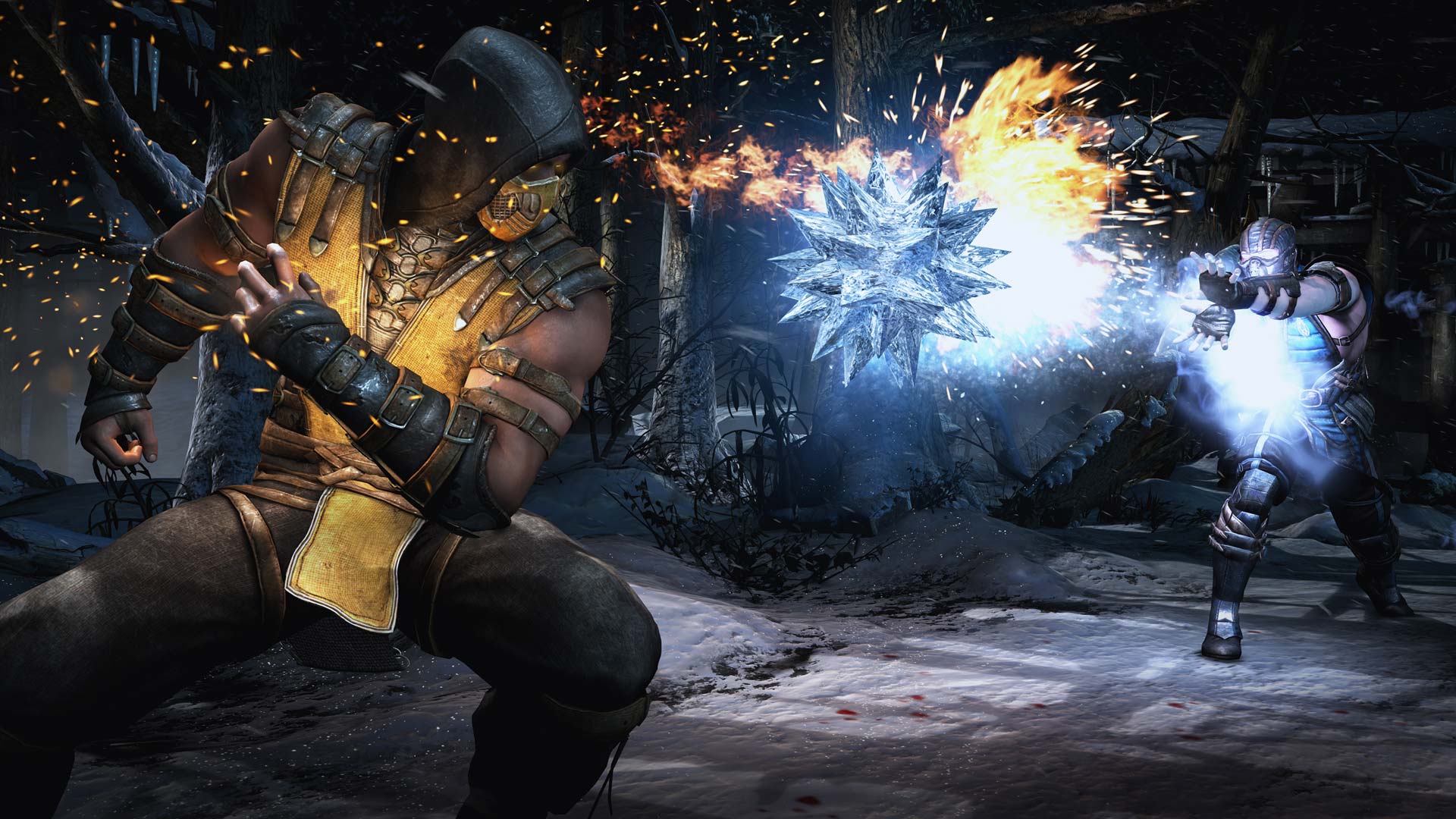 The first Mortal Kombat game released on eighth generation consoles, Mortal Kombat X; is the second installment in the Rebooted Mortal Kombat franchise, and a sequel to the 2011 fighting game, Mortal Kombat. The game contains several modes, such as a story mode; which takes place twenty years after the previous Mortal Kombat, several ‘Tower’ modes; which feature dynamically changing challenges, numerous online modes, and the ‘Krypt’; a mode played in a first-person perspective where players explore the areas, unlocking a variety of in-game items. This, like Arkham Knight would also be higher on the list if the developers put more consideration into PC gamers. It doesn’t help the fact that PC owners won’t be able to obtain any of the juicy DLC content as it has been restricted to console owners.

6. Rise of the Tomb Raider

Another second installment in a rebooted franchise, the game’s story line follows Lara Croft as she ventures into Siberia in search of the legendary city of Kitezh, all whilst battling a paramilitary organization that intends on beating her to the city’s promise of immortality. Presented from a third-person perspective; the game primarily focuses on survival and combat, while the player may also explore its landscape and various optional tombs. Since its release, the makers have offered lots of new content including a new campaign, new game mode, as well as new weapons, and clothes for our favorite archaeologist. 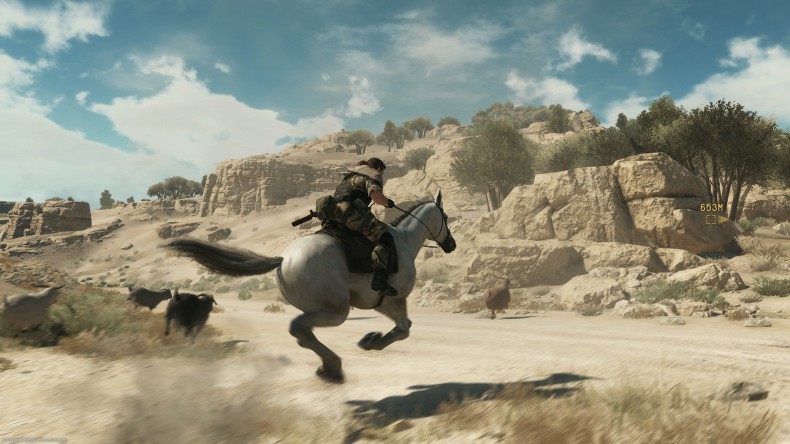 With Kojima gone, and Konami still having the rights to the Metal Gear intellectual property, I think it’s safe to say that Metal Gear Solid will not be the same moving forward. The Phantom Pain meanwhile took a big leap in open world gaming, along with The Witcher 3. Metal Gear Solid V offers less loading screens, insanely realistic graphics, and creativity for how players want to tackle their own missions; without punishing gamers for their stealth. This will go down as one of the greatest games in the franchise and a solid farewell for Kojima to both Metal Gear and Konami. While Konami has stated they plan to keep the franchise alive, without the creator overseeing everything it’s pretty questionable how successful that will be. 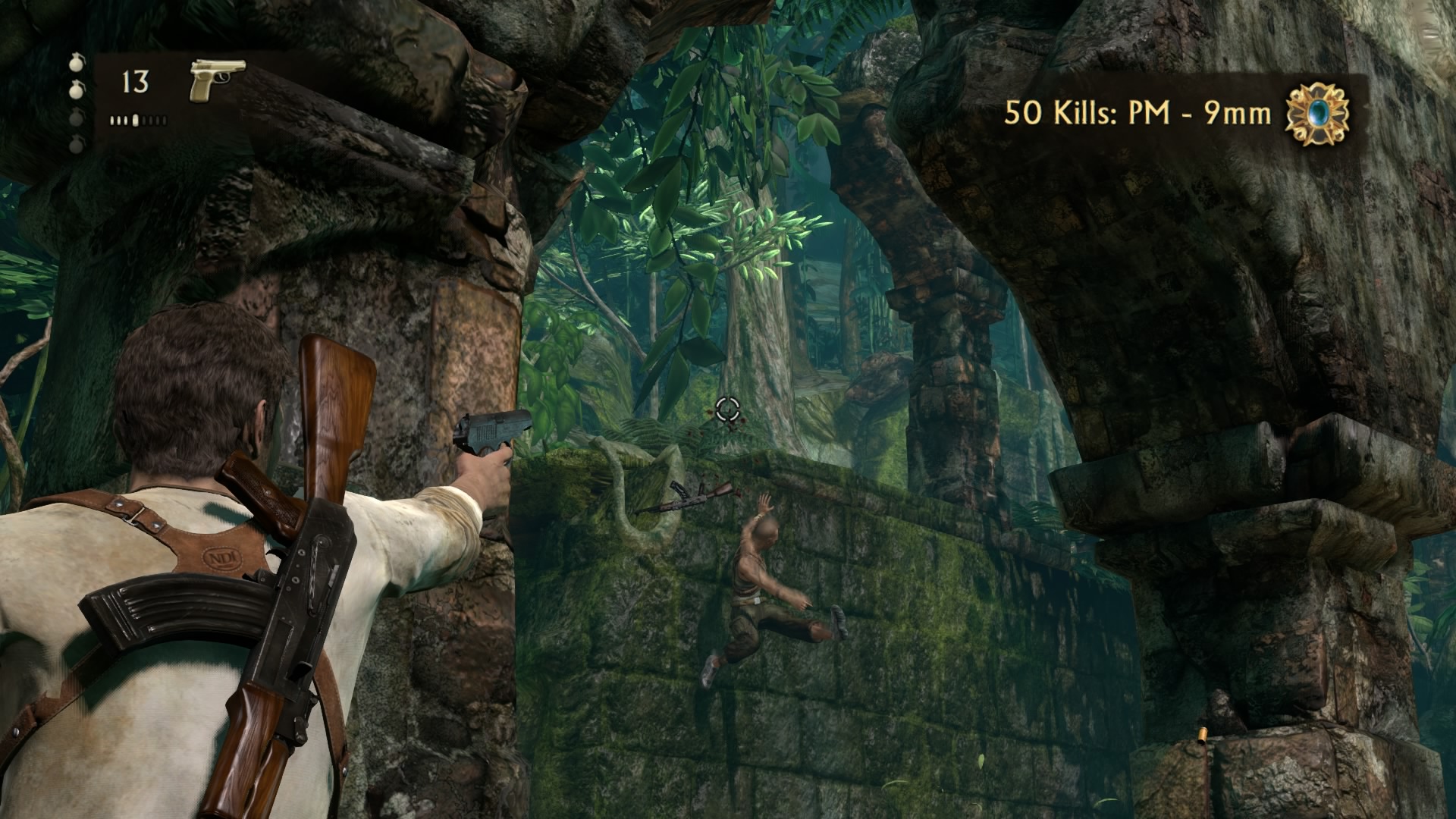 When Uncharted IV: A Thief’s End was delayed from March to an April release, many gamers voiced their anger with the announcement. To keep your minds busy for the next few months, they’ve offered a package to catch up on Nathan Drake’s previous adventures. The Nathan Drake Collection offers all three main titles (Drake’s Fortune, Among Thieves, and Drake’s Deception) from Naughty Dog’s third-person, action adventure, game. A modern day Indiana Jones treasure hunter, Nathan Drake’s last three adventures have received an upgrade making this one of the best looking games release on the PS4 last year. If you complete all three of Drake’s adventures, then take some time to play the multiplayer beta for A Thief’s End which is offered in every copy of the game! 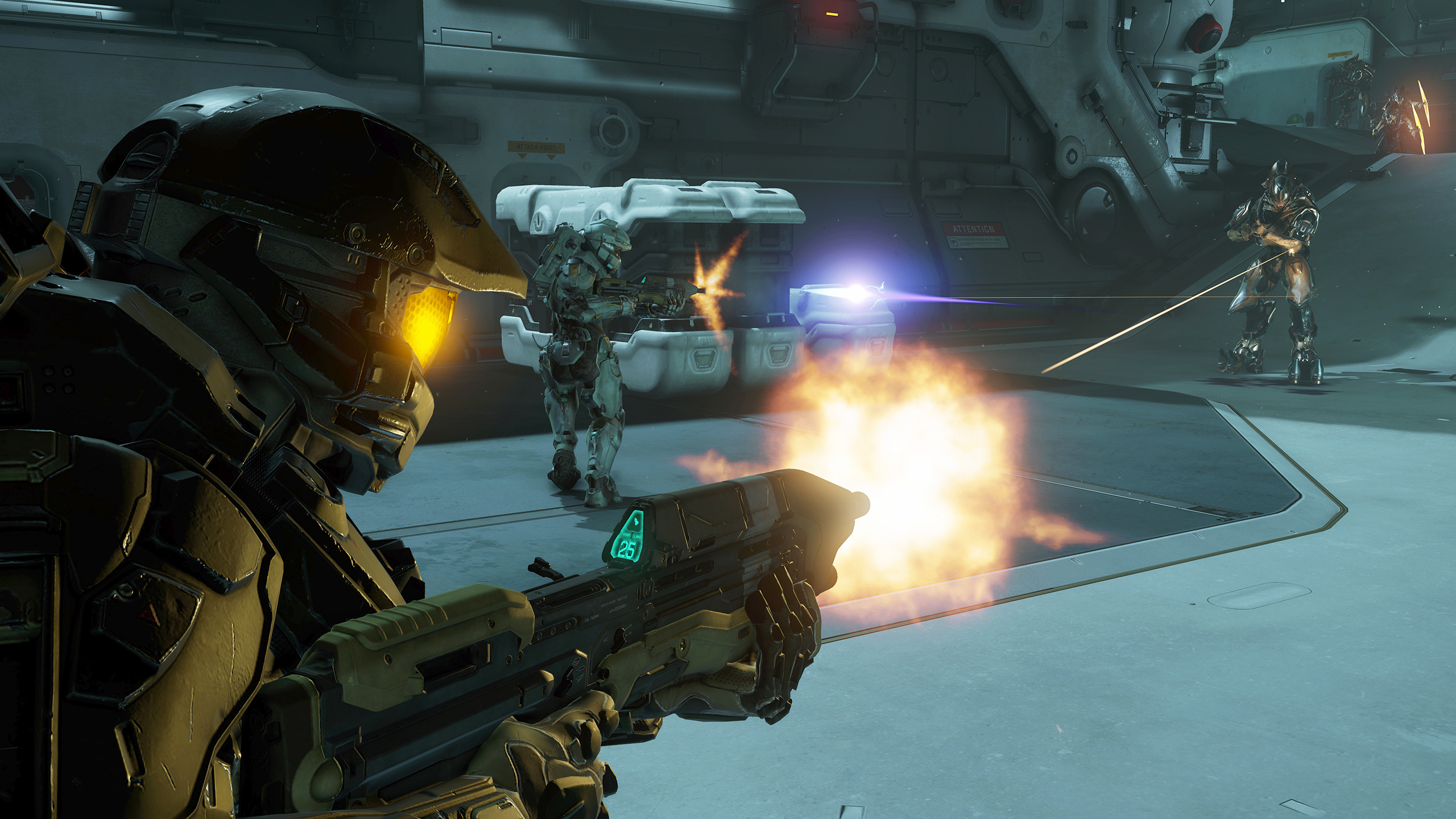 While 343 Industries certainly manipulated gamers into believing there would be this epic fight between Master Chief and Spartan Locke, as well as the game having you play as Locke more than the main protagonist and face of Halo you cannot deny that Halo 5: Guardians is a fun and addicting game. With new redesigns of both the Warthog and classic Halo weapons, as well as a new game mode Warzone, Halo 5 is certainly one of the best Xbox One games as well as one of the best games released in 2015. 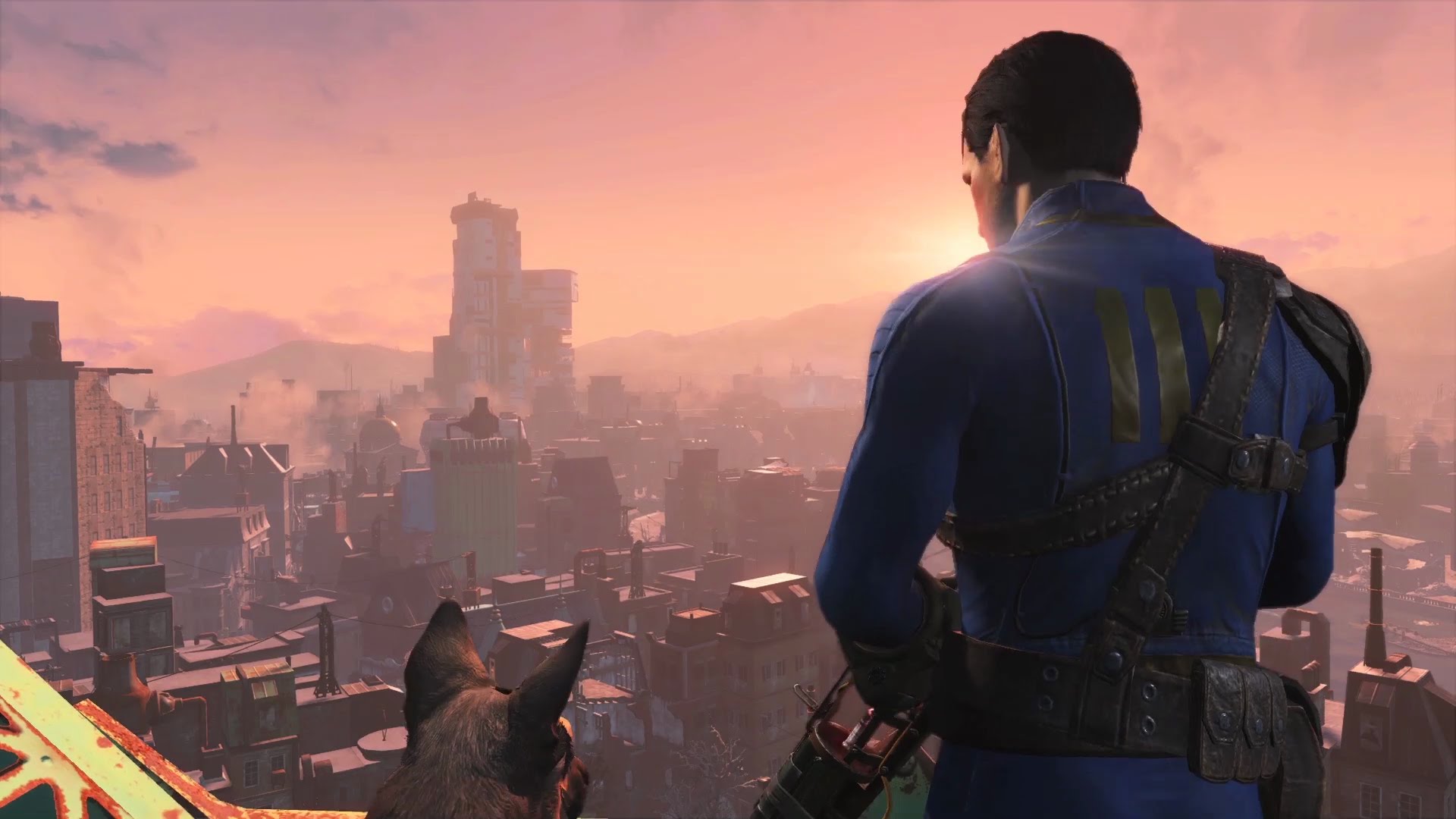 While this wasteland looks awfully familiar, Fallout 4 is one of Bethesda’s greatest masterpieces. Set 10 years after the events of Fallout 3, this game focuses on the main protagonist set 210 years after a nuclear war has destroyed the Commonwealth of Massachusetts. The sole survivor of Vault 111 (male or female) sets out to search for his/her son, while also constructing settlements, and aligning yourself with one of four factions spread out in the Commonwealth. While the game had a few major glitches, and some ugly character designs, as well as a questionable choice on the game engine; Bethesda was sure to add a lot of in-game content to offer before the DLC. And will have you investing countless hours on the game with high replay value. 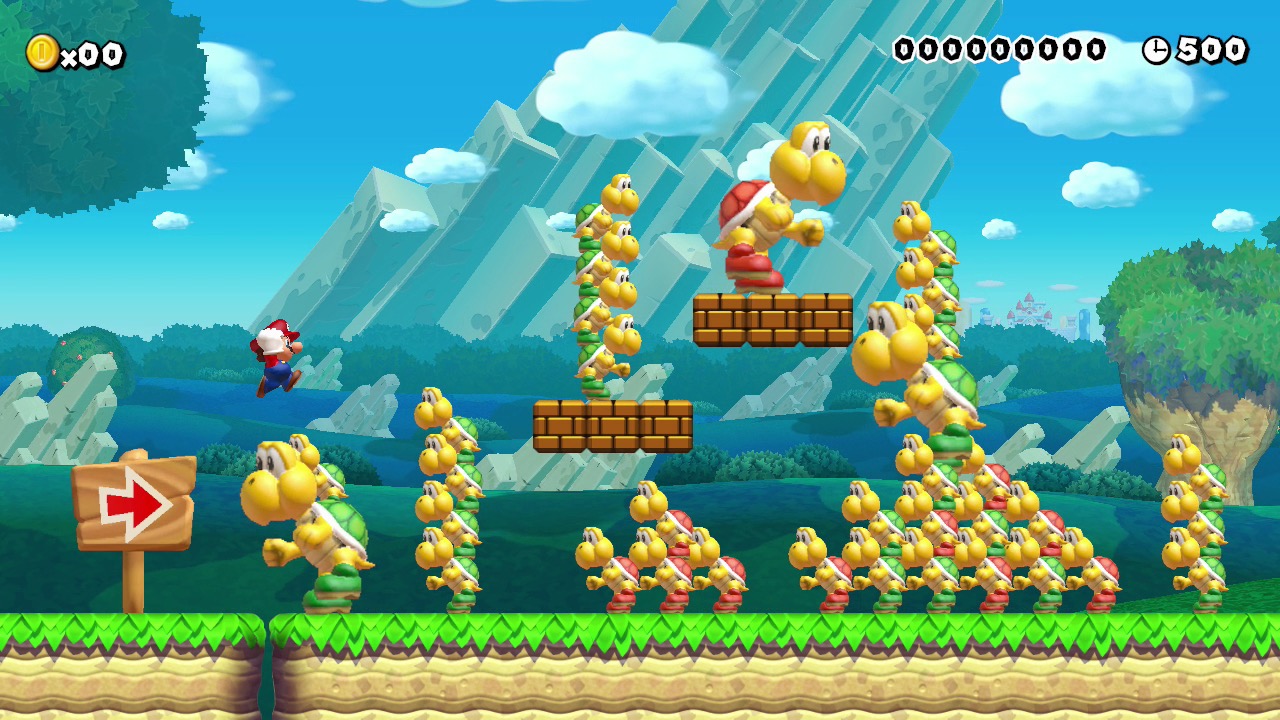 Who doesn’t love Mario? He is one of the most iconic video game characters since his debut in the 80s, a household name! He is one of the first characters you think about when someone says “Nintendo!” Super Mario Maker is one of the most innovative games that came out last year and may prove to be one of Wii U’s money makers for the home system. Allowing players to build and share their levels with people all over the world along with playing levels around the world, Super Mario Maker is one of those games that will make you play countless hours.  And will likely have you playing for many years to come! Especially in the era of companies just copying and pasting previous installments in their Triple A franchises because they are too lazy give the community something fresh. Super Mario Maker definitely is the freshest most innovative game in 2015 and is one of those games that every Wii U owner must have!

The post Best Games of 2015 appeared first on AptGadget.com.