Numerous rumors about devices leak during the pre-unveil period, and some are legitimate and come to light, others are illegitimate or photoshopped, and others are legitimate but are decided against some time before their canned nature comes to light. The most exciting part about providing info on leaks and putting rumors to rest concerns the nature of the evidence: tangible pieces of evidence that are indisputable are prized far more than whispers of what one company may or may not do with its next flagship.

The Galaxy S7 is a highly anticipated device, with rumors flying everywhere, but the evidence is starting to pile up. We’ve seen a spec sheet leaked by a Samsung employee, which tells us we can expect a snappy Qualcomm Snapdragon 820 processor to keep the experience strong, the usual, top-notch Super AMOLED display, and the stellar 12MP back camera with an f/1.7 aperture that we know will prove to be the best-in-class. Now, we’ve got more evidence to present about the Galaxy S7: its waterproof rumor is now validated. Yes, the Galaxy S7 will be waterproof, if the following components in an import listing is sufficient. 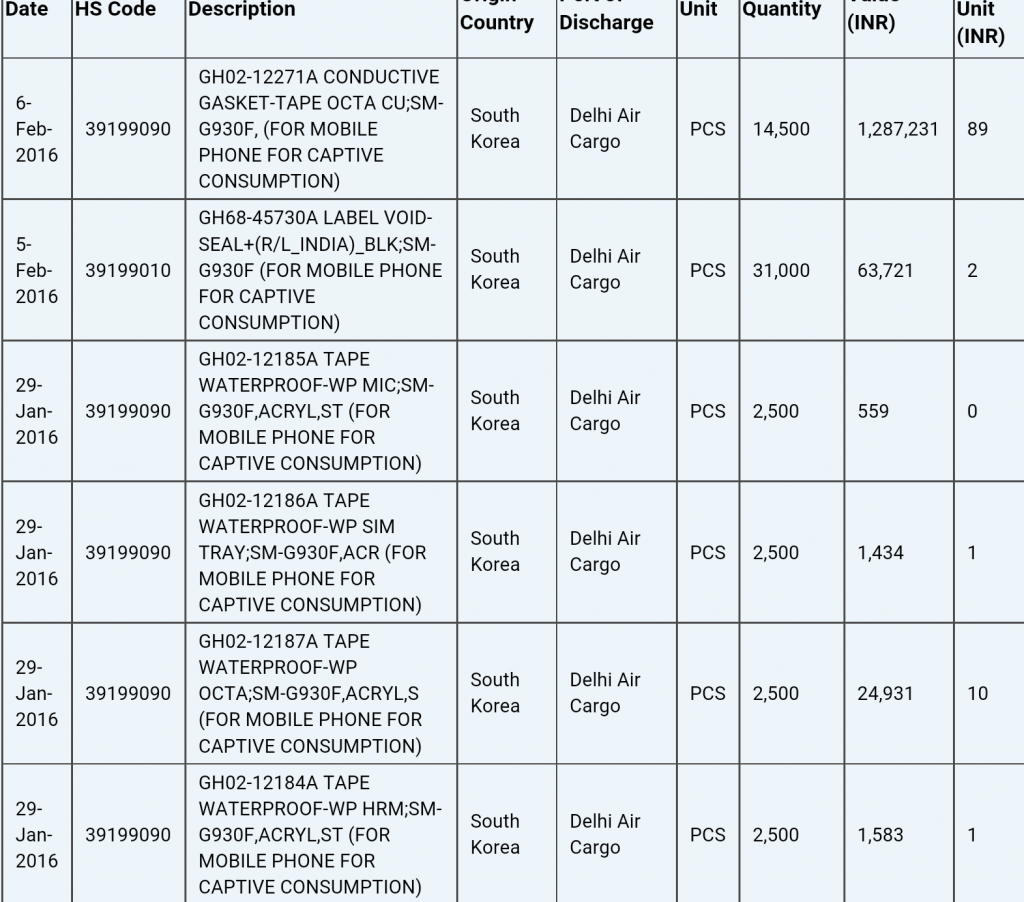 This tells us that the Galaxy S7 will likely have something akin to an IP67 or IP68 water and dust resistance rating that will allow you to dip the Galaxy S7 in about 3.3 feet of water for up to 30 minutes. The word “waterproof” is an interesting label, though, and it seems that Samsung would use IP68 water and dust resistance for its devices, though IP67 should prove sufficient for most situations (after all, the “6” in “IP67” and “IP68” points to full dust resistance, and the “7” and “8” in water resistant ratings points to just how much water can infiltrate the device without water damage.

There isn’t much else to read out of the Zauba shipping list, but it is reassuring to see something tangible that we can point to with regard to the Galaxy S7. Leaks are numerous before the unveil time, but we often see photos leak that pretty much look the same as last year’s device — which don’t tell us much. Hardware is one thing, but if we can see something that refutes the doubt we may have, it goes a long way toward solidifying the decision to purchase or pass in the minds of consumers.

With the Galaxy S7, Samsung seems to be returning to its roots, the same roots that made the Galaxy S4 Active and the Galaxy S5 so fantastic. As we’ve said time and time again, the Galaxy S7 is expected to feature a 5.1-inch, Quad HD display with a 2,560 x 1,400p resolution, a quad-core Snapdragon 820 processor, 4GB of LPDDR4 RAM, 32GB of storage with a microSD card for expandable storage, and running Android 6.0.1 Marshmallow — which brings with it native SD card storage for Android smartphones. This means that you’ll be able to use your expandable storage for internal storage within Android — so take that 32GB of native storage and add 64GB or 128GB of additional storage to it without worry. Samsung’s BRITECELL camera will make an appearance in the Galaxy S7 for the first time, making low-light photos better than ever and pitting the Galaxy S7 as the frontrunner in the never-ending contest with the iPhone 7 for smartphone photography dominance.