With the recent terrorist attacks and other gun-related events the debate is hot over whether people should be given free access to Firearms so as to protect themselves or whether the government should make the gun control regulations even harsher in an effort to prevent the killing.

Are there Differences between Real an…
Urban, Suburban, or Rural Practice: P…
Secrets of the Sorcerer Slot Review (…
How To Make Dandelion Jelly
Dead Ends in Cryptanalysis #2: Timing…

This particular debate is by no account new. However, times change and the discussion does take a new turn in the light of rapid development of 3D Printing technology.

Indeed, with the speed at which consumer grade 3D printers evolved and gained in popularity, it couldn’t be not long before people started getting an idea to 3D print a firearm. The idea spread fast with various individuals proposing, printing and even testing new and new designs.

Prominent among pro-gun 3D printing activists is Defense Distributed – a nonprofit, online, open-source organization designing firearms that may be downloaded from the web and printed with a 3D printer. According to their website, the US-based organization is organized and operated for literary and charitable purposes, specifically “to defend the civil liberty of popular access to arms as guaranteed by the United States Constitution and affirmed by the Supreme Court, through facilitating global access to, and the collaborative production of, information and knowledge related to the 3D printing of arms; and to publish and distribute… such information and knowledge in promotion of the public interest”. The organization describes its motivations as less about guns than about democratizing manufacturing technology and materializing the freedom guaranteed by the constitution.

In the US anyone can legally buy all the components of AR-15 rifle but one: the Lower receiver. 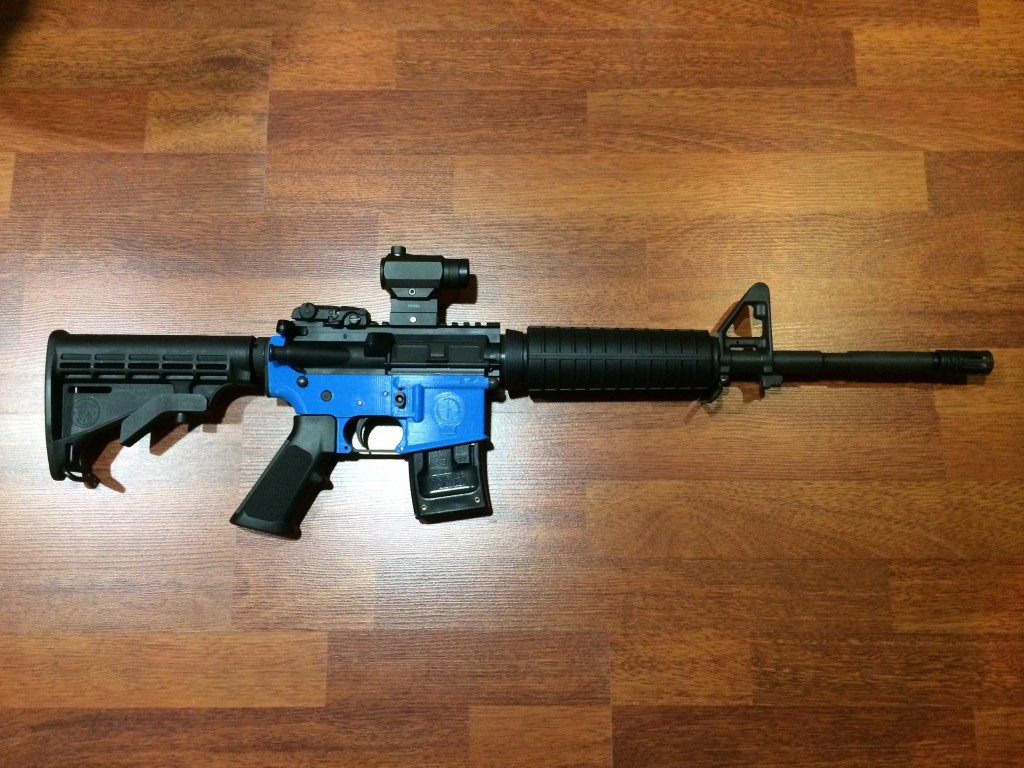 The founder of and the spokesperson for Defense Distributed, Cody Wilson, announced that he was working on a design of the world’s first fully 3D printable gun that would need no additional details, and on May 5, 2013 they made public the STL files (3D printable computer model files) for the Liberator .380 single shot pistol. 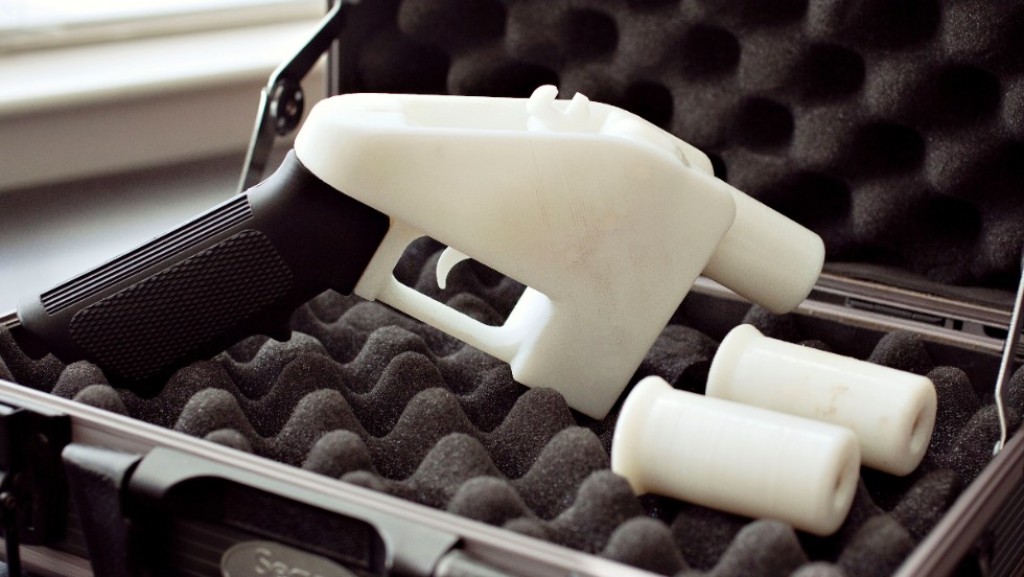 Despite the fact that one needs a license to buy, transport and possess a lower receiver, under the Gun Control Act of 1968 it is completely legal for every individual (except felons) to build a weapon himself for his personal use. It follows that if you buy all the parts for an AR-15, download the STL lower receiver file, print your own lower receiver, and assemble a fully functioning AR-15 semiautomatic rifle, you have your own unregistered legal firearm. What you can’t do is sell it or hand it to someone else – that would count as distribution, which is illegal without a special license.

Moreover, in the U.S. there is a practice of selling so-called 80%  lowers, which are Lower Receivers that require some additional milling and assembly before they are functional. Although designed for use as lower receivers, 80% lowers can’t function as lower receivers, and thus aren’t qualified as such and can be legally sold and bought without any license. After procuring such a semi-fabricated part, the buyer can finish it using a regular milling machine and then assemble a fully-functional firearm using other details that can be freely bought, thus, in effect, having created a weapon of his own, which is not prohibited provided that it is for personal use only. 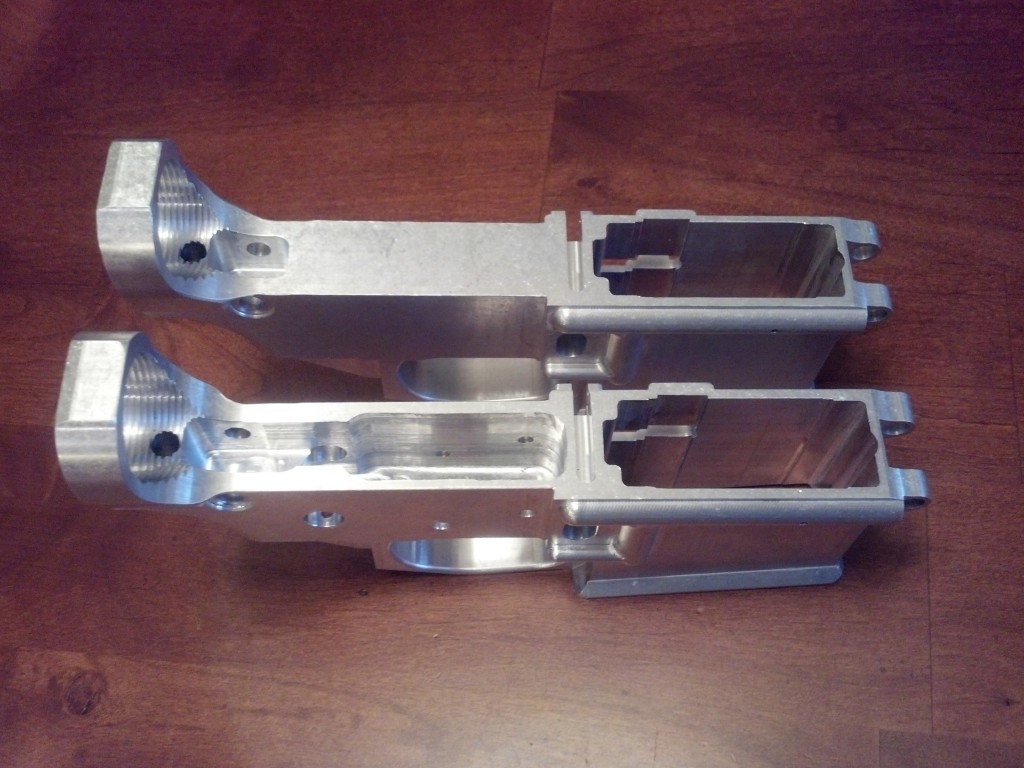 An 80% lower receiver next to a finished one

Taking this into account, it is not surprising that ATF did not immediately crack down on Defense Distributed. The official reaction was mild. The answers that various representatives of ATF gave were chiefly along the lines of “the technology of firearms 3D printing is already knocking on our doors, but it’s not yet developed enough to change the existing regulations.”

“We are aware of all the 3D printing of firearms and have been tracking it for quite a while,” Earl Woodham, spokesperson for the ATF field office in Charlotte, said. “Our firearms technology people have looked at it, and we have not yet seen a consistently reliable firearm made with 3D printing.”

When Adam Clark Estes, senior writer at Gizmodo, called the ATF’s Washington headquarters to ask what does it take for a gun to be “consistently reliable”, program manager George Semonick said that the gun should be “made to last years or generations”.

Today on the ATF site in the Q&A section devoted to 3D printing firearms one could (at the time of publication of this article) find:

Here  you can find some other questions and answers regarding legality of building a firearm using a 80% lower in the U.S.

One of the restrictions mentioned above deals with undetectable firearms. Under the Undetectable Firearms Act, manufacturing of any firearm that cannot be detected with a metal detector is illegal, so legal designs for Liberator and other 3D printable firearms require a metal plate inserted into the plastic.

Although causing lots of debates and controversy, Defense Distributed keeps within the boundaries set by the U.S. firearms regulations. The organization is not a weapons manufacturer. It operates to publish information developed by licensed weapons manufacturers and the public. Cody Wilson, however, has Type 7 Federal Firearms License (FFL).

3D printing lower receivers is all very cool and interesting to play around and experiment, but when it comes to durability and reliability, metal is the obvious choice. And when one can buy a 80% lower and bring it to completion with a drill mill, what’s the point of buying an expensive 3D printer to print a not-so-reliable plastic part? After all, if your gun means a sense of security to you, you certainly don’t want it to fail you should it be needed. And so, in addition to their 3D printing activity, in October 2014 Defense Distributed started selling Ghost Gunners -miniature CNC machines designed for the purpose of automation of the process of bringing semi-manufactured lower receivers to completion.

For a review in Wired in June 2015, Andry Greenberg manufactured three lower receivers. He compared different strategies: he tried milling an 80% lower to completion by himself, 3D printing one from plastic and using a Ghost Gunner, concluding that the machine is absolutely easy to use and does a much better job than he could possibly hope to do with a drill mill. On his way back to New York he decided not to bring his lower receivers on a plane, so he surrendered them to the local police office as a way of disposing of them. Here’s the video:

The temperature is high and the opinions are highly polarized around the gun control debate. Should people have access to firearms or not? Meanwhile, as the technology progresses, in becomes increasingly easy for a regular citizen to create a gun of his own, and so the old gun control laws in U.S. don’t have quite the same effect as they had before, when few people possessed the skill and the instruments needed to manufacture a gun on their own.

When confronted regarding the issue of 3D printing weapons, an AFT official said:

“The difference is knowing your life depends on a gun — when someone breaks into your house — which one do you grab? The one that you 3D-printed or the one you bought from the manufacturer?”

Although it is true that 3D printed weapons are not as reliable as the metal ones, it doesn’t cancel the fact that they are just as deadly. And while in the U.S. gun control regulations are loose enough so that everyone except convicted felons have a right to manufacture their own firearms, in most other countries governments exercises a much harsher gun control policy, which makes the problem of 3D printed firearms much more acute.

I hope you’ve enjoyed reading this post. If you have any questions, suggestions or comments, let me know in the comments section.