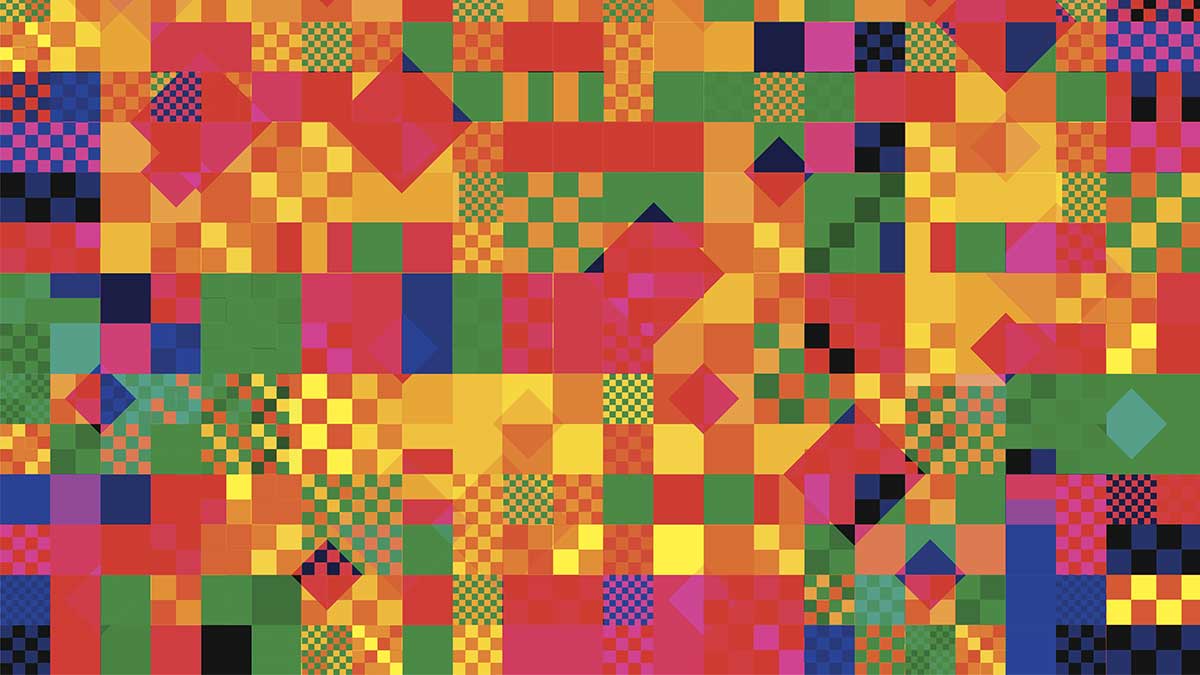 On October 12, 2016, President Obama’s Executive Office published two reports that laid out its plans for the future of artificial intelligence (AI). The reports received less media attention than they might have otherwise because the United States was gripped by the final weeks of a presidential campaign race. But depending on one’s view of AI’s potential impact, the work described by these reports may be more influential on the long arc of history than the outcome of that election. Combined, the two reports include eighty-eight pages and twenty-five recommendations. Here are the highlights.

CBD 2020: What to Expect + Our Top Pr…
Traffic Wardens reject new uniform ba…
Why Friday The 13th Will Be Your Luck…
The 10 Leading Blockchain Companies o…

The U.S. government is not designing policy for general intelligence or “strong AI.” The reports define artificial general intelligence (AGI) as “a notional future AI system that exhibits apparently intelligent behavior at least as advanced as a person across the full range of cognitive tasks.” But this isn’t the sort of AI that the administration is planning for. The administration takes the position that current policy should not be influenced by aspirations to achieve AGI, for three reasons: 1) many experts believe that AGI is not feasible in the short or medium run; 2) the authors assume the best way to prepare for AGI is to “attack risks” from narrow AI, such as security, privacy, and safety; and 3) the policy recommendations for AGI are unknown and may conflict with those for narrow AI, which is more certain and with immediate economic implications. This approach stands in stark contrast to the views advanced by organizations that focus specifically on AGI such as the Future of Life Institute at MIT, the Future of Humanity Institute at the University of Oxford, and the Machine Intelligence Research Institute at the University of California at Berkeley.

AI isn’t a science project; it’s commercially important. The Obama administration recognizes the tremendous economic potential of AI, which is why the NSCT subcommittee on the topic included representatives not just from defense and intelligence, but also the Departments of Commerce, Treasury, Trnasportation, Energy, Labor, and more. In a separate report, the Chair of President Obama’s Council of Economic Advisers, Jason Furman, wrote: “The biggest worry I have about AI is that we will not have enough of it, and that we need to do more…” Echoing this point, President Obama subsequently remarked: “The analogy that we still use when it comes to a great technology achievement, even 50 years later, is a moonshot. And somebody reminded me that the space program was half a percent of GDP. That doesn’t sound like a lot, but in today’s dollars that would be $80 billion that we would be spending annually … on AI.”

The U.S. needs to expand its AI workforce. Expanding the AI R&D workforce is a key theme across both reports as well as Chair Furman’s paper. There are two ways to grow the workforce: 1) by training students at home, and 2) by importing talent from abroad.  The reports are silent on how much emphasis the government should place on each approach.  This depends partly on how long it takes to develop talent domestically. With an expanding set of resources for lowering the barrier to entry in the field (e.g., open-source software libraries for machine learning such as TensorFlow, Caffe, Theano, and MOOCS for learning machine learning online) some skills can be developed in short order.  However, developing the Ph.D. level expertise required to conduct research and make fundamental breakthroughs takes time.  This level of talent likely needs to be aggressively recruited to the U.S. in order to achieve the stated objectives with the urgency implied in the reports.

The U.S. government has no clear vision regarding where to focus research funding.

Regulation could threaten AI’s progress, or further it. The bottleneck to deploying AI-enabled, society-enhancing products and services is shifting from technology to regulation in domains like autonomous vehicles and unmanned aircraft systems.  The report notes: “where regulatory responses to the addition of AI threaten to increase the cost of compliance, or slow the development or adoption of beneficial innovations, policymakers should consider how those responses could be adjusted…” But regulation can help too, as the administration recognizes. Well-designed regulations will influence the rate and direction of innovation by creating incentives for the private sector to invest in ways that most benefit society.  For example, regulations regarding transparency — “Why is the AI recommending a treatment that is different from what the human doctor recommends? What is its reason?” — would create incentives for the private sector to invest in research to address these issues, which in turn will make AI more governable.

AI can help governments do their jobs better.  The government can use AI itself to serve the public faster, more effectively, and at lower cost. This includes mundane tasks such as faster bureaucratic processes (e.g., issuing driver’s licenses) as well as complex applications such as cybersecurity (lower cost, more agile) and weapon systems (safer, more humane). This will be an important area for competition across jurisdictions. Those who invest early may benefit not only from increased productivity but also from learning about how AI-enabled products and services work that may provide additional advantages in subsequent decision-making. Of course, early adopters also risk exposure to the costs of learning and of less-tested technologies.

China is a leader, not a follower or a copycat. Perhaps the most perplexing part of the report is the stark contrast between a dramatic illustration and the accompanying blasé text. Over the past four years, the U.S. and China grew their research output in AI significantly faster than other countries, with the U.S. initially emerging as the worldwide leader. However, over the last two years, China surpassed the U.S. by these measures of research output. 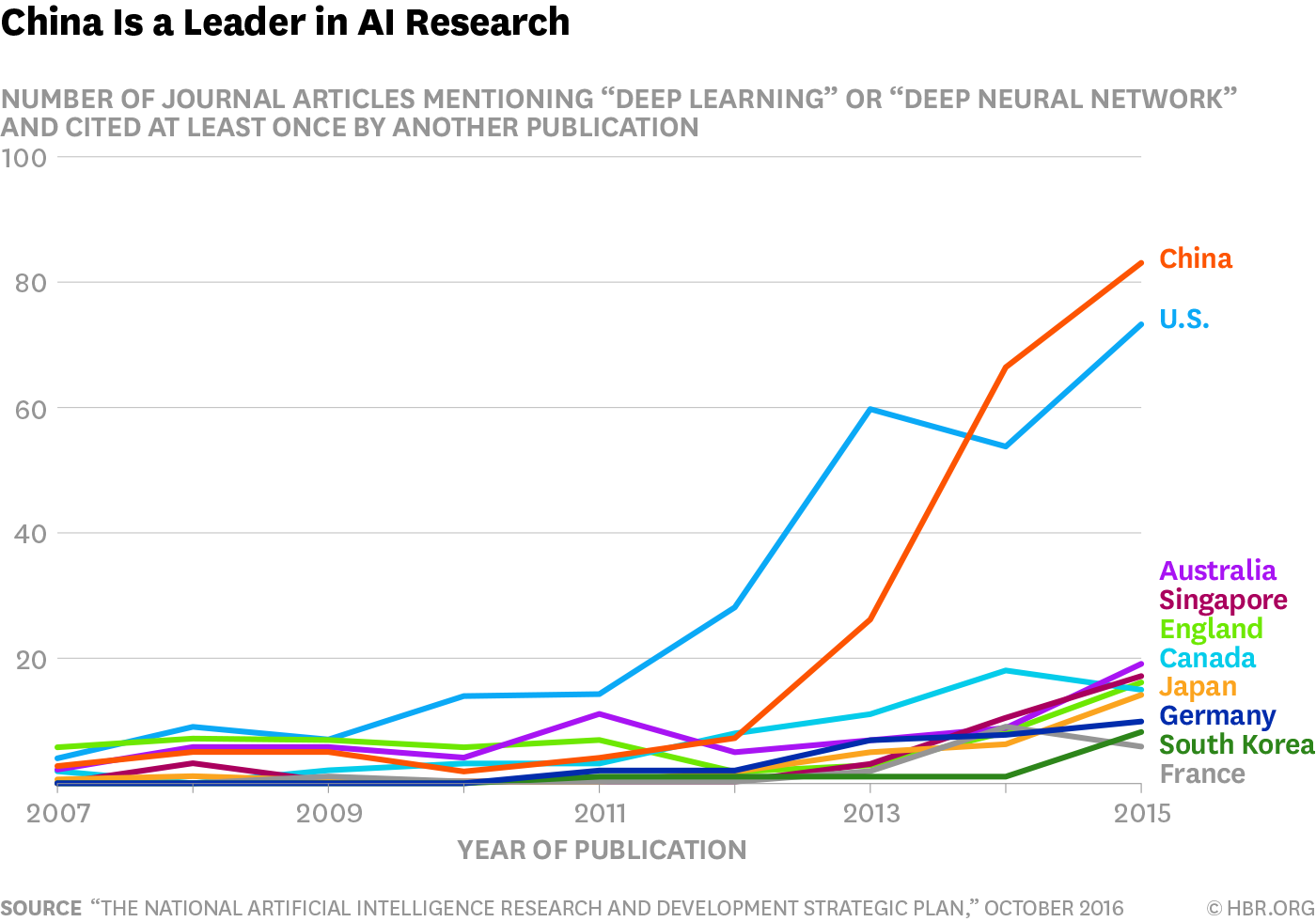 Given the importance of AI reflected in every other aspect of this report, it’s surprising that the rise of China and its implications for competition in research and human capital receives only one sentence in the text: “The trends also reveal the increasingly global nature of research, with the United States no longer leading the world in publication numbers, or even publications receiving at least one citation.”  That’s all the report says.  China is never explicitly mentioned even once in the text of either report.

Perhaps the authors of the report believe the data is not a good measure of meaningful research. Alternatively, perhaps the real policy response — an aggressive international recruiting campaign for top AI research talent — is not meant for public consumption. The founder of Chinese company Baidu, Robin Li, expressed his view on the importance of this technology for China: “when the age of AI arrives, the [internet of things] will become a big market and completely change manufacturing. I think that in the future all manufacturing will be a part of the AI industry… China is a manufacturing giant, and I think we need to really pay attention to AI tech development…” Every country with AI research expertise that wishes to participate as producers on the frontier of this technology should prepare for intensifying labor market competition, especially from the U.S. and China.