All about "Get Windows 10" app its problems and solutions

Tags: windows app
June 5th 2015
View original
Everyone should aware of the Windows 10 upgrade which will be rolled out from 29 July 2015 throughout the world. It is a free upgrade for the users who own legal license to either Windows 7,8 or 8.1. Microsoft announced that all the upgrades to the present Windows users will be rolled out by a Get Windows 10 app which is similar to Windows upgrade assistant and you don't need to download is manually instead it will be automatically downloaded with the Windows updates. 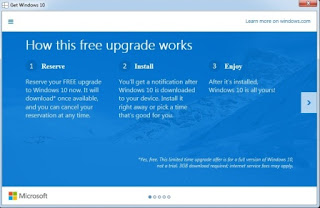 How to install and use Windows 10 app?

*. As far as getting the Get Windows 10 app (GWA) you need to update your Windows with the optional update KB3035583.

*. With this update the app is automatically downloaded on your computer. This puts a small Windows logo near your system tray on task bar. You can click on that icon to check your system's compatibility for Windows 10 and after the launch of Windows 10 you can upgrade your Windows with Windows 10. You will need a good internet connectivity because it will approximately 3GB.

*. After this you will see a small Windows icon on your task bar near system tray. This can be used to start the app and you can check your system's compatibility with the app and also use it for later Windows upgrade when it will launch officially.

*. You can also reserve your Windows 10 upgrade for getting the notification when it is launched. 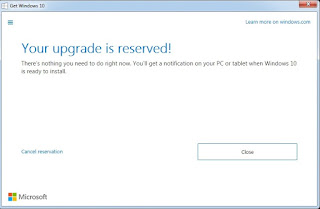 Problems and solutions for installing the Get Windows 10 app

*. If you don't see the icon of the app you need to check whether the update KB3035583 is downloaded and installed on your computer.

*. Check this from Windows update history. If you don't see the update you need to check for updates for the update to download and install.

*. Another way to check this update is from Command Prompt (cmd). Open cmd and type

*. Open Notepad and copy and paste the following script

*. Save this script as ReserveWin10.cmd in any directory like C drive.

*. Run the saved file as administrator and wait for the operation to complete. It may take 10 to 15 minutes to complete so be patient.

I hope you enjoyed this article and also hopeful that you will sort out the issues with windows 10 app. If you have any queries you can comment it below.

All about "Get Windows 10" app its problems and solutions

Subscribe to Techantic - Tips And Tricks About Windows, Android