How to Stay Organized in Project Management with Task Dependencies

Project management is all about managing tasks and making sure that they are Completed promptly. The key to successful project management is the use of Dependencies in a project plan. Dependencies can be described as "A task needs another task to complete before it can start." They help you stay organized by ensuring that everything has an order, including your team members' work schedules.

1. Constraints: A constraint in task Dependency is a limitation that prevents two or more tasks from being executed simultaneously. This can be caused by many factors, including lack of resources, conflicting priorities, etc. From an organizational standpoint, constraints in task dependencies are viewed as an opportunity to improve workflow for tasks with specific deadlines and goals that need to be met.

2. Critical Path: Critical path in task dependency is a process that identifies which tasks must be completed before other tasks can start and the order in which those tasks should be performed. The goal of implementing critical path analysis is to identify delays and bottlenecks as early as possible to resolve them quickly.

3. Lag: Task dependency is a significant factor in determining how long it takes to complete a project. If one task can't be completed until another has been completed, then the tasks are dependent on each other, and their completion time will be longer than if they were independent of each other. This means that there is some "lag" between them, and the project will take longer to finish because of this.

4. Lead: Lead-in tasks are the tasks that happen before another task. They set up all the prerequisites for a task to be successful. If you don't complete your lead-in tasks, then your other tasks may not be successful either.

Types of dependencies based on conditions: 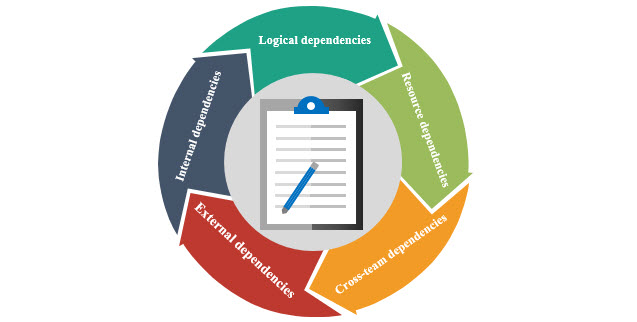 1. Logical dependencies: Are the relationships between tasks on a project. They describe which tasks must be completed before other ones can start or continue. There are three types of logical dependency: positive, negative, and neutral. A positive reliance is when task "A" cannot start until task "B" has been completed; a harmful dependency is when task "C" cannot finish until task "D" has been created, and a neutral dependence does not affect the starting time of either of the two tasks.

2. Resource dependencies: Are a type of task dependency that is unique to project management. These dependencies represent the relationship between two or more tasks, where one task cannot start until another has been completed. The completion of one task triggers the next; once they are all finished, you can say that there is no longer any dependency on any other tasks.

3. Cross-team dependencies: Exist when two or more teams need each other to complete their tasks, but it is not always clear which team should take ownership of these additional responsibilities.

4. External dependencies: Are things that affect the completion of one or more tasks but are not part of the same project. For example, they might include company holidays, vacations, client deadlines, and so on. The most important thing to remember about external dependencies is that they will always have an impact on your workflow - even if it's just for a day or two!

5. Internal dependencies: Happen when the task needs to complete successfully for another task to be completed. They can also occur if something has been done or not done before the task starts.

Types of dependencies based on task:

There are four types of dependencies:

Finish-to-Start (FS): FS is when one activity cannot start until another activity has been completed.

Start-to-Start (SS): SS is when two or more activities must be started simultaneously.

Finish-to-Finish (FF): FF is when one dependency follows another dependency, and there must be exactly one instance between them.

The Start-to-Finish (SF): Type is a variation where one or more tasks must be completed before starting any other dependent tasks. This can be used to produce an order in which execution should proceed when resources are scarce.

How to Manage Dependencies in Project Management?

Project management manages all the tasks in a project, including ensuring that deadlines are met, and costs are kept under control. One of the most important elements to manage when it comes to project management is dependencies.

Dependencies are links between tasks in which one task cannot start until another has been completed. For example, if Task A needs data from Task B before it can be created, then Task A is dependent on Task B. Managing dependencies will ensure your projects run smoothly and efficiently.

Manage your dependencies by following these steps:

1) Create a dependency map of all tasks in your project. This will help you identify which charges are dependent on other tasks and their timeframes.

2) Identify any missing pieces or information necessary to complete a task (e.g., who needs to approve it, what approvals are required, etc.).

3) When assigning team members to work on specific parts of the project, make sure they know what other parts need to be completed first, so they don't start working on something else before finishing the rest of the task list.

4) Make sure everyone is on the same page by communicating your project's progress and any changes as soon as they occur.

How to Stay Organized in Project Management with Task Dependencies