Music Player...there is just Google Play Music, which is so so. However, I went to Google Playstore and purchased the FREE Music Player called Music Folder Player ....this is my favorite player of all time because it allows me to play music by Folders....so easy to use.

A New Way to Service Your Trading: Av…
How To Stay Focused And Motivated In …
The Ultimate Winter Bucket List Accor…
Where To Stay In Barcelona 2020 [The …
Promote the Common Good
Front Camera for RCA Voyager II Tablet only. This will allow you to use Skype or other Video calling. There is no rear camera lens...no taking regular pictures, this is disappointing.
Bluetooth...works wonderfully. It paired with my Bluetooth speaker quickl and my phone quickly and easily paired. The built in tablet speakers work so so but not that loud but on my Bluetooth speaker, loud and clear.
WiFi Phone calling...there is no regular phone in this tablet. However, I installed Google Hangouts (WiFi calling). It works as I have a Hangout phone number so I called a friend and we talked while I was on this tablet...WiFi must be working and turned on for this.
RCA Voyager II Tablet is OK for space IF you do not install lots of games in it.
Peppiness and overall speed...coolness of tablet...Peppier than I expected, no lagging. Tablet runs super cool at max 85 degrees, this is excellent...never overheats.
Battery Life...3.75 Hours while I had WiFi on, Bluetooth On and was posting on Facebook, while this is not great, at 3.75 hours use, I still had 15 percent so I plugged in the charger.
Display/Screen Brightness...At 100 percent brightness, it is OK bright, plenty for me. However, I compared it to my Samsung Tab A 9.7 Tablet and Samsung tablet was brighter than this RCA tablet. I read a book on the Kindle Reading app and the brightness was great.
Internet Apps...I prefer the built in Internet, it is easy to use. Also, I use the Google app and it works great. There is also Google Chrome browser, this works great as well.
SD Card slot...so I installed a 32gb micro SanDisk SD card. I copied my music folders from my laptop, my videos and files and even with lots of music, I still have 6 gigs left to add more music later. I am not sure if this tablet will hold a 64 gb or larger card as I just had a 32 gig card to install. This tablet read my card perfectly and I played my music, found my files.

No regular camera...no camera lens on back, just front. But it does take selfies and video chatting.
There is a camera lens on front for selfies or video chatting such as Skype (2.1 mp).
- Advertized at 8gb...only about 3.75 left before I installed my apps from Playstore. But even after Facebook, Twitter, Google Hangouts, Kindle app and 21 more apps, I still have over 2gb to install more apps later on.
Should you consider this tablet? Yes, IF you want a very basic tablet that you can use Facebook, Twitter, Internet, emails, listen to music, then YES. But you need a regular camera, as this tablet is for selfies and video chatting, it just has a front camera.. If you are big into games, then NO, then buy another, higher end tablet as a Samsung, ASUS etc.
Why did I buy this tablet? I keep it in my kitchen to listen to music, read Kindle recipe books, check Noaa weather, Radar Alive Pro, check my Gmail. This tablet at 36 dollars is PERFECT for me and it stays on top of my kitchen counter, I love it when I am cooking.
When I relax in bed, I use my very much loved Samsung Tab A 9.7 tablet.
photos for RCA Voyager II Tablet 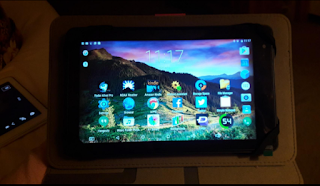 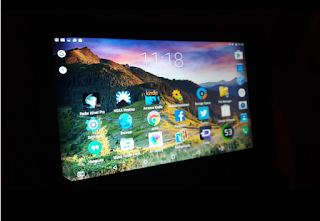 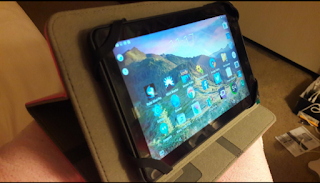