Thoughts on the Apple iWatch and Google smart watch market 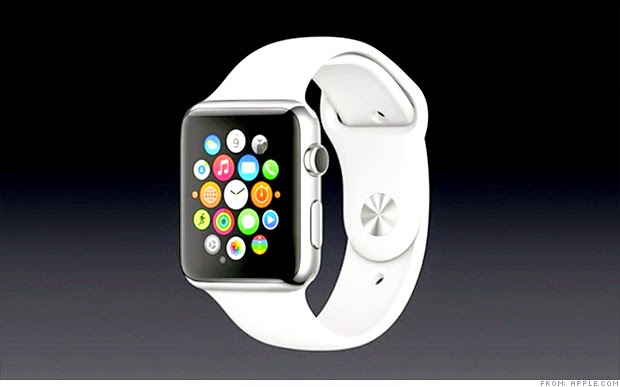 For those of you who don't live in caves on mars, Apple unveiled the iWatch this week. Their first entry into the smart watch market kicked off by Google earlier this year.


This isn't a new thing for Apple to do. They're often late to the party with technology but they seem to have this gift for hyping it up and using it in a seemingly reinvented way that only Apple can do. Seriously, if you want to play a drinking game, watch Apple Live events and take a shot every time Tim Cook says "only Apple" to describe new products.

So what's new about the iWatch?

Not much as far as I can tell. It's an Apple interpretation of the Google smart watches we saw earlier this year. The differences are the same proprietary things you notice between iPhones and Android phones. There's nothing about it that made me think I want a smart watch now, anymore than it did when Google unveiled theirs.

Not really that surprising in the smart watch market

I think this is the problem I'm having with it. Apple usually takes a product/genre and transforms it with something full of design firsts or unique qualities. I didn't get that feeling with the iWatch. It felt like the only unique quality is that it runs on Apples proprietary software. What disappointed me with the design is that it looks like Apple joined its competition rather than distinguished itself as a product its own league. Look at it alongside the rivals below:


The Apple Watch looks better and more imaginative in its UI but...


Does the product at the bottom of the list not stand out the most? Not because of the gif but the fact that it does something that all 3 above aren't doing. Trying to be a watch?


Trying to be a watch, a unique concept in a smart watch market

Looking at the first 3 designs they're all competing for the same space. They're all trying to reinvent the watch by creating a 2014 interpretation of the future watch concept we saw the likes of Casio create in the 1980s. The same square form factors and outlandish futuristic designs.

While by contrast, the Moto 360 hides the fact it is a smart watch and is the only one with a round clock face. It's unique.

Being unique in the market place sells

Any of you who have read my previous blogs, my marketing recommendation to all my clients and readers is focus on your uniqueness. Usually this is Apple's forte but on this occasion it seems to me to be the Moto 360 and it shows in the way it continues to sell out.

This isn't to say doom and gloom for Apple. The Apple watch will be a resounding success, simply on the merit of it being an Apple product linked to the massively popular Apple software ecosystem. It will be the must have accessory to pair with iPhones when it releases in 2015.

It is a question of philosophy

It appears there are two approaches to smart watches forming. The ultra modern "look at me, I have a smart watch!" designs and then the Moto 360 "surprise! I'm actually a smart watch too" philosophy.

Personally I'm more of a fan of the latter because it solves some of the workflow issues we've been having with the smart watch concept. Is it a standalone product or a supplementary one that compliments your user experience with your phone or computer rather than a replacement for them.

It fits into the workflow by acting as a wrist based notification center you can quickly glance at and decide whether it is worth the more cumbersome (and antisocial) option of pulling out your phone or laptop. I don't want to replace my phone or laptop with it.

A watch that is smart rather than a smart watch

I predict that Apple will conquer the high tech looking market and Google will grow the modest Moto 360 watch market further. What I'm really curious to see, is how these smart watches affect the sales of conventional watches.

Could we see Google partnering with brands like Rolex to make stylish shells for their smart watches to take on the Apple iWatch?

Coronavirus: How to Stay Safe From Coronavirus in Nigeria

Thoughts on the Apple iWatch and Google smart watch market