Tags: easter resurrection christ
February 15th 2016
View original
Easter Sunday falls on Apr. 5 this year and the holiday celebrates the Resurrection of Christ three days after his death. Easter also marks the end of Lent, a time to reflect on the sacrifices Jesus Christ made while honoring his life, passing, burial and resurrection. The week prior to Easter Sunday is called Holy Week, which includes several other important Christian holidays, including: Maundy Thursday (honoring Jesus’ last supper with his disciples), Good Friday (the day of his crucifixion) and Holy Saturday (commemorates the time between the crucifixion and resurrection). Celebrate Easter with us with these inspirational quotes.

Easter Quotes, Sayings, Verses, Poems Holy Week 2015 begins on Palm Sunday, 29 March and ends on Holy Saturday, 4 April. It is the last week of lent season or the week before Easter Sunday. Christians around the world commemorate the Passion of Christ during Holy Week which also includes Holy Wednesday, Holy Thursday and Good Friday.

Holy Week is special for Christians as it marks the last days of Jesus Christ on earth. According to the Bible, Jesus rode on a donkey into Jerusalem on Palm Sunday, washed the feet of His disciples on Holy Thursday and was crucified on Good Friday before resurrection on Easter.

Christians observe the week in penance, fasting and sending good wishes to friends, relatives and loved ones. 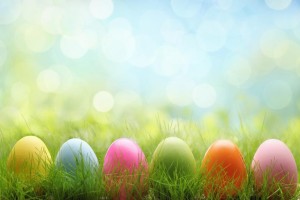 1. "The resurrection gives my life meaning and direction and the opportunity to start over no matter what my circumstances." -- Robert Flatt

2. "To a Christian, Easter Sunday means everything, when we celebrate the resurrection of Jesus Christ." -- Bernhard Langer

4. "The great gift of Easter is hope - Christian hope which makes us have that confidence in God, in his ultimate triumph, and in his goodness and love, which nothing can shake." -- Basil Hume

5. "It is the hour to rend thy chains, The blossom time of souls." -- Katherine Lee Bates

6. "Easter is very important to me, it's a second change." -- Reba McEntire

7. "The joyful news that He is risen does not change the contemporary world. Still before us lie work, discipline, sacrifice. But the fact of Easter gives us the spiritual power to do the work, accept the discipline, and make the sacrifice." -- Henry Knox Sherrill

8. "Here is the amazing thing about Easter; the Resurrection Sunday for Christians is this, that Christ in the dying moments on the cross gives us the greatest illustration of forgiveness possible." -- T.D. Jakes

9. "Easter is the demonstration of God that life is essentially spiritual and timeless." -- Charles M. Crowe

10. "Easter is meant to be a symbol of hope, renewal, and new life." -- Janine di Giovanni

11. "Let every man and woman count himself immortal. Let him catch the revelation of Jesus in his resurrection. Let him say not merely, "Christ is risen," but "I shall rise." -- Phillips Brooks

12. "Do not abandon yourselves to despair. We are the Easter people and hallelujah is our song." -- Pope John Paul II

13. "On Easter Day the veil between time and eternity thins to gossamer." -- Douglas Horton

14. "Let the whole world join the happy lay, Let the hills and vales break forth in singing, Christ, the Lord of Life, is ris'n today." -- Lizzie Akers

15. "Those have a short Lent, who owe money to be paid at Easter." -- Benjamin Franklin 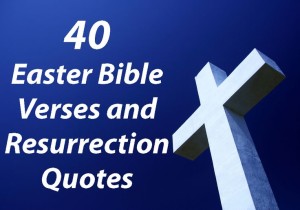 40 Easter Bible Verses on the Resurrection

1. “The Christ will suffer and rise from the dead on the third day, and repentance and forgiveness of sins will be preached in his name.” (Luke 24:46-47)

2. “He was delivered up for our trespasses and raised for our justification.” (Romans 4:25)

3. “Christ died for our sins according to the Scriptures, that he was buried, that he was raised on the third day.” (1 Corinthians 15:3-5)

4. “According to his great mercy, he has caused us to be born again to a living hope through the resurrection of Jesus Christ from the dead.” (1 Peter 1:3)

7. “We know that Christ, being raised from the dead, will never die again; death no longer has dominion over him.” (Romans 6:9)

8. “…that I may know him and the power of his resurrection, and may share his sufferings, becoming like him in his death…” (Philippians 3:10)

9. “I am the resurrection and the life. Whoever believes in me, though he die, yet shall he live, and everyone who lives and believes in me shall never die. Do you believe this?” (John 11:25-26)

10. “…just as Christ was raised from the dead by the glory of the Father, we too might walk in newness of life.” (Romans 6:4)

12. “Who is to condemn? Christ Jesus is the one who died—more than that, who was raised— who is at the right hand of God, who indeed is interceding for us.” (Romans 8:34)

13. “If you confess with your mouth that Jesus is Lord and believe in your heart that God raised him from the dead, you will be saved.” (Romans 10:9)

15. “He will swallow up death in victory; and the Lord GOD will wipe away tears from off all faces.” (Isaiah 25:8)

16. “But he was wounded for our transgressions; he was crushed for our iniquities; on him was the chastisement that brought us peace, and by his stripes we are healed.” (Isaiah 53:5)

20. “If Christ has not been raised, your faith is futile and you are still in your sins.” (1 Corinthians 15:17)
Christian Quotes on the Resurrection of Jesus Christ

22. “Our sin reached its full horror and found its most awful expression in the cross.” (Colin Smith)

23. “The tomb of Christ is famous because of what it DOES NOT CONTAIN.” (Sam Morris)

25. “The resurrection of Jesus changes the face of death for all His people. Death is no longer a prison, but a passage into God’s presence. Easter says you can put truth in a grave, but it won’t stay there.” (Clarence W. Hall)

26. “The primary source of the appeal of Christianity is Jesus – His incarnation, His life, His crucifixion, and His resurrection.” (K. Latourette)

27. “Luke associates John with Peter in Acts, when, after the Resurrection, that strange boldness had come upon the disciples.” (Alfred Noyes)

28. “The cross is a one time visual representation of God’s grief over sin.” (Dean L. Harvey)

29. “Live in the awareness that Christ lives and that He lives in His people.” (Julien B. Weil)

31. “The best proof that Christ has risen is that he is still alive. And for the immense majority of our contemporaries, the only way of seeing him alive is for us Christians to love one another.” (Louis Evely)

33. “All of heaven is interested in the cross of Christ, hell afraid of it, while men are the only ones to ignore its meaning.” (Oswald Chambers)

34. “According to the laws of legal evidence used in courts of law, there is more evidence for the historical fact of the resurrection of Jesus Christ than for just about any other event in history.” (Harvard Law Professor Dr. Simon Greenleaf)

35. ♪ ♫Hear the bells ringing they’re singing “Christ is risen from the dead!” / The angel up on the tombstone said / He is risen just as he said! (Keith Green, “The Easter Song”)

36. “There is no historic incident better or more variously supported than the resurrection of Christ.” (Brooke Foss Wescott)

39. “Our Lord has written the promise of resurrection, not in books alone, but in every leaf in springtime.” (Martin Luther)

41. “Our justification hinges on a risen life, present in us now because Christ is present with us now.” (Paul F.M. Zaul)

42. “Our old history ends with the cross; our new history begins with the resurrection.” (Watchman Nee)

43. “The entire plan for the future has its key in the resurrection.” (Billy Graham)

44. “There is more evidence that Jesus rose from the dead than there is that Julius Caesar ever lived or that Alexander the Great died at the age of thirty-three.” (Billy Graham)

"My mom used to say that Greek Easter was later because then you get stuff cheaper." Amy Sedaris

"I'm a little hoarse tonight. I've been living in Chicago for the past two months, and you know how it is, yelling for help on the way home every night. Things are so tough in Chicago that at Easter time, for bunnies the little kids use porcupines." Fred Allen

"A strangely reflective, even melancholy day. Is that because, unlike our cousins in the northern hemisphere, Easter is not associated with the energy and vitality of spring but with the more subdued spirit of autumn." Hugh Mackay

"Easter says you can put truth in a grave, but it won't stay there." Clarence W. Hall