TORQUE Mobile – the leading local tablet brand in the Philippines, today launched the “April-icious Mobile Deals” campaign where the hottest phones and tablets are up for grabs at massively discounted prices. A total of 40 different devices have been marked down for Aprilicious Deals, and will remain so until supplies last. 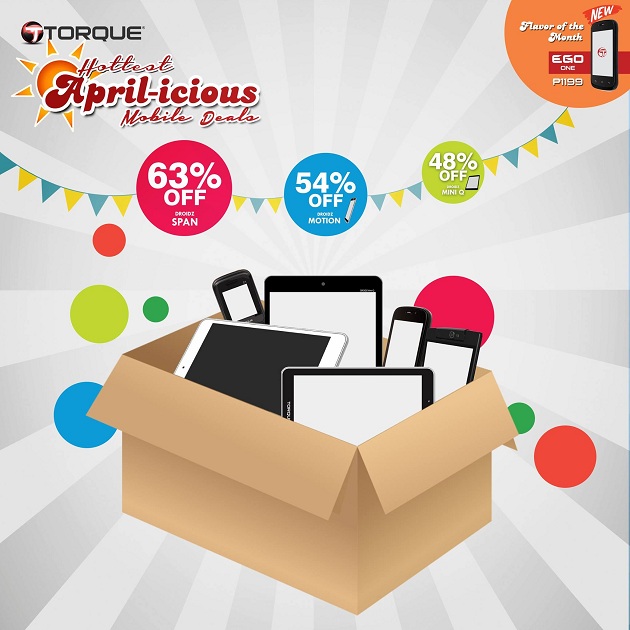 The April-icious Mobile Deals campaign brings the very best of Torque out into the forefront, and what’s more, prospective buyers can enjoy huge discounts of up to 60% off on all models. The various discount sale prices apply to basic phones, smartphones, and tablets alike.

One of the units on sale is the Torque DROIDZ Span, available with a 63% OFF discount from P3,499 to only P1,299. The DROIDZ Span is a handy 5-inch Android phone with dual cameras (5MP and 3MP), capacitive menu keys, and a slim profile at only 9.8mm thin. The Aprilicious Mobile Deals pricing makes it one of the most affordable 5-inch Android phones in the country.

Meanwhile, the Torque DROIDZ Slate HD is also getting a huge discount of 29% OFF, bringing its price down from P5,499 to only P3,888. It’s now one of the most affordable phablets under the 4k price point, as it features a 5.5-inch IPS HD display, 1GB RAM and 8GB storage, all in a sleek and svelte 7mm-thin body.

Many other phones and tablets from the DROIDZ series are available with discounts and are included in the Aprilicious Mobile Deals sale. Don’t miss out on this awesome summer promo and visit the nearest Torque Mobile concept stores, kiosks, and retail outlets today for more info. 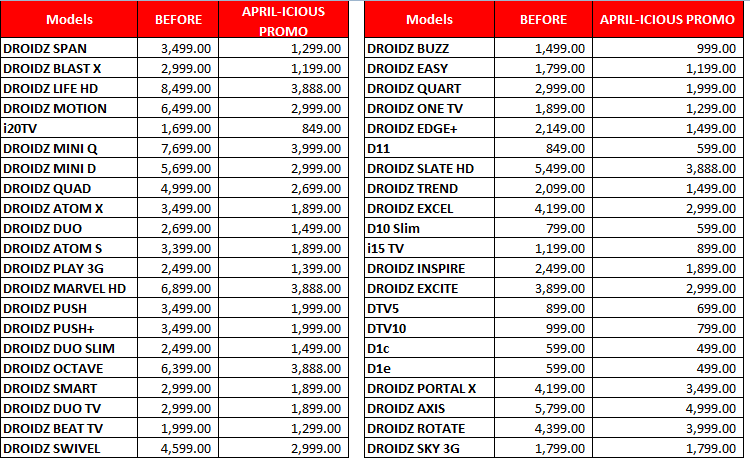