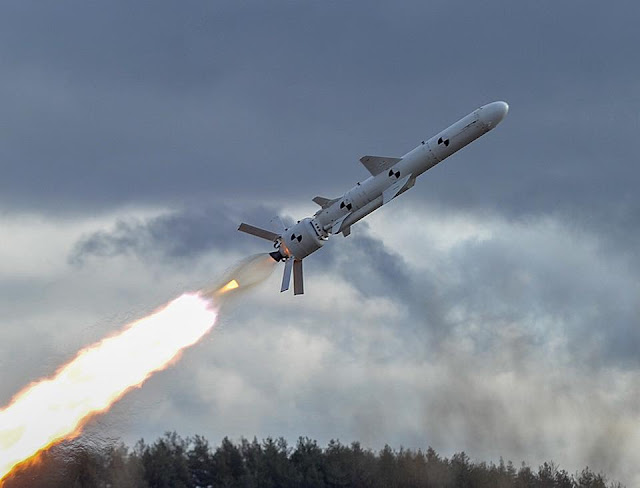 The container launched surface to surface missile was developed by the State Kyiv Design Bureau "Luch" in cooperation with other state and private defense enterprises of Ukraine.

The missile is based on the Soviet designed Kh-35 subsonic tactical cruise missile that Russia put into service in 2003.

Initially boosted using a solid state rocket motor and then take over by a turbofan engine in the cruise phase, the Neptune have either a 130 km range or 260 km (if based on the Kh-35U).

The missile is 4.4 m long, 0.42 m in diameter and weighs over 600 kg. It carries a 145 kg high-explosive fragmentation penetrator warhead.

Cruise flight phase is controlled by inertial navigation system to keep the missile on the preset path and to steer it to the target area. Terminal guidance is provided by an ECM-resistant active radar seeker.

Due to its sea-skimming flight profile, the Neptune can evade enemy detection and hence can penetrate enemy ship’s self-defences with enhanced probability, providing covert combat employment and surprise strike capabilities.

The missile cruises at an altitude ranging from 10-15 m, while during terminal phase it will hug the sea at 4 m altitude to evade detection.

In its naval strike role, the Neptune can engage Navy surface ships displacing up to 5,000 tonnes.