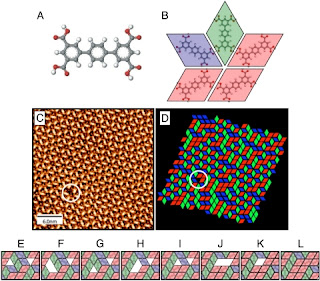 I am still organising the seminars in our group every Friday. In the last one, we had a very Interesting one given by Prof. Juan Garrahan, from Nottingham University. The title was the same as in this post, Molecular Random Tilings. Although I don't have the version of the talk he gave, you can access a very similar previous version on his webpage through this link.

MICRO BUSINESSES
Fashion blogging: Lesson learnt+ Pers…
How Do Bed Bugs Reproduce?
How to Organize a Blog Post and Struc…
It’s Me – Chapter 8
The idea is a very interesting and beautiful one. The chemical problem is related to an organic molecule which is called TPTC or p-terphenyl-3,5,3’,5’-tetracarboxylic acid. It has the form below:

These molecules are adsorbed onto a substratum of graphite and bind together by means of hydrogen bonds in one of two possible relative configurations. After the deposition process, they cover the substratum forming an hexagonal Molecular Lattice. In fact, you can associate to each of these molecules a rhombus and, in doing so, each configuration of the molecular lattice can be associated a tiling of the plane (also known as a tesselation) by these polygons, which is a classic mathematical problem. It's also equivalent to another well known statistical mechanical problem, which is called the covering of the lattice by dimers, the simplest one being that on the regular lattice.
The way to associate the rhombus to the molecule is quite interesting. There are three directions for the rhombus in the plane and to each one a colour is associated (guess which...): red, green and blue. The picture in the top of this post, taken from the paper Molecular Random Tilings as Glasses by Garrahan et al., shows how the model is and the figure below, taken from an article in the AMS site (and property of Peter Beton) shows on the left an image of the molecular lattice taken by an scanning tunneling microscope and on the right the associated tiling.

The interesting thing in statistical mechanics is always to analyse phase transitions. In models like these, what is interesting is to study how the system passes from a phase dominated by Random Tilings, meaning tilings which are not ordered in the obvious way, to an ordered phase where the tiling is regular as we vary the temperature of the system. The basic quantity we need to calculate turns out to be the free energy, which will allow us to calculate everything else we want to know about the system. The beautiful thing about this model is that the free energy is proportional to the integral of the squared gradient of a field called the height field that can be defined for each point of the tiling. The cool thing is that this field can be seen in some sense as the height of the pile of 3-dimensional cubes you will certainly see when you look at the tiling!
Another very interesting aspect of this model is that it supports fractional excitations, which are very much like the anyons we already discussed in some previous posts. While the anions have fractional statistics, these defects in the tiling are triangles which are a result of imperfect matches. Two triangles form a rhombus, but then they can divide themselves and run free through the tiling. This amounts for a fractionalisation of the degrees of the freedom of the model and, as you can imagine, charges can be associated to these defects.
The details of the model are in the paper I linked to in the beginning of the post. It's worth to take a look at it as there are a lot of beautiful images and much more information about the phase diagram of the model. After the seminar, I took Prof. Garrahan to have lunch in our Business School (one of the advantages of giving seminars in our group). A friend called also Juan, which is again also Argentinian as Prof. Garrahan, accompanied us. It was a nice lunch and I would like to thank Prof. Garrahan for an excellent talk and a pleasant conversation afterwards.