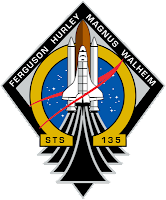 It is, after all, the last flight of space shuttle Atlantis and the last flight of any space shuttle. Ever. If you're reading this over the weekend chances are you missed it, but that's OK because thanks to modern technology accelerated by the space program (CCD cameras and computers) you will be able to watch it easily on YouTube or NASA TV. Missing it means you don't really care that much about the U.S. government space program, possibly because you don't care for space in general. It is, after all, the final frontier and you (or the United States or the world) have a lot to get through before that becomes a priority. Alternatively you may be very busy helping usher the Commercial-Space era once the Space-Shuttle era comes to an end on July 8 (a much better proposition than the Soyuz era or the Russian-Space-Capitalism era or Who's-Laughing-Now-And-Who's-Paying-56-Million-Dollars-Per-Seat era).


Either way, unless you've been closely following manned spaceflight events in the recent couple of years, you might have missed the little tidbit that this is actually the second last flight of Atlantis. In May 2010, STS-132 was the final planned flight for Atlantis and it was supposed to be prepped for launch only as a rescue vehicle for STS-134.

Like a mother refusing to accept her son is moving out for good, asking for one more hug and kiss, NASA turned STS-335 (3xx denoting potential rescue missions) into STS-135, with the potential rescue of this mission being multiple Soyuz rockets (which as of the impending launch of Atlantis will be the only game in town for hauling humans to the International Space Station for at least a few years).

As an attendee of the NASA Tweetup for STS-132 I received a Reporter's Space Flight Notepad, courtesy of Boeing. It is a great tool for reporters who generally don't have time to look up information about the vehicle, rockets, thrust, payload or how to spell names of people. The last printed page of that notebook lists the final flights of the three remaining space shuttles, with STS-133 and STS-134 both planned for 2010.

Still being rocket science (as the corny expression goes), the year after the first last flight of Atlantis unfolded quite differently, with an astronaut falling off his bicycle and cracks that necessitated a roll-back into the VAB of Discovery. Both STS-133 and STS-134 ended up flying in 2011 with Atlantis leaping its younger and older sisters and closing this era. Atlantis will also be making the shortest route of all three to its final resting place at Kennedy Space Center.

And so, in about two weeks, the space shuttle era will end about 30 years after it started with STS-1, Columbia, John Young and Bob Crippen.

JoJo Siwa le presenta al mundo a su n…
Signs Of Carpenter Ants In Your Home
Spider-Man: If This Be My Destiny - L…
Car Sex The Best 6 Positions
How to Write Your About Me Page: Guid…