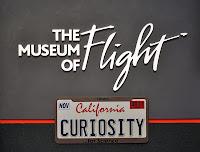 Human curiosity is now on Mars. While no human is in the flesh on the red planet, a car-sized 6-wheeled rover of human creation landed on Mars on August 5th. The humans who sent it there knew it landed at 10:31pm Pacific time, which was about 14 minutes after it actually did. I was one of the about 600 people who came that evening to the Museum of Flight in Boeing Field, Seattle WA, to congregate with fellow space enthusiasts, hear about the landing challenges from people who made it possible and share the excitement and anticipation of the unfolding crazy-complex landing full of firsts.


The Museum of Flight is a great place to visit for kids aged 3 to 103 unless you are plane-averse. It is chock-full of planes including icons such as the Blackbird and one of the 20 (19 in existence) Concorde supersonic passenger jets ever built. It even has a spot for a space shuttle that it will not get (the 3.5 shuttles are going here). On the evening of August 5 2012 it was the gathering spot for the Pacific Northwest around what was going to be either an amazing accomplishment of human engineering ingenuity and a scientific tool to get us closer to realizing whether there could be / was life on Mars, or the biggest and most expensive hunk of metal ever to rest on the surface of another planet that was elaborately sent there by mankind. Either way, the Mars Science Laboratory, also known as Curiosity, was to end its 9-month journey from Earth to Mars one way or another.

When I got to the museum a little after 7:30pm (3 hours before the landing), the William M. Allen theater at the museum was almost packed. I found a spot close to the back, next to Erika, a financial analyst at Boeing and her husband. We listened to an impressive line of people from the NASA Jet Propulsion Laboratory (JPL, who made the rover), Aerojet (who made rocket motors for the landing) and Planetary Resources (of which Chris Voorhees, VP of Spacecraft Development, was a pivotal member of the MSL project) talk about the hardware, software and innovation. Over a decade of design, planning, building, launching and anticipation led to these last few hours and even more so to these last 7 minutes. The crowd at the museum continued to grow and spilled over to other rooms where they could watch what was happening at the theater on screens. At different points in time the distance of MSL to Mars was announced, and the contagious excitement in the room grew with every number - 20,000 miles, 18,000, and so on. 20,000 miles is a big distance, but relative to the entire voyage of about 354 million miles it is comparable to the last 29 feet in a 100 mile drive.

About 7 minutes before MSL started flirting with the thin Mars atmosphere (or 21 minutes before we could know about it through its transmissions) the audience was given peanuts. No, there was no waiver to sign at the door and I didn't see anyone rush out due to being allergic (reverse correlation between space enthusiasm and peanut allergies? someone needs to look into that...). Eating peanuts is a NASA (and JPL specifically) superstition - the story goes that after a few failures in the 1960s missions accompanied by peanut consumption started becoming successful. I ate the peanuts and so did everyone around me. Hey, I did my share for the success of this mission, plus I also like peanuts.

A few minutes later, Curiosity appeared as a computer rendering on the large screen in a simulation that was being fed by data relayed back from almost 14 light-minutes away (about 250 million kilometers or 150 million miles away). For us on Earth, it was the beginning of what has become to be known the "7 minutes of terror". All the while, for Curiosity, the 7 minutes of terror actually ended 7 minutes ago and there was nothing anyone on Earth could do to help in case something was to go wrong. You can watch the captivating NASA video below...

As we sat there, each of the many complicated, risky, autonomous steps to land Curiosity safely on the surface of Mars, a process that was about to be tested as a whole for the first time, was unfolding. Hitting the atmosphere at the right spot, slowing down, dropping the heat shield, opening the supersonic parachute, slowing down more, ditching the parachute, starting the rocket engines of the sky-crane, going sideways to avoid hitting the parachute, lowering the rover on wires to avoid raising too much dust, touch-down, sending the sky-crane away to avoid slamming onto the rover, confirming landing position, and finally getting the first pictures from the surface. Each of these milestones in close succession of each other were accompanied by clapping and cheering, with a standing ovation of great relief and joy when the landing sequence was complete. It took a few seconds to sink in, and I mean this with the utmost respect for NASA engineers and every contractor and country who contributed to this mission - this actually worked...

Immediately after the landing people started pouring out. A few dozen people hung around for a while longer. For me it was an opportunity to absorb some of the spirit and excitement in the room, others were waiting for the joyous press conference which followed (I ended up listening to most of it on my iPhone while driving home, streaming NASA TV).

Here's a video of the final moments of the landing I took with my camera. It conveys but a small fraction of the buzz in the room...

Now, with the best proxy of human curiosity to date on Mars, as appropriate for this day and age, you can follow Curiosity on Twitter ([email protected]), Facebook or on the mission website. Did Mars once harbor life? Does it now? Will it be able to in the future? These are all questions that robots may be the ones to answer or at least get closer to answering until launch is cheaper and humans are more resilient to the rigors of deep space.