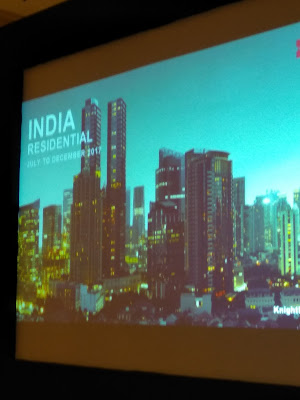 Knight Frank India has launched the eighth edition of its flagship half yearly report – India Real Estate. It presents a comprehensive analysis of the office Market performance of Bengaluru for the period July – December 2017 (H2 2017).
Residential Takeaways:
·         The unsold inventory has come down by 10% YoY in H2 2017, courtesy competitive pricing in a sluggish market. However, the quarter-to-sell (QTS) graph indicates that India’s IT capital would take more than two years to offload unsold homes in the city.
·         New projects dwindled by a 37% YoY in H2 2017 as developers’ focus shifting on two primary aspects – fast tracking delivery of under construction projects and compliance to RERA.
·         Although the weightage average price fell by 5% in H2 2017, home sales plummeted by 34% during the same period.
·         Is it a good time to buy a house in Bengaluru? Developers’ focus on fast tracking delivery of under construction projects coupled with marketing campaigns at IT parks, widespread promotion of RERA registered projects, discounts on base selling price and , festive period freebies and the drop in average weightage price are collectively wooing buyers.
·         Neighbourhoods such as Sarjapur Road, Kanakpura Road and Devanahalli were among the pick of residential micro markets. Upcoming metro connectivity to Whitefield has pushed absorption pace of residential units in this location.
Office Takeaways:
·         With total transaction volume of 5.91 mnsq.ft at a rate of 12% YoY growth, Bengaluru reaffirmed its top position as the Leading Office Market among eight cities
·         Small office spaces in vogue. More than eight out of 10 office deals comprise space take up of less than 50,000 sq. ft.
·         While the average deal size shrunk by 37% YoY in H2 2017, the total number of deals rose by more than 80% during the same period
·         The share of the IT/ITeS sector shrunk to 44% of the gross leasing in H2 2017, 20% lower than the space consumed in H2 2016
·         Bengaluru office markets records staggering weighted rental growth of 9.% YoY
Speaking about the findings, Shantanu Mazumder, Senior Branch Director – Bengaluru said,“Bengaluru’s residential markethas been impacted by a variety offactors impacting both demand andsupply.Residential sales have witnessed a 34% YoY decline in H22017 over H2 2016. On the launches front, though the declining trend began since2014, the rate of decline was never asmarked as in 2017 as the new supplynosedived by a mammoth 71% from thepeak witnessed in 2013.North and South zones have witnessedmaximum curtailment of new launchesregistering a YoY decline of 66%and 52%, respectively, in H2 2017,as developers put new projectlaunches on the backburner whilst theyprioritised RERA compliance. On a YoYbasis too, overall city launches declinedby 37% in H2 2017.Competitive pricing coupled with asharp decline in new launches in 2017has worked in the favour of Bengaluru developers; as a result, the unsold inventory has gradually declined by10% YoY in H2 2017. In terms of micro-markets Sarjapur Road, Kanakpura Road, Thanisandra and Devanahalli have been the buyers’ choice; however, with the metro construction in full swing, Whitefield too has pickedup pace.
In H2 2017, the total transactionvolume was noted at 5.91 million sqft registering a 12% YoY growth over H2 2016. This high transaction volumereaffirms Bengaluru’s top position asthe leading office market across the topeight cities.Of all the micro markets, Outer RingRoad (ORR) continued to fare well interms of occupier stickiness accountingfor 47% of total transactions in H22017 thereby recording a massive YoY growth of 83% over H2 2016. Despitelimited new supply and low vacancy,the absolute quality of office assets keptoccupiers interested in leasing any newspaces that became available in thismicro market.An interesting trend that emergedduring H2 2017 was the dominanceof smaller deal sizes in the totaltransaction volume with 82% of the total numberof deals belonging to a spacetake up of less than 50,000 sq ft.TheIT/ITeS sector accounted for 44%of gross leasing in H2 2017, 20% lower than the space consumedin H2 2016. Amidst automation andreskilling challenges, cautious hiringprevailed in this sector thus deterring the expansion momentum.E-commerce, on the other hand, emerged as a surprisefrontrunner for space consumptionaccounting for a 16% share in totaltransaction volume.Co-working operators, too, continued expanding footprint accounting for a 6% share in H2 2017 leasing volume. ORR also accounted for 69% of the 4.4 million sqft of newsupply in H2 2017 which was well received by occupiersand eased the supply crunch in this belt, albeit in the short-term.”

10 of Britain’s best market towns for…
Dead Ends in Cryptanalysis #2: Timing…
10 Health factors that you can improv…
Holcim Philippines shares contributio…
How to Get Rid of Mice – 5 Methods


This post first appeared on Editor-manu-sharma, please read the originial post: here
People also like
10 of Britain’s best market towns for a weekend break
Dead Ends in Cryptanalysis #2: Timing Side-Channels
10 Health factors that you can improve with Delta 8
Holcim Philippines shares contributions to environment stewardship in govt, private sector talks
How to Get Rid of Mice – 5 Methods