Tags: cloud
August 4th 2013
View original
Yesterday, Alabama Meteorologist James Spann (@spann) tweeted this beautiful picture of Kelvin-Helmholtz clouds at the Alabama Air National Guard facility at the Birmingham-Shuttlesworth International Airport. The clouds also known as "wave clouds" are defined by the Cloud Appreciation Society as, "the result of shearing winds up at cloud level. A particular type of turbulence can develop in a layer of Cirrus cloud, which happens to form below an inversion* between air currents of differing speeds and/or directions. Sea waves break as their bases are slowed down upon reaching shallow water and their crests surge ahead. Cloud waves break in the same way: when their crests are pushed ahead of their troughs by the difference in air currents." The occurrence of this kind of cloud formation is rare.  They are more frequently seen in San Francisco. 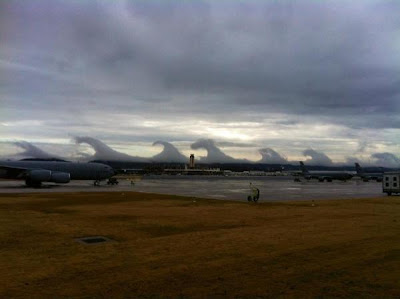 Here is a link to more pictures of this rare occurrence.

New Ways of Working: Adapting to Ever…
When Will Joy and Laughter Fill Our S…
My Top Ten Favorite Business Tools fo…