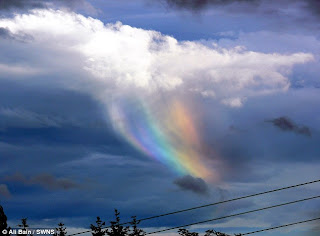 I was browsing the news the other day and saw an article by the DailyMail, showing a beautiful Circuhorizontal arc or 'fire rainbow' in the sky. The photo was taken by Ali Bain and the article states that the phenomena lasted only 20 seconds, before it disappeared. Thank goodness Mr. Bain had his camera handy. Such wonderful creations surely should be captured on film.

Despite it's name, the phenomena is not produced by fire but by the sun's position (higher than 58 degrees) and plate-like shaped ice crystals in cirrus clouds. This combination results in a very big halo which is parallel to the horizon. The cirrus cloud allows for parts of the arc to be visible to the eye. Another arc which is produced by high sun position is an Infralateral arc. These arcs tend to curve upward. A Circuhorizontal arc is also not rainbow but a halo.

For more information on Circuhorizontal arcs and Infralateral arcs, check out this link.

What to do with Shazam/Captain Marvel…
Bloggers Get Real: Louise of Foxes Fa…
Bloodstained: Ritual of the Night Rev…
Bachelor Party
2019 Lamborghini Urus Price, Specs

What to do with Shazam/Captain Marvel in DC comics.

Bloodstained: Ritual of the Night Review