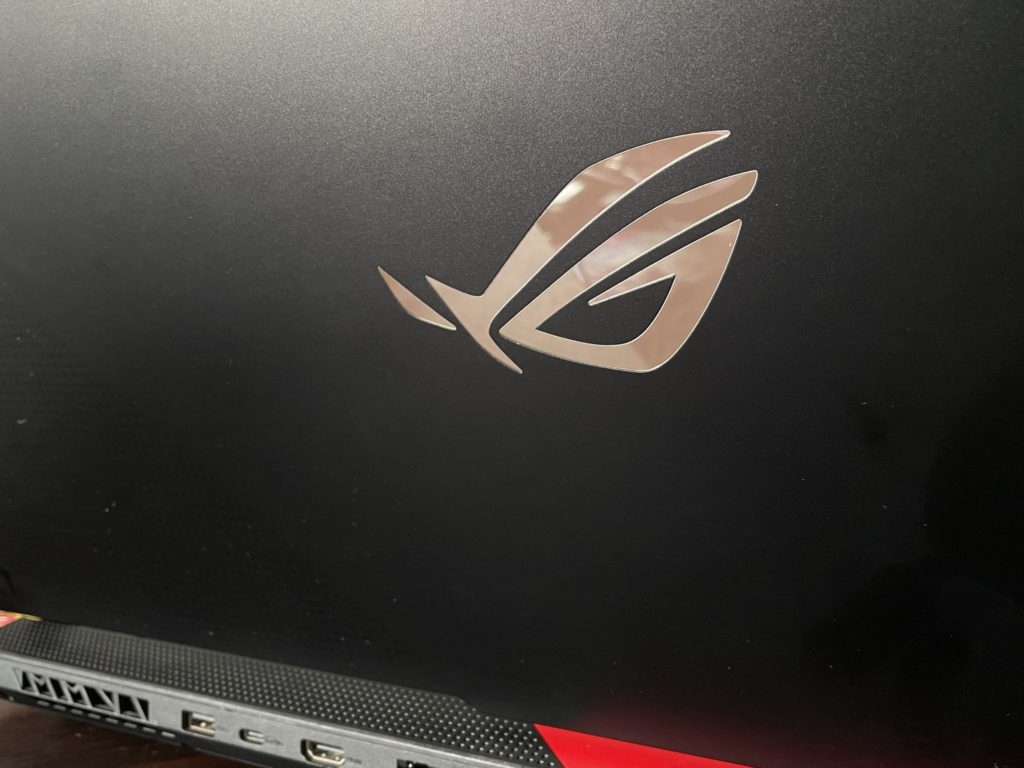 The ROG Strix G15 AMD Advantage Edition is your quintessential ROG machine – stylist, flashy and chunky. The laptop measures in at just 25.9mm and weighs 2.5Kgs; not exactly a thin and light laptop, but you can easily carry it around in your backpack. However, the thickness is justified considering there are vents on both sides and one more on the back. As soon as you take the laptop out of the box, you will see a glowing metallic ROG logo on the lid complemented by a tiny AMD logo on the edge near the hinge. 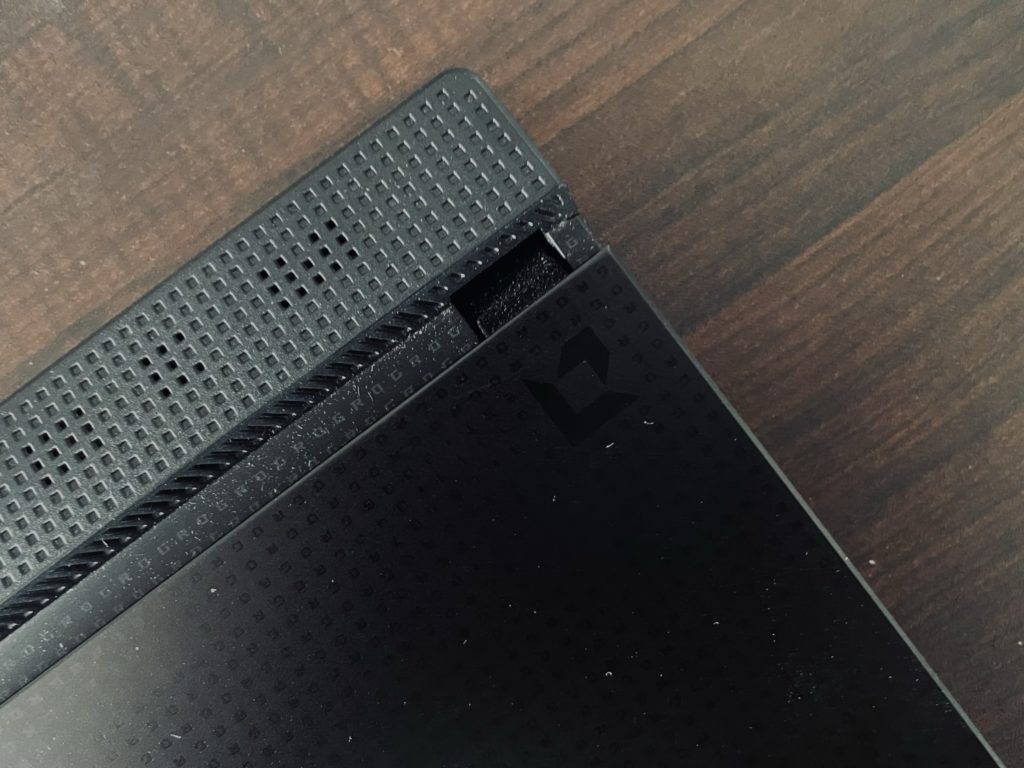 The top of the laptop and the keyboard deck are carved out of aluminium, while the rest is plastic. The hot-swappable armor cap in red adds up to the gamer aesthetics. You get a black and silver armor cap inside the box. The laptop is nothing less than a light fest- first, every key is lit up with the RGB key beneath it, and then there is an RGB strip at the bottom running around the chassis or, as Asus prefers to call it, wraparound light bar. 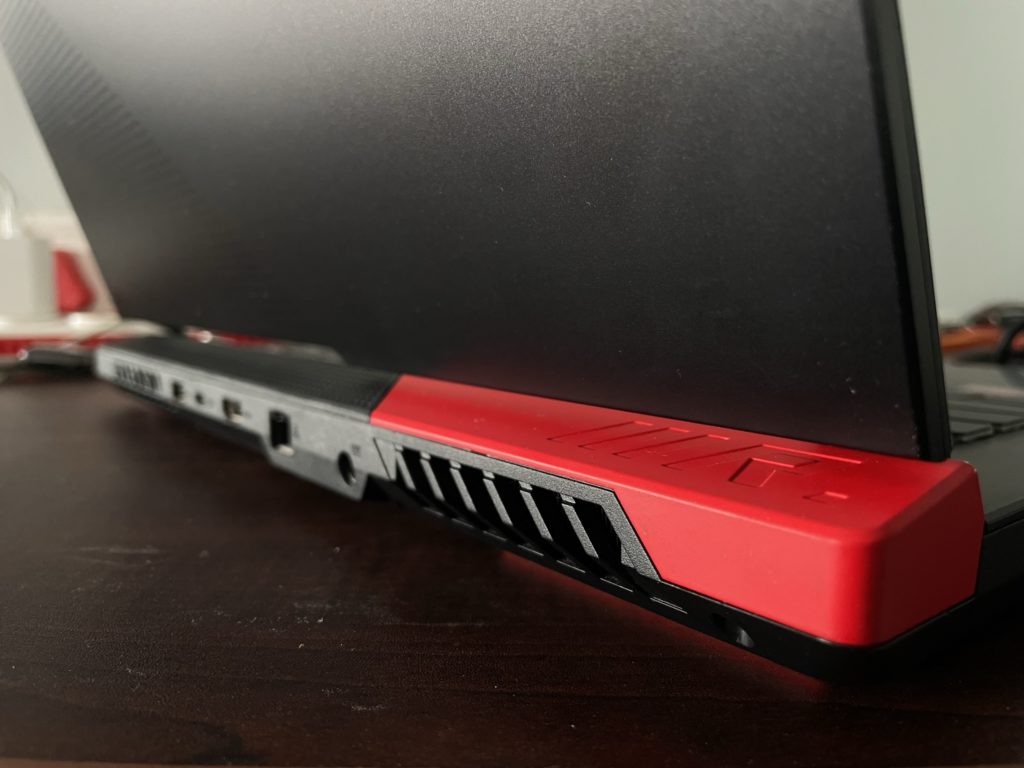 The speakers are on the bottom, and they sound pretty detailed and loud when kept on a flat surface but lack bass. And there is no webcam, which is not a big deal, but since the target audience of this laptop is likely to have an external webcam. But it could be an issue if you want to attend a quick Zoom meeting on the go, again it is quite unlikely because you will not be roaming around with a gaming laptop on a flight. 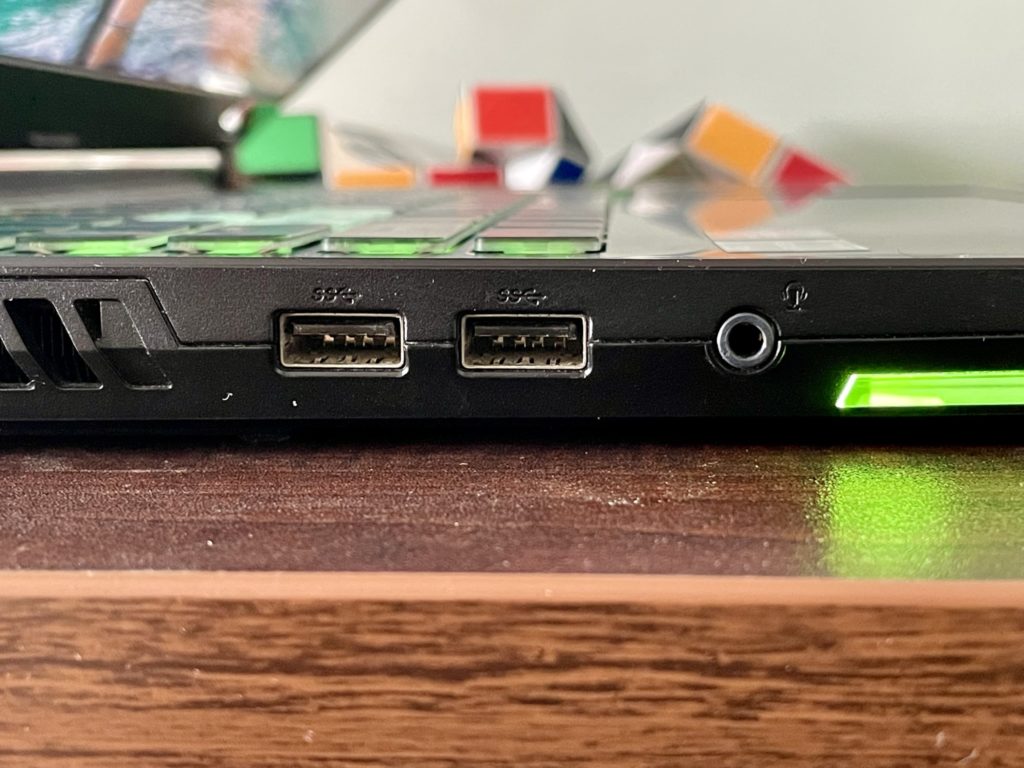 As far as ports are concerned, there are plenty of them. There are two USB-A ports and a combo 3.5mm audio jack on the right side; both the USB-A ports are Gen 1. The rest of the ports are located on the back, including a USB-A Gen 2 port, USB-C Gen 3.2 port, HDMI, Ethernet, and the charging port.

The build quality of the ROG G15 AMD Advantage doesn’t feel cheap, but the build quality could have been better, considering it cost Rs 1,50,000. Overall, the laptop is sturdy, and the hinge nicely holds the display and deck together. The keyboard deck is not prone to flex unless you are trying too hard. The ports are located where they should be, making things easy for the folks who connect a lot of accessories to their machines. 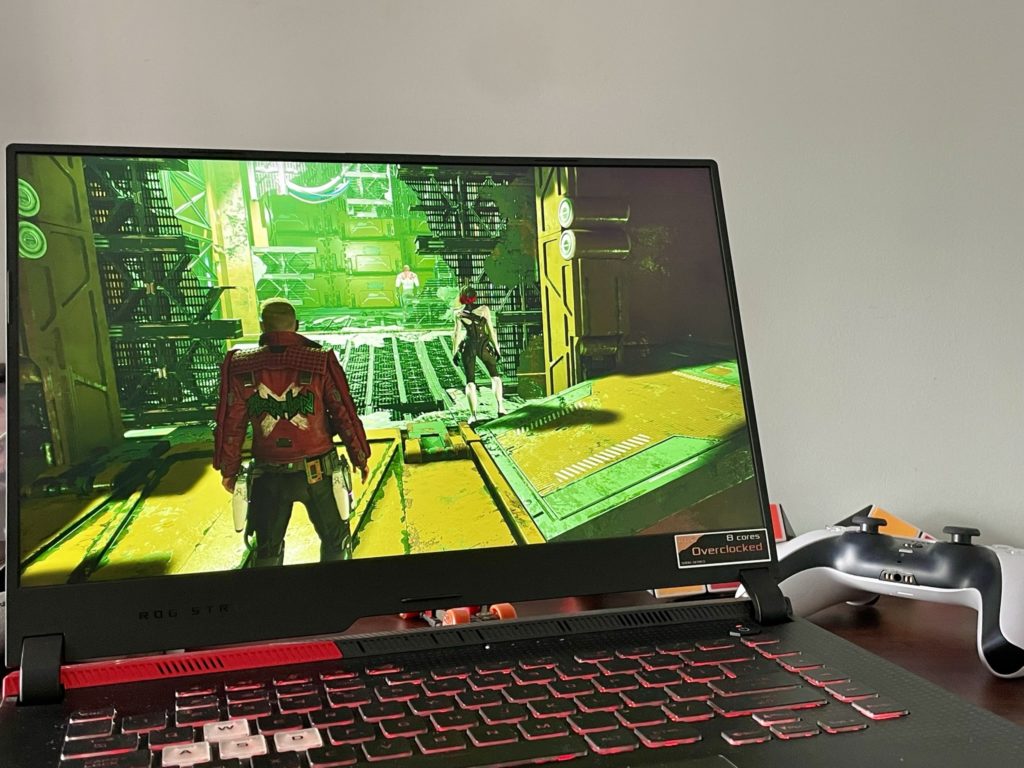 Let me run down the display specifications of the ROG G15 AMD Advantage. The laptop features a 16:9 15.6-inch WQHD IPS panel with a resolution of 2560 x 1440 pixels, 165Hz refresh rate and 3ms response time. Further, the panel covers 100% of the DCI-P3 colour gamut and supports AMD’s FreeSync Premium technology. You also get an anti-glare coating on the top of it. No doubt the display is fast, but it is not very bright. The AMD FreeSync Adaptive support works fine in keeping the display fast when needed. But, as said, the panel is quite dull, the colours look washed out, and the details are disappointing as well. However, you can choose among the different display presets as per your preferences. 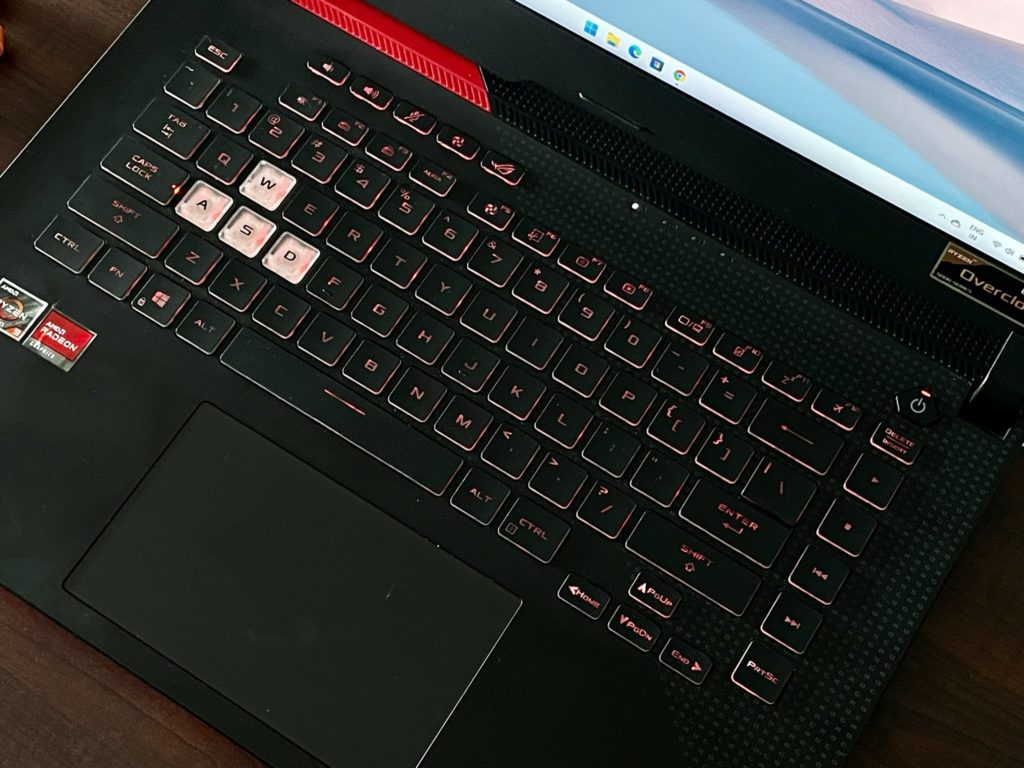 The keyboard here is fine, if not bad. The keys have a decent amount of spacing and travel, but it is not as good as some of the other gaming machines from Asus. The keys feel mushy, and they are not as tactile as many would prefer. Even while gaming or writing, I never faced any major issues, but better switches would improve the experience.

Now trackpad is something that needs to be appreciated here. The trackpad is big enough than most gaming laptops you would come across. It is precise, smooth and even supports gestures. Honestly, it makes me sad that such a good trackpad is going to be a waste here because most people will connect an external mouse anyway.

Underneath the chassis, the laptop is powered by the AMD’s best – the Ryzen 9 5900HX paired with the Radeon RX 6800M graphics card. Both the CPU and GPU are AMD’s top of the line hardware paired with 16GB of DDR5 RAM and 1TB of M.2 NVMe SSD, and no doubt, this variant of ROG G15 is an absolute AMD beast. The Ryzen 5900HX features 8 cores and 16 threads, clocked at 3.3GHz and a boost clock speed of 4.8GHz. Meanwhile, the Radeon RX 6800M GPU competes with the Nvidia RTX 3060 and even tries to inch towards the RTX 3070 territory.

The Ryzen 9 5900HX inside this machine handles whatever is thrown at it with ease, whether you are opening dozen of chrome tabs or running benchmarks. And, following the rituals, I ran a couple of CPU benchmarks on the Strix G15 AMD Advantage Edition. In Geekbench, the Strix G15 scored 1507 in the single-core test and 8,103 in the multi-core test. The 5900HX aced in other benchmarks as well. In Cinebench R23, the machine gets a single-core score of 1,439 and a multi-core score of 11,652. In PCMark 10, the laptop scored 7,407 points.

Now coming over to the graphics performance of the ROG Strix G15 AMD Advantage Edition, the Radeon RX 6800M GPU performs much better than the RTX 3070 while having a much lesser TDP of 145W. The RX 6800M under the machine delivers steady frame rates in high graphics settings. The laptop delivered 70-80 fps while playing Need For Speed Heat and Forza Horizon at high graphics settings. Meanwhile, the Guardians of the Galaxy was close to 90 fps, with Ray Tracing turned on at 1440p resolution. And I got a 60 fps average at the highest graphics settings while playing Control. And the less demanding titles such as Apex Legends or Valorant were running in the range of 150-180 fps. So, in a nutshell, the laptop is much capable of running whatever game you want to play. However, do remember to turn on the Extreme mode to enjoy the game without issues.

However, one strange thing happened during my time with this laptop; it turned off out of nowhere every time I tried running the 3DMark. As far as I understand, the issue seems to be limited to my unit since no one on the internet has not reported any such issue with the laptop. But, don’t worry, as there have been no performance issues whatsoever, even while gaming. Fortunately, I successfully managed to run the GFXBench, where the laptop managed to pull 164.951 fps in the Aztec Ruins DirectX 12 (High Tier).

The thermals on this laptop are great too. After an hour of gaming, the CPU hovered around 80-85 degrees Celcius while the GPU was around 75 degrees Celcius. Asus offers three different modes, Silent, Performance and Extreme mode. The “Silent” mode is intended if you are doing casual web browsing or streaming, while the “Performance” and “Extreme” modes are meant to be turned on while playing the game. Well, I advise you to switch to the “Extreme” mode for the best gaming performance, but yes, you will have to tolerate the frustrating sound of the fans whirling inside the hood.

I have to say it, AMD has really mastered efficiency over the last few years, and the AMD powered Strix G15 is a prime example of that. The laptop manages to last for around 8-9 hours on a day involving a mix of web browsing, streaming and writing. And even the gaming performance is quite good while on the battery. As said before, the laptop performs the best in the “Extreme” mode, and for that, you need to plug it into a power source. And believe me, the charger is the last thing you would want to carry around. It feels heavier than the laptop itself. But even if you don’t have the charger around, the laptop can easily last a day at work. 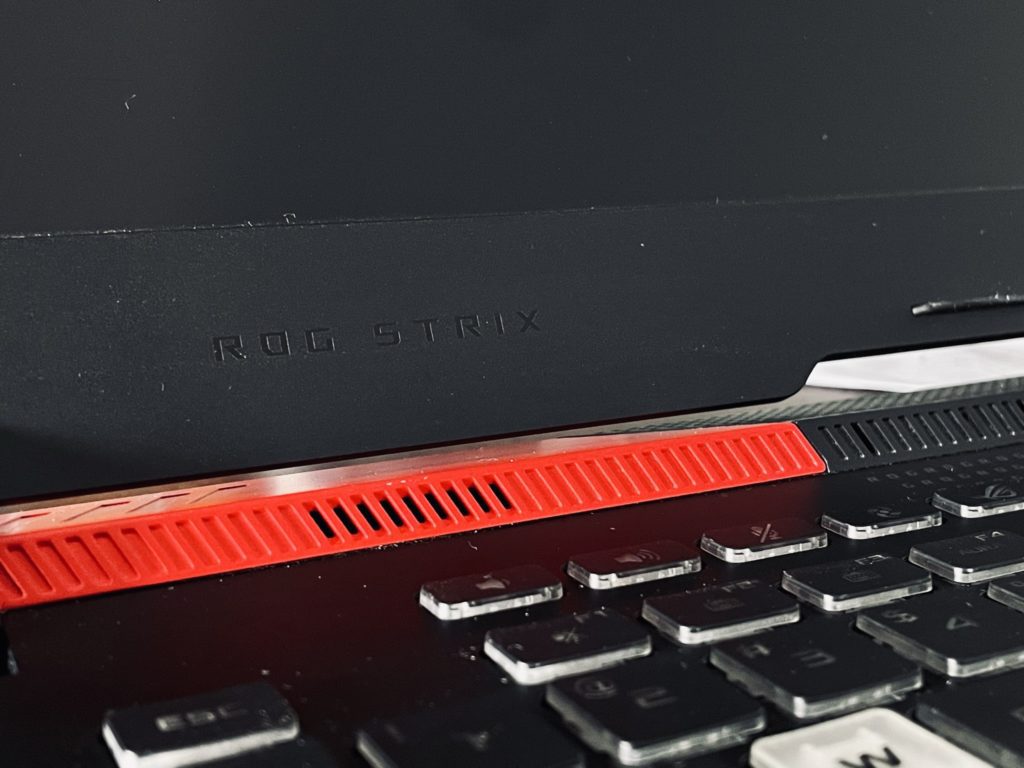 The Asus ROG Strix G15 AMD Advantage Edition is a pricey machine, but this AMD powered machine delivers on every front you would expect from a gaming laptop. It outperforms some of the ultrabooks in terms of battery life, but it is not a machine to bring to your workplace. The snappy display and robust processing power make it one of the competent options for around Rs 1,50,000.