Sony might have blown things up with the phones, but it’s still one of the pioneers in the industry for creating phenomenal audio products. And, do you know, Sony introduced their first in-ear headphones in 1982. It’s been 50 years since then, and while we are way past the good old Walkman era, Sony has been slaying with its current slate of audio products. I don’t know how but Sony’s doing some magic with the number ‘4’ as well.

After months of waiting, Sony finally brought the latest iteration of its ever-so-popular TWS earphones, the WF-1000XM4, to India. And they cost a handful of thousands, Rs 19,990, to be precise, placing them on the top of the stack. They are nothing but premium. If I am paying that much money, I expect them not to give me a headache remembering their name. So, I am going to call them “XM4’s” for the rest of this review and my life.

If I had to sum up my thoughts in a line or so, then XM4’s are ‘bijou’ XM3’s with the sound that will drive you nuts and Noise Cancellation that’s going to drive the person shouting at you to go nuts. But, there’s a lot to talk about these earbuds. Well, I’ve been going nuts for a month now, and here’s what I think about the XM4’s. 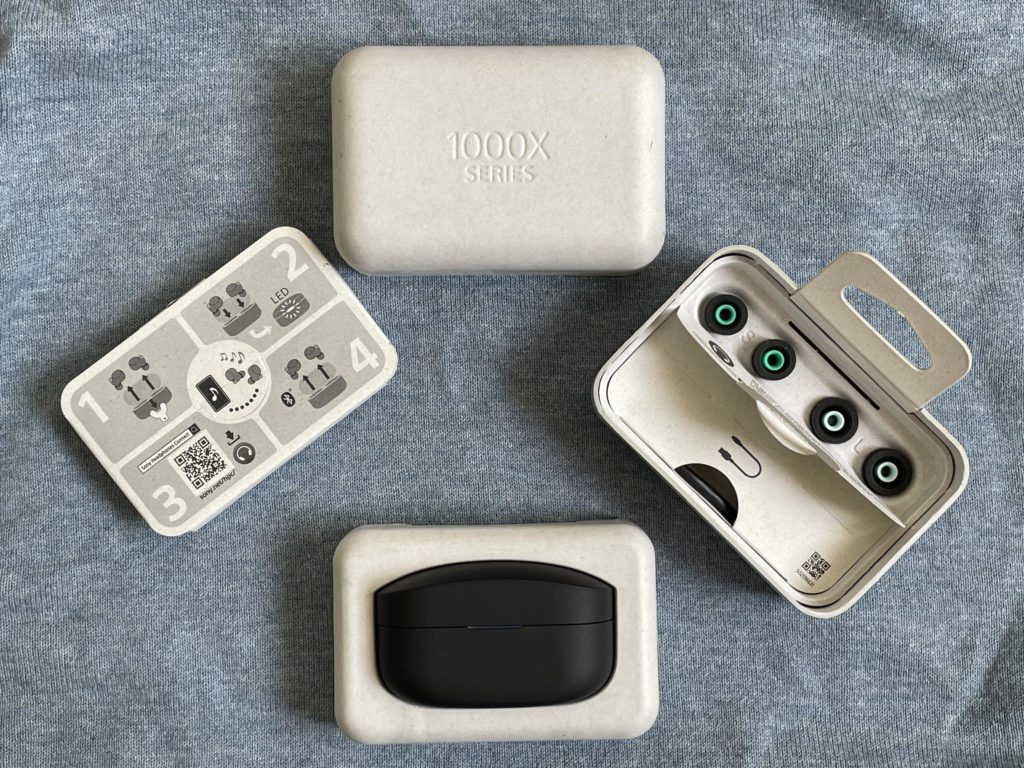 I don’t know about others, but I found the packaging quite interesting. The XM4’s come in adorable compact packaging made out of recyclable materials, and I love the packaging so much that I am going to go lookout for people selling the box for the XM4’s and buy one just to keep on my shelf. Enough about the box, now let’s skip to the hero of the show – the WF-1000XM4.

The last generation Sony earbuds – XM3’s were heavily criticized for their size and shape. It seems like Sony heard us and went back to the drawing board. Well, it took them two years, but now we have a compact and pocketable successor to the XM3’s. The XM4’s are 10% smaller than the last generation, while the case has been shrunk by half the size of their predecessor. 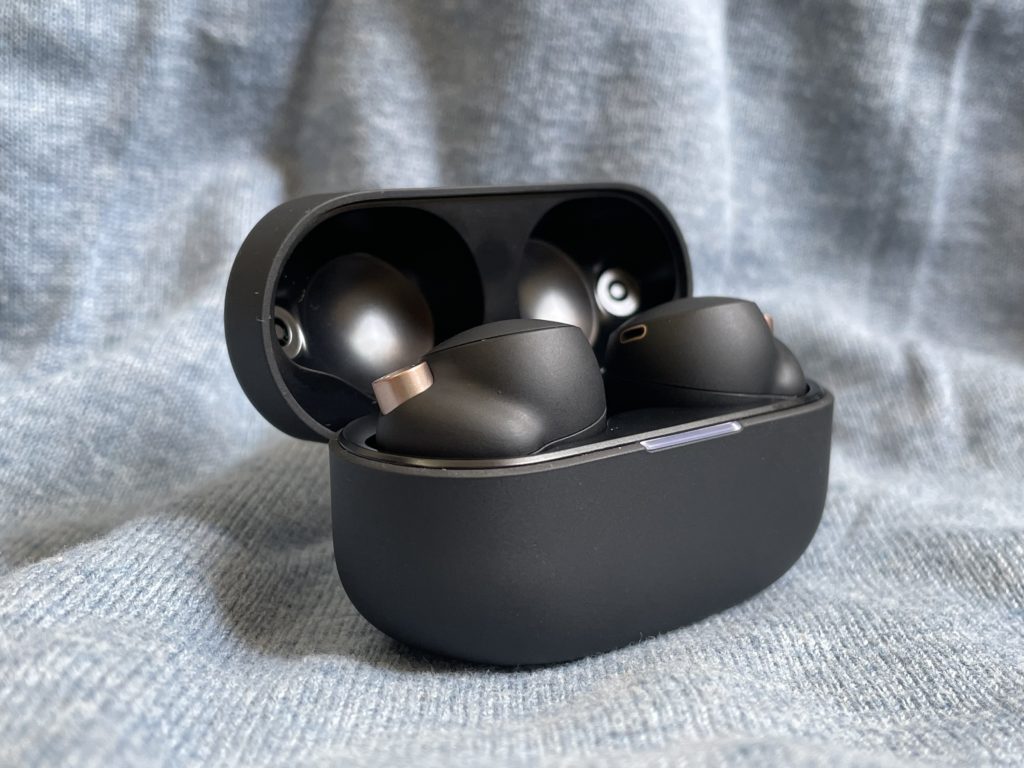 The XM4’s come in two colors – Black and Silver, which is more creamish white. I have the Black color with me, and I absolutely love the matte finish, whether it’s on the case or the earbuds themselves. The matte finish does prevent smudges, but the finish could be a little prone to scratches.

I didn’t spend much time with the XM3’s, but they were quite chunky, and I think that’s one of the reasons I ended up buying AirPods Pro. Thankfully, the XM4’s are much smaller, and the case fits comfortably enough inside the pocket. But it’s still a hard fit inside the coin pocket. And to be honest, XM4’s still bigger than a whole lot of earbuds in the market, and that could be one of the reasons people ditching them for other earbuds. Goodie, they’re rated for IPX4 for water resistance, which means they’re safe from water unless and until you are not diving into the swimming pool. 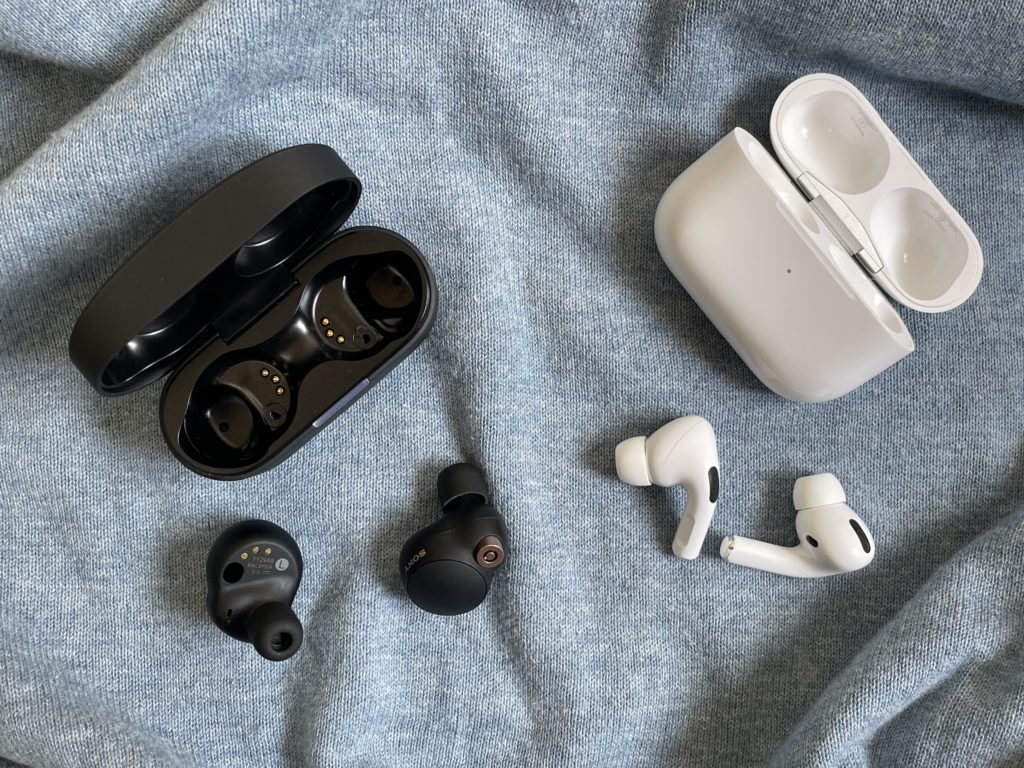 Now moving up to the ears, fitting XM4’s inside the ears could be a hectic task for some, atleast it was for me. Once you are done finding the perfect earti[p size for yourself, the buds snuggly fit inside your ears, thanks to the “unique polyurethane foam material,” and after a while, you won’t even remember they’re inside your ears. However, do note that it could take some time to get used to the size and fit of the XM4’s. Also, the proximity sensor inside the earbuds works like a charm. The music stops playing as soon as you take them out, and it’s on again the moment you wear them.

Since we’re talking about the earbuds, there’s no harm in touching upon the touch controls. Both the buds come with touch-capacitive controls – the right one can be used to play or pause the music, change tracks and take calls while the left one offers Noise cancellation controls, and you can also invoke voice assistant. You can also customize the touch controls based on your preferences. However, I am not a big fan of voice assistants, but I gave it a try and the responses were quick. 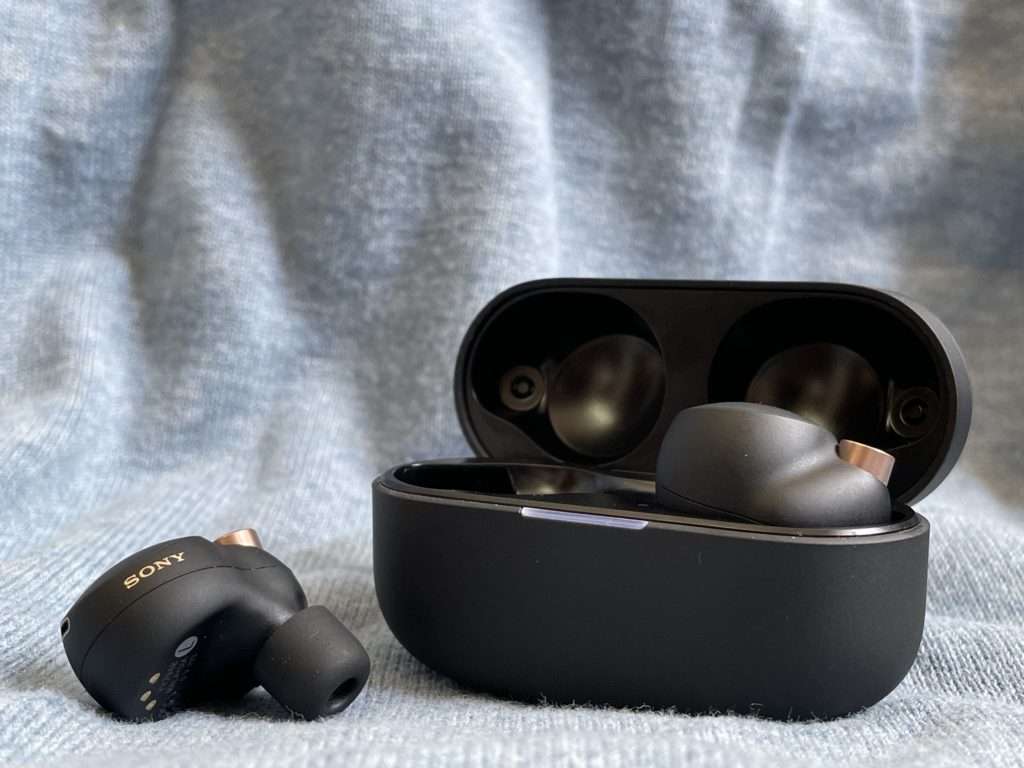 In a line, XM4’s are the best sounding earbuds on the sale right now. The instrument separation is out of the world, and don’t get me started about the vocals; it’s just amazing. The 6mm drivers deliver a balanced sound signature, however, the lows are more detailed than mids or highs. The bass is not as heavy as other Sony audio products, but it adds that extra thump to tracks one would expect, giving life to the songs you are listening to.

In the last one month, I’ve spent most of my time listening to Pasoori, (do listen to it if you haven’t) and a whole lot of Weeknd, AC/DC, Dua Lipa, and lots of Indie pop, and it felt like I was listening to them for the first time even though I wasn’t. Whatever track I played sounded terrific with these earbuds. In a nutshell, there’s nothing out there that can do better than XM4’s in the sound department.

Like its over-the-ear counterpart, the XM4’s support LDAC format. In simple words, that means you can listen to hi-res music without needing a wired earphone. However, LDAC is not available for iPhones, Macs, or even iPads. I mean the whole Apple ecosystem. But, thanks to DSEE Extreme, you can listen to hi-res music even on iPhones, as it tends to improve audio quality using AI algorithms. With the DSEE Extreme on auto, the hi-res tracks on Apple Music sound exhilarating. It’s like Apple Music and XM4’s are made for each other. 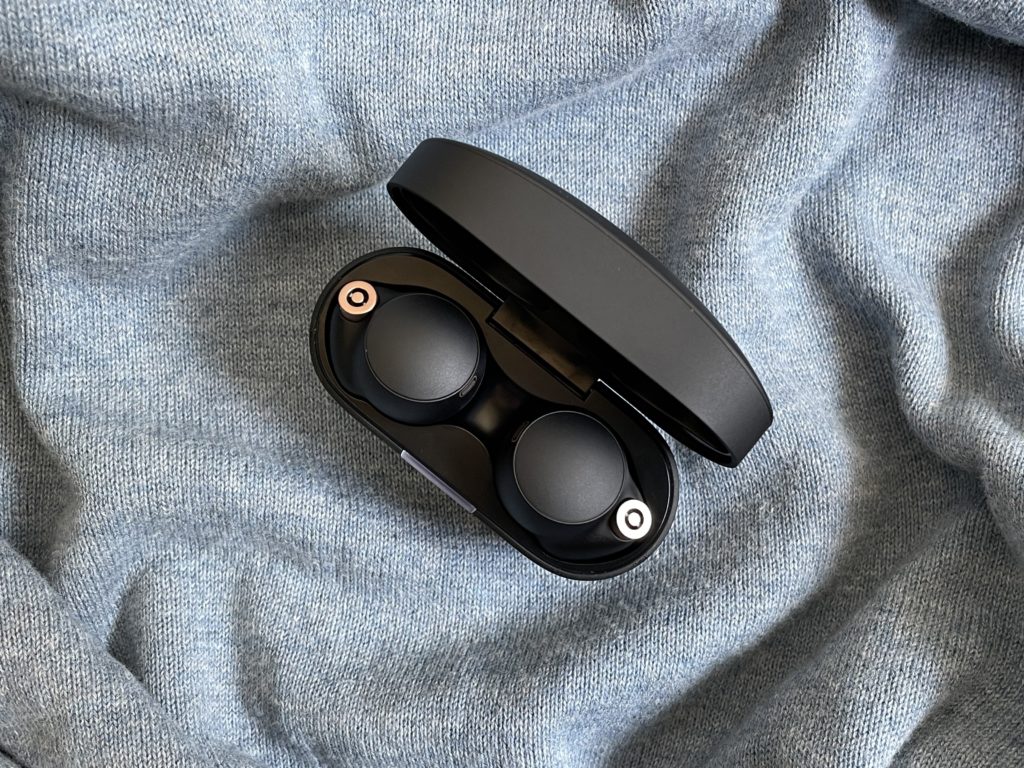 The noise cancellation on XM4’s is so good that you won’t hear a single thing if you are even out there on the road full of blazing cars. PSA: be cautious if you are going on a walk with them. Probably keep them in ambient mode to prevent accidents. I even got a chance to fly with XM4’s, and now I am never boarding a flight without them (only if Sony lets me keep them, or mostly I am going to buy one for myself.)

Like every other ANC earbuds, XM4’s also offer an ambient mode, which works perfectly. The XM4’s come with the Adaptive Sound Control, which automatically switches between noise cancellation and ambient mode depending on movement and location. 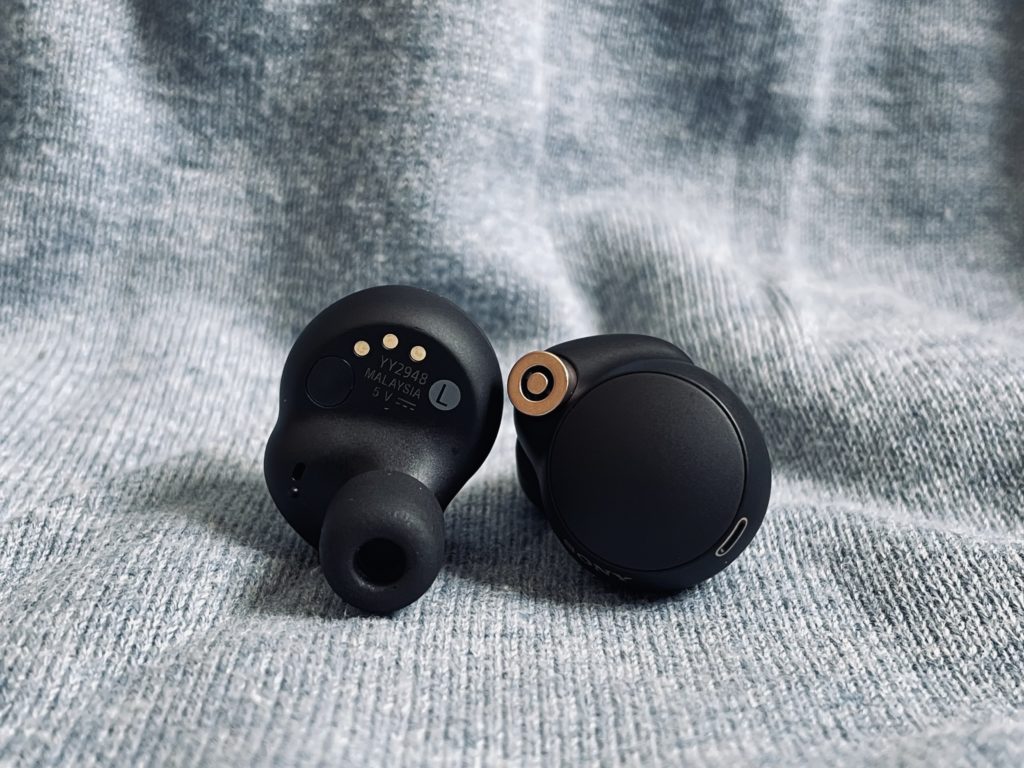 Another feature that I found to be fascinating is Speak to Chat, which pauses the playback whenever you’re talking with someone, focusing on their voice while suppressing the noise around you. The is quite handy but could be a drag if you’ve got a habit of singing along.

Sony promises 8 hours of battery life on XM4’s with ANC enabled, and they deliver on it. During my time with them, I was able to drive them for around 7 or 7.5 hours, with plenty of listening to music, a few podcasts, and many calls. The charging case promises to charge it twice, adding up to 18 hours of promised battery life. Also, if you are in a hurry, then 5 minutes of quick charge would last you around an hour.

The XM4’s are quite strong on the connectivity front as well. The earbuds come with Bluetooth 5.2 and support SBC, AAC, LDAC codecs. The SBC and AAC are some of the common audio codecs used in the industry; meanwhile, LDAC does bring support for hi-res playback, but it’s yet to be completely adopted by the industry. But, it’s nice to know that your earbuds won’t get obsolete whenever Spotify brings the support for hi-res playback. Also, XM4’s comes with support for Google’s Fast Pair, which saves you the hassle of manually pairing them with your phone. But there’s no support for multi-point connectivity, and that’s a big disappointment.

It was my first time using Sony’s companion app, and I had to say I love how simple the name “Headphones” sounds. The app is quite feature-rich, and you get a bunch of options to customize your earbuds and even headphones. The user experience is simple, and everything’s laid in front of your eyes – the battery percentage, settings, and there’s even an activity tab – to check how long you’ve been using your headphones. You can choose different sound profiles, set one for you using the in-app equalizer, or find the perfect fit for yourself using the app. 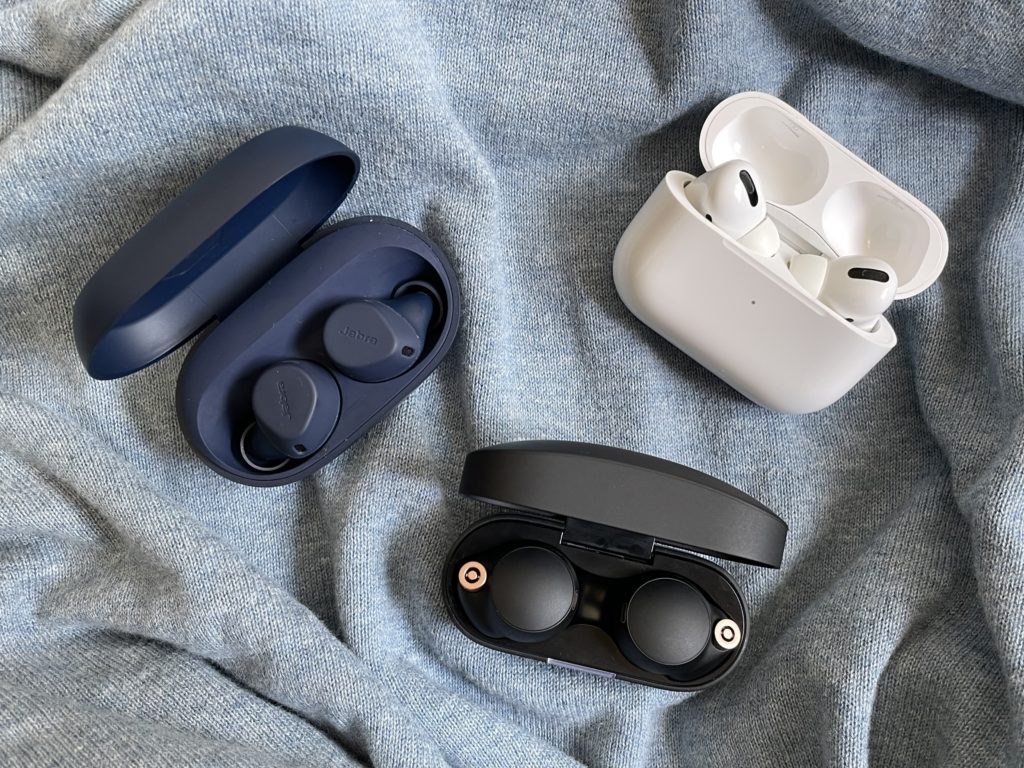 It always comes down to one thing. Are XM4’s worth spending a premium? Absolutely, Yes. There’s literally nothing out there that can match XM4’s sound quality and noise cancellation. The battery life is more than enough, even much better than the competition.

However, they are not for everyone. Yes, XM4’s are great for sound quality, noise cancellation, and battery, but many of them are going to find it hard to fit them inside their ears. I’d recommend you check the fit once if possible before deciding on them. And, if you can fit them inside your ear canal, then it’s the wisest decision to spend your money on them. Otherwise, you can get the AirPods Pro, OnePlus Buds Pro, or the Jabra 85t.