Finding a sleek and stylish Windows machine is not that hard these days, but those sleek and stylish machine comes with their own deprivations, one being not as powerful as the beefy one’s and sometimes you might find your laptop running out of juice much before others. That’s why a huge chunk of the market ends up with a Macbook. Now, that’s not the case anymore, atleast with the AMD powered laptops.

Manufacturers have been turning to AMD’s Ryzen processors for laptops in the last year or two. The Ryzen chips offer tantamount performance as their Intel counterparts. Still, they are way ahead when it comes to power efficiency, and after using the Ryzen 7 5800U powered Zenbook 13 Oled for a few weeks, I don’t see myself picking an Intel-powered machine anytime soon. Also, I want OLED on every laptop now. But is it worth your money? Let’s find out in our full review. 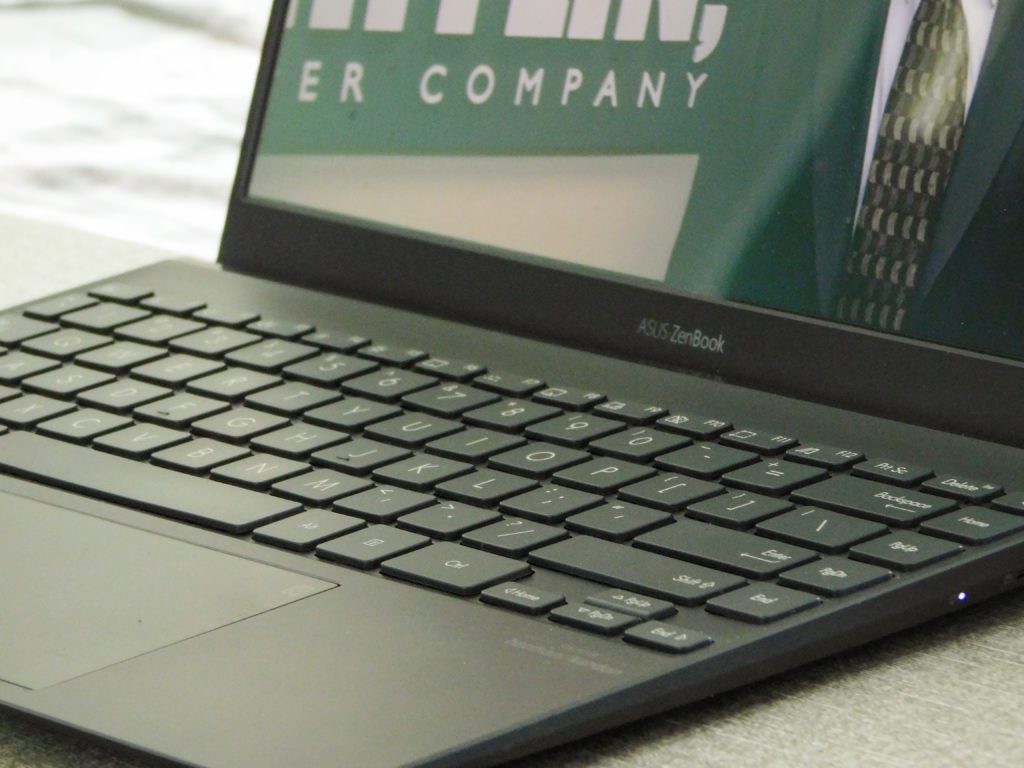 Starting with the design, the ZenBook 13 OLED is one of the best-designed laptops I’ve used ever, and you know what? It’s lighter than Macbook Air weighing just at 1.1Kgs. The craftmanship here needs to be applauded, but some weird things could spoil the fun for you – first, the chassis isn’t as solid as most of its counterparts and second, the lid with the concentric circle pattern is quite prone to scratches. But again, I am very impressed with how thin it is; believe me, I didn’t miss my Macbook Air even for a day. To sum things up, Zenbook 13 OLED holds up pretty well in this department. 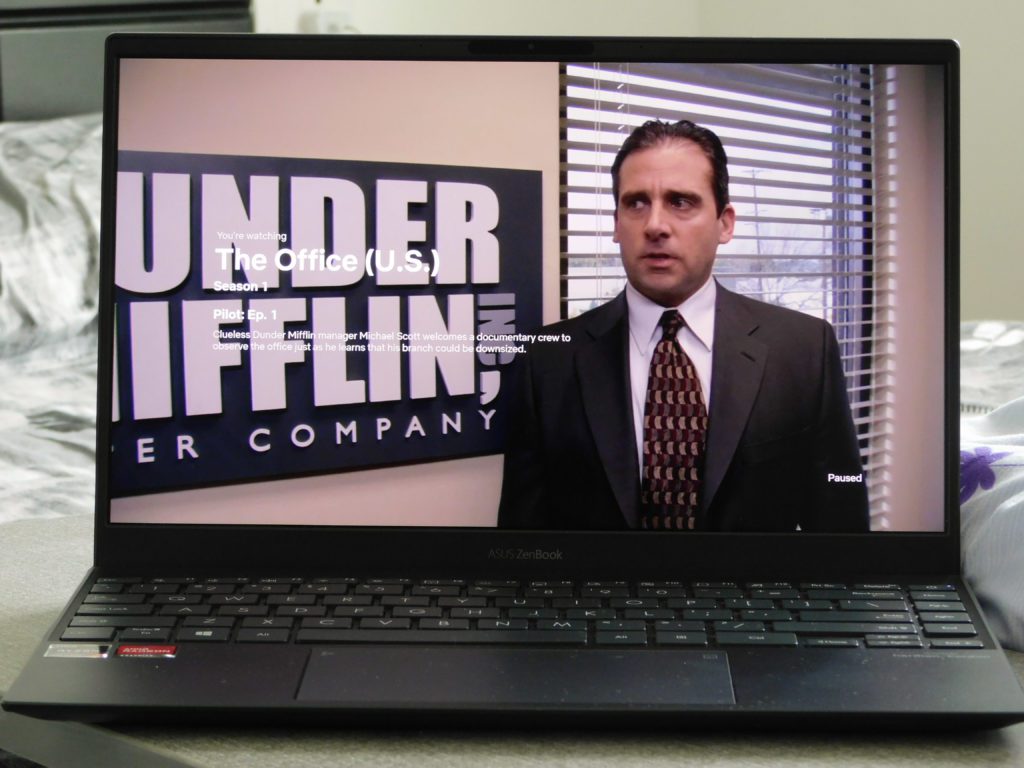 As you would have guessed, the Zenbook 13 OLED comes with an OLED panel, which measures 13-inch diagonally with a screen-to-body ratio of 88%, quite slim bezels, right? At first glance, the display felt slightly oversaturated to me, but after a few hours, my eyes got used to such punchy colours, and then I didn’t want to take my eyes off it.

The OLED panel on Zenbook 13 OLED delivers crisp and raunchy colours while sacrificing the resolution. Sadly, it’s an FHD panel, and sometimes it might bother you, considering you’ve literally burnt a hole in your wallet. Likewise, watching something day or in bright light could be a little annoying for some, as the OLED panel here doesn’t seem to get bright enough to counter the external light.

As for the numbers, I didn’t have the required equipment or tools to check out either the brightness or Asus’ claims of covering 100% DCI-P3 colour gamut, but from what I’ve read, Asus does deliver on its promises, and this display is pure bliss to look at. And there’s support for HDR too. 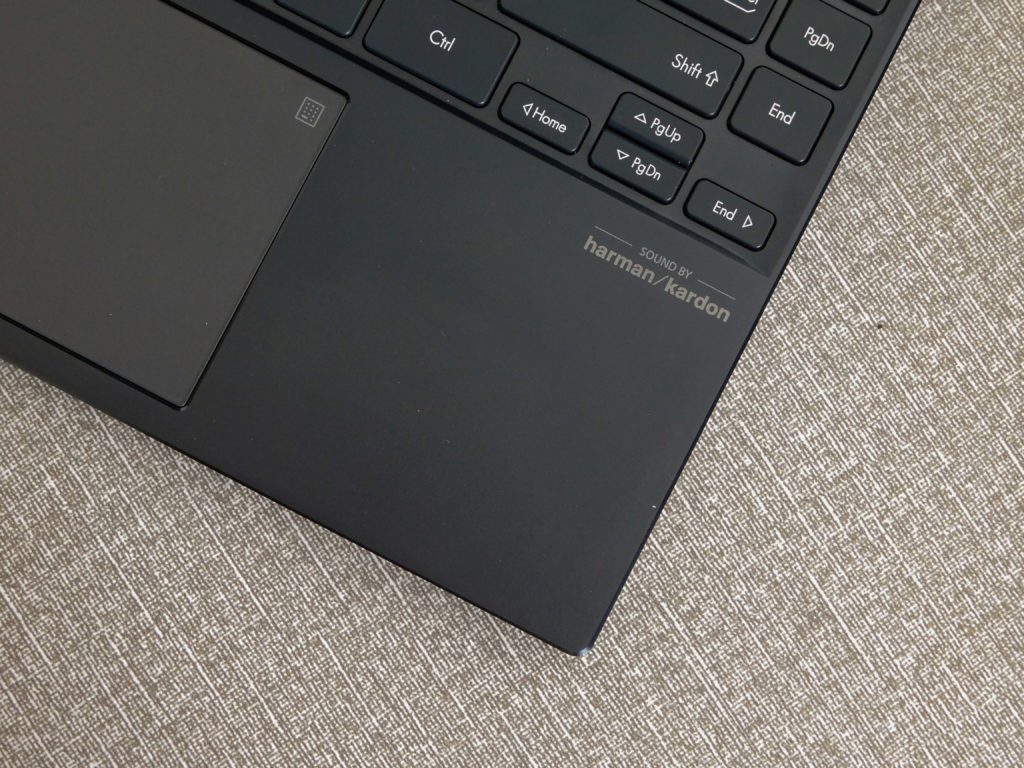 The Harmon Kardon certified speakers here are loud and quite detailed as well. However, they don’t have the best bass or treble, but they are good enough to watch movies or listen to casual music. One more thing, these speakers sound best when the laptop is kept on a flat surface, so refrain from having it on your lap if you want the best sound out of these speakers.

So, it was my first time using a Ryzen powered machine, and I had my expectations, and unsurprisingly, the Ryzen 7 5800U inside stood up to my expectations. For your information, the Ryzen 7 5800U is built on AMD’s latest Zen 3 CPU architecture. With 8 cores and 16 threads, the Ryzen 7 5800 can handle whatever’s thrown at it. The 16GB of LPDDR4X RAM proves to be handly when using Chrome with almost 20 tabs opened, with two of them playing some random videos on YouTube and Geekbench running in the background. Not just Chrome, but the Ryzen processor inside is also capable enough of powering up your rigorous programming or video editing sessions.

As for the numbers, the Zenbook 13 OLED managed to get a single-core score of 1461 and a multi-core score of 6572 on Geekbench. The laptop also ranked pretty well on the Cinebench R23, with 1325 and 7718 in single-core and multi-core tests, respectively. Coming to video transcoding, the Zenbook 13 took around 8 minutes to re-transcode a 4K video into 1080P using Handbrake. 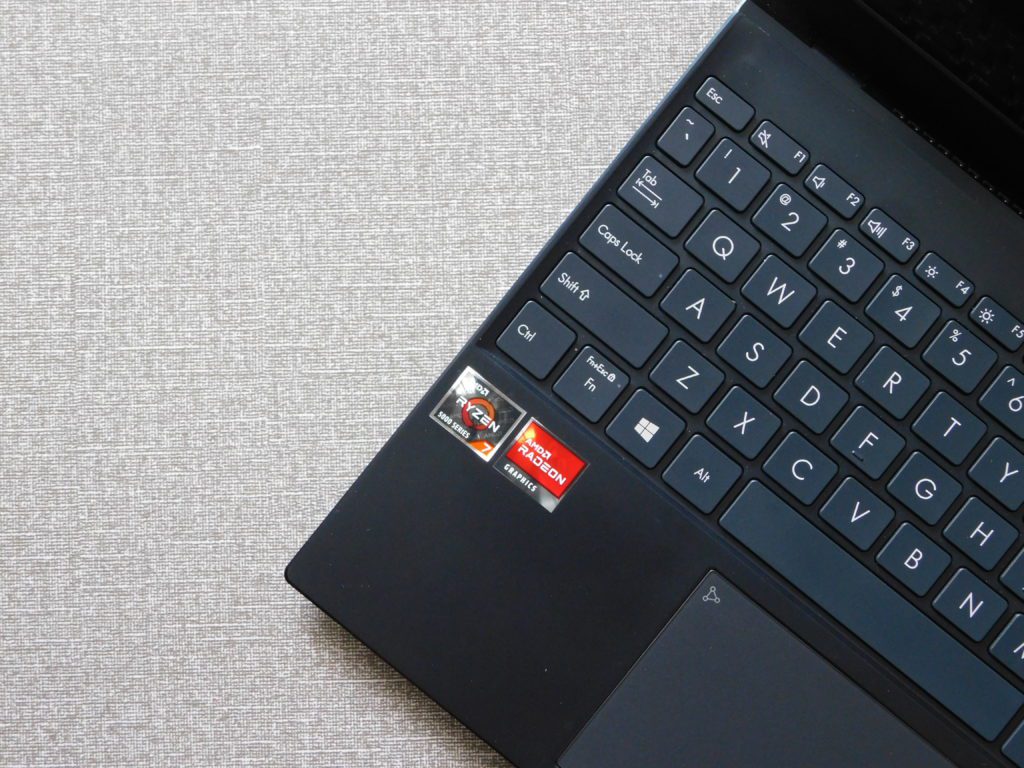 Thanks to the integrated Radeon GPU, the graphics performance on the Zenbook 13 OLED isn’t as spectacular as its CPU. So, it’s a solid no if you are planning to buy it for gaming ( I think you guys are smart enough to deduce that). But, you can for sure play some games from your childhood or your dad’s childhood. For instance, I spent of most my time playing Batman: Arkham Knight, and it was a smooth experience. But, in case you are thinking to install that free copy of GTA V of yours that you grabbed on the Epic Store, then remember to keep the graphics settings at low. And, sorry, I forgot to check fps while gaming because I was busy enjoying the game. 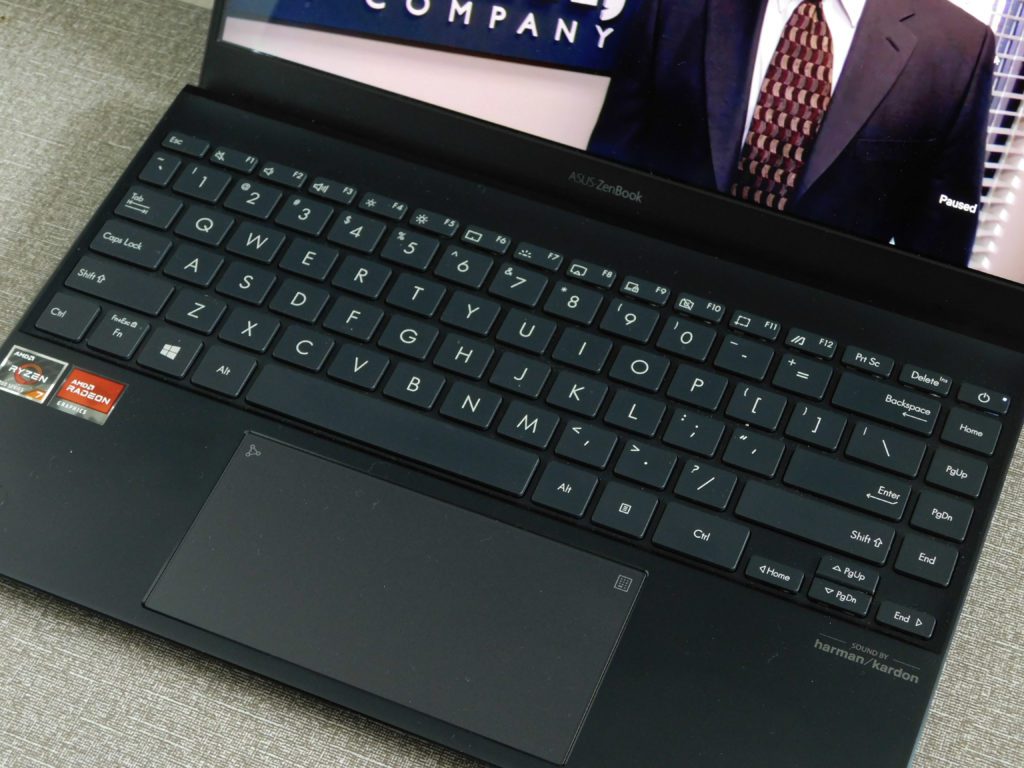 The Zenbook 13 OLED comes with an edge-to-edge keyboard, but NumPad is missing from the scene, which is a little weird. The keyboard has a 1.4mm key travel and offers three-level of white backlighting. The feedback is good enough, but it might take some time to get used to this edge-to-edge key layout. 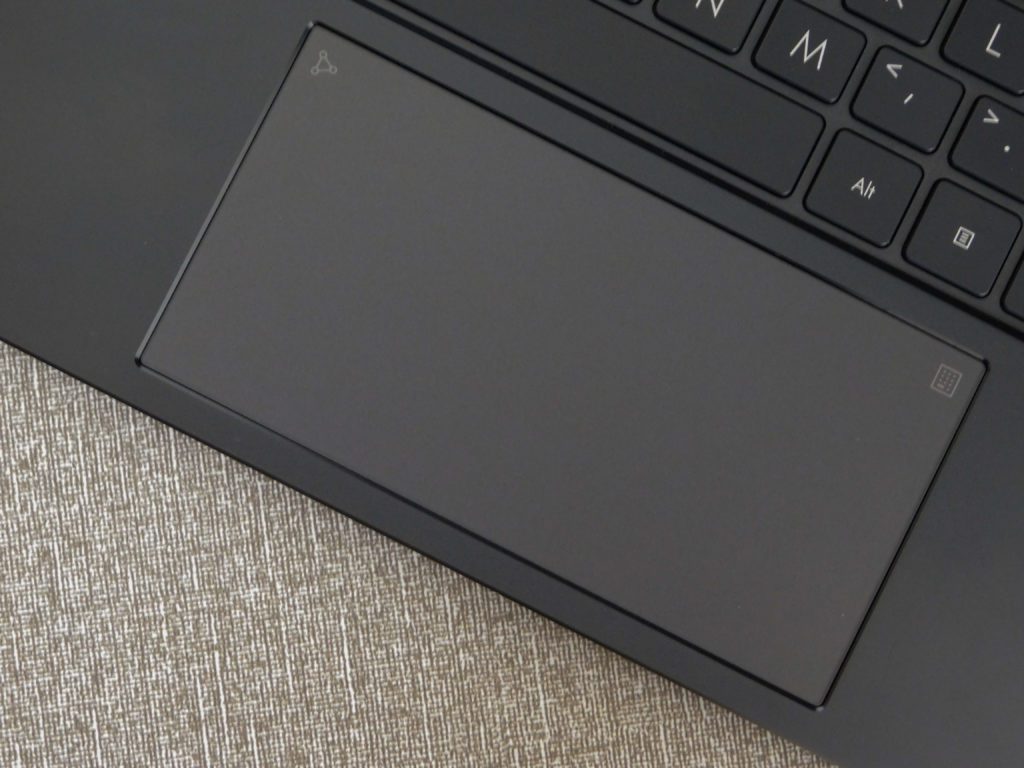 The trackpad here is quite exciting yet quirky. So, the trackpad doubles up as a NumPad, and it sounds quite interesting and a feature you might use daily. But honestly, I used it just once or twice during my 14 day testing period, and I even forgot that it exists. Keeping this weird NumPad aside, the trackpad is exactly what I want from every laptop – big and responsive to clicks.

Battery Life and Charging – Makes You a Free Soul

As said before, AMD has been nailing it in the power efficiency department, and it’s no different in the case of Zenbook 13 OLED. On a normal weekday involving some writing and hours of zoom call at medium brightness, the Zenbook 13 OLED lasted me around 14 hours, leaving other Windows laptops out in the dust.

As far as charging is considered, the Zenbook 13 OLED comes with a 65W charger, and it tops up the battery in about an hour and a half. I plugged it in at around 5% battery, and an hour later, it was 65%, and half an hour later, I plugged it out and went on to work for the whole day.

Everything Else – The Titbits 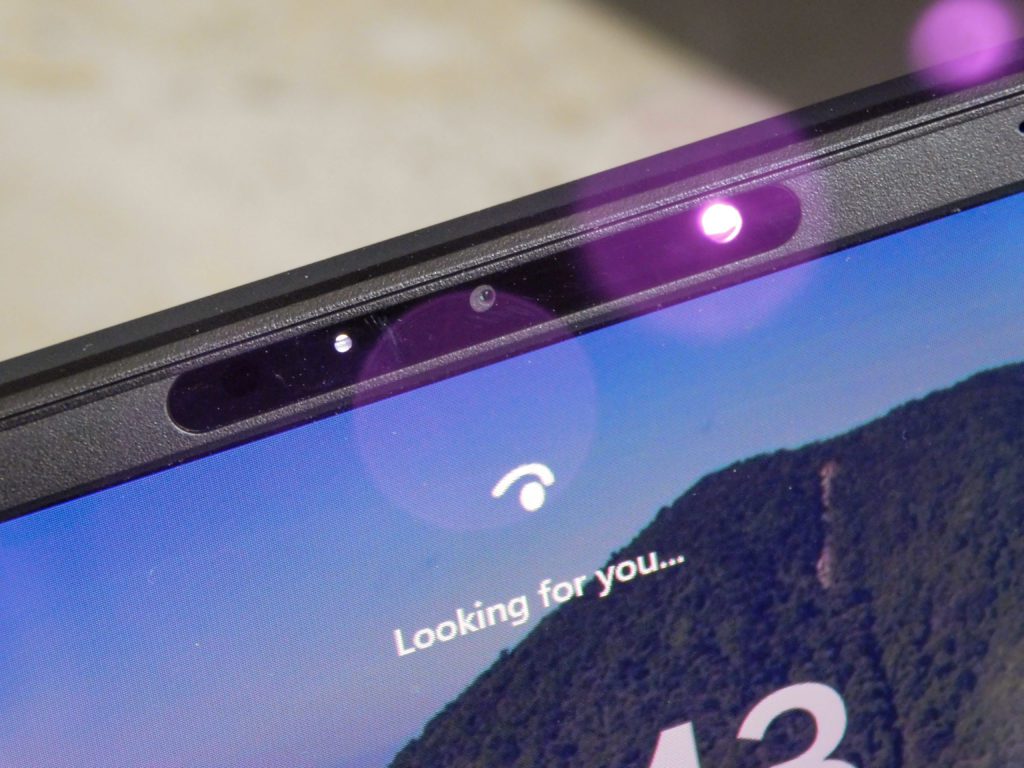 Asus Zenbook 13 OLED Verdict – Shut Up and Take My Money

Asus’ Zenbook 13 OLED is an excellent machine offering the best value for your money, offering a gorgeous FHD OLED panel, dependable performance and impressive battery life. Yes, it doesn’t have the best-in-class speakers or webcam, but if you want a portable and dependable machine for your work with all-day battery life for around Rs 1,00,000, there’s no better option than the Zenbook 13 OLED.