Qualcomm is back with another midrange 5G chipset, the Snapdragon 778G, which sits behind Qualcomm Snapdragon 780G and the whole suite of 8-series chipsets. The new chipset is Qualcomm’s first 6nm chipset, and it succeeds last year’s Snapdragon 768G and 765G. 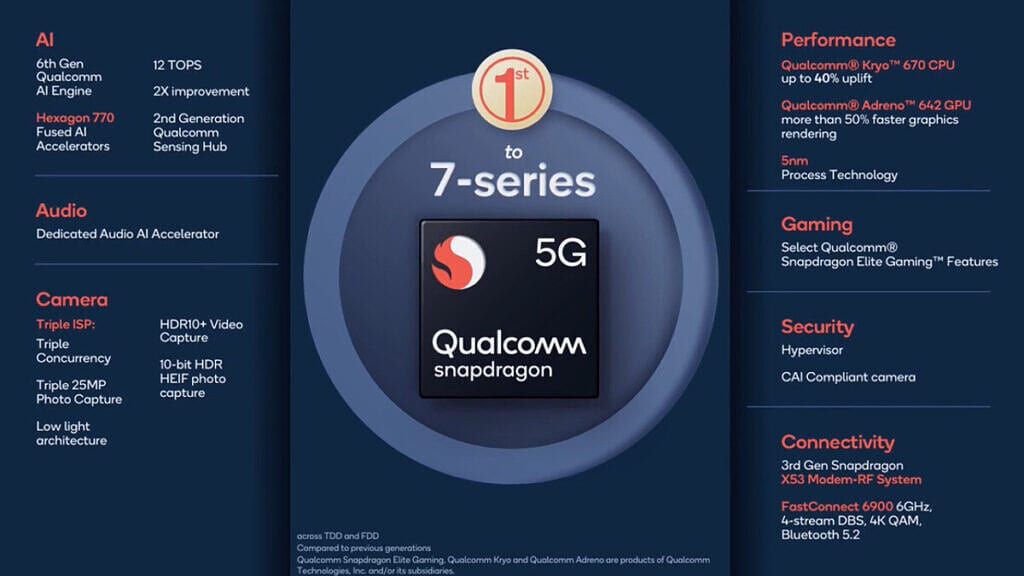 Snapdragon 778G is Qualcomm’s first chipset built on Samsung’s 6nm process node, and it is said to bring up to 40 per cent improvement in term of performance. The octa-core SoC features Kryo 670 CPU, which features A78 and A58 cores in 1+3+4 configuration. The CPU features a prime A78 core is clocked at 2.4 GHz, three A78 cores clocked at 2.2GHz, and four A58 cores running at 1.9 GHz.

The new midrange 5G chipset comes with Adreno 642 GPU, which promises a 40% improvement in graphics rendering. Furthermore, the SoC comes with support for FHD+ displays with support for up to 144Hz refresh rate. In addition, Snapdragon 778G offers some of the Snapdragon Elite Gaming features, such as Variable Rate Shading (VRS) and Qualcomm Game Quick Touch.

Snapdragon 778 comes with an integrated Snapdragon X53 5G modem that supports mmWave and sub-6 5G networks. It Qualcomm FastConnect 6700, which enables support for WiFi 6 speeds at up to 2.9Gbps. In addition, it also comes with the latest 6th generation Qualcomm AI Engine, which features the Hexagon 770 processor.

The Snapdragon 778G 5G chipset will be debuting later this year in midrange smartphones from brands including Honor, iQOO, Motorola, Oppo, Realme, and Xiaomi.