A huge piece of space Junk weighing several tons is currently out of control, and it is expected that parts of it will crash down to Earth this weekend. It is hard to predict where it will land exactly.

On 29th March 2021, The Long March 5B, a variant of China’s largest rocket, launched the Tianhe module – the first module for its space station – from Wenchang. After 492 seconds of flight, Tianhe separated from the core stage of the launcher and entered its planned initial orbit. 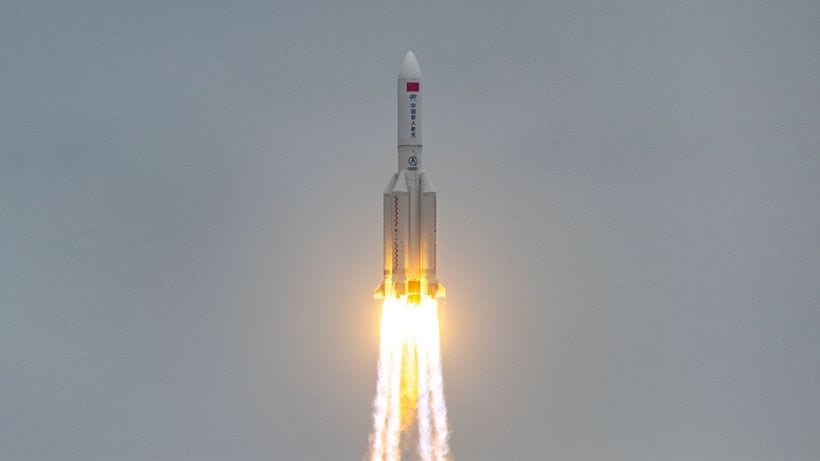 However, this core stage is now also in orbit and this space junk is expected to make an uncontrolled entry back to Earth.

Re-entry of the space junk

As mentioned before, it is not easy to predict where the space junk will land. Due to the high speed, it orbits the Earth every 90 minutes roughly, and hence, just a few minutes change in its landing can lead to a re-entry point thousands of kilometres away. 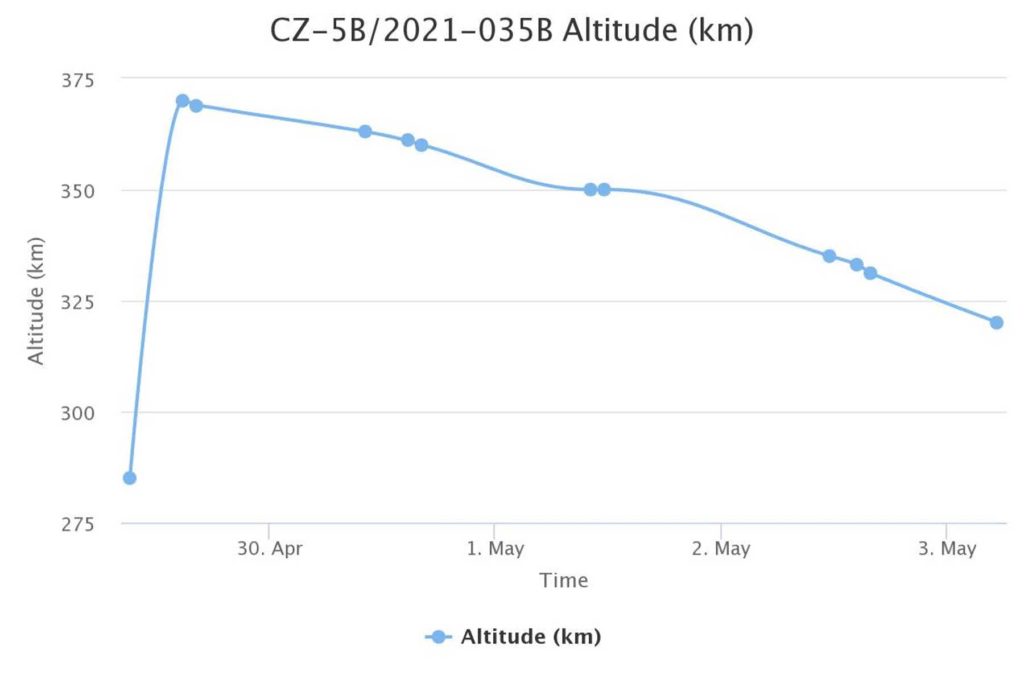 Changing altitude of the Long March 5B rocket now in uncontrolled descent back to Earth. Credit: orbit.ing-now.com

With an inclination of 41.5 degrees, the rocket body passes a little further north than New York, Madrid, and Beijing and as far south as New Zealand, southern Chile, and Wellington and can land anywhere within this area. Most likely, the debris that survives the intense heat will fall into an ocean or an inhabited area, but there is still some risk of it harming people or property.

Jonathan McDowell, a spaceflight observer stated that this is the most massive reentry in decades and the fourth-biggest ever. “The Long March 5B core stage is seven times more massive than the Falcon 9 second stage that caused a lot of press attention a few weeks ago when it reentered above Seattle and dumped a couple of pressure tanks on Washington state.”

Holger Krag, head of the Space Safety Programme Office for the European Space Agency, said that an average amount of mass of about 100 tons re-enters Earth in an uncontrolled way every year. This constitutes around 50-60 individual events per year.

“It is always difficult to assess the amount of surviving mass and number of fragments without knowing the design of the object, but a reasonable “rule-of-thumb” is about 20-40% of the original dry mass.”

Space junk that is composed of heat-resistant materials like stainless steel or titanium can land on the Earth. Surviving objects fall in a vertical fashion after deceleration and travel at terminal velocity.

The most popular and largest incident of space junk uncontrollably re-entering Earth was the re-entry of NASA’s 76-ton Skylab in 1979. Debris were scattered across the Indian Ocean and Western Australia.

If the space junk lands on Earth at night time, it can make for a spectacular viewing similar to that of the Falcon 9 second stage, with no harm caused by the debris, fortunately.

This post first appeared on TechQuila, please read the originial post: here
People also like
California’s 15 Best Hotels with Free Breakfast
French DJ Wax Tailor Is Coming to Toronto - @modo_live @waxtailor @LeesPalaceTO
MIGOS: TAKEOFF SHOT DEAD IN HOUSTON AGE 28.
Writing Holiday Stories: Tricks (and Treats) by Karen S. Wiesner
The Benefits of Hiring a Professional Hand Piler for Your Home
Are Salted Pistachios Good For You?
Best PS5 Games Deals and Offers with massive discounts
A Collection of Many Things on My Mind, Including the Fall of Democracy!
20 Best Pools in Las Vegas
Iran’s ‘women’s revolution’ could be a Berlin Wall moment