Outriders Review – Gears of War, But As an RPG-Looter-Shooter?

What do you get when you combine Gears of War and Destiny? Outriders is the latest looter-shooter that follows a little too close to formula. Or at least that’s what I thought when I started the game, and then that opinion swiftly changed enough to a point where I’m sort of enjoying it, even if just casually.

Outriders sees humanity flee a dying Earth to a new potential home on planet Enoch. As our merry band of heroes land on the new planet, they notice weird anomalies which turn many of the crew either into ashes or gives them unique superpowers. The game then turns the clocks forward by around 30 years, with the player Character finding themselves in the middle of a war between humans and well, aliens.

A little note – I played the game on both PC and a base PS4, with the majority of my endgame spent on the PS4.

The game, developed by Polish studio People Can Fly feels like a fair attempt at getting in on the craze of looter-shooters that have been gobbling up gamers’ attention span over the last few years. It’s not much of a surprise, considering the studio was once under the leadership of Epic Games and helped co-develop Fortnite, arguably the most mass-friendly game in recent history. Outriders goes in a different direction, even with elements lifted from other contemporary looters like Destiny, Warframe or The Division, but it mixes up its core gameplay with some interesting decisions. 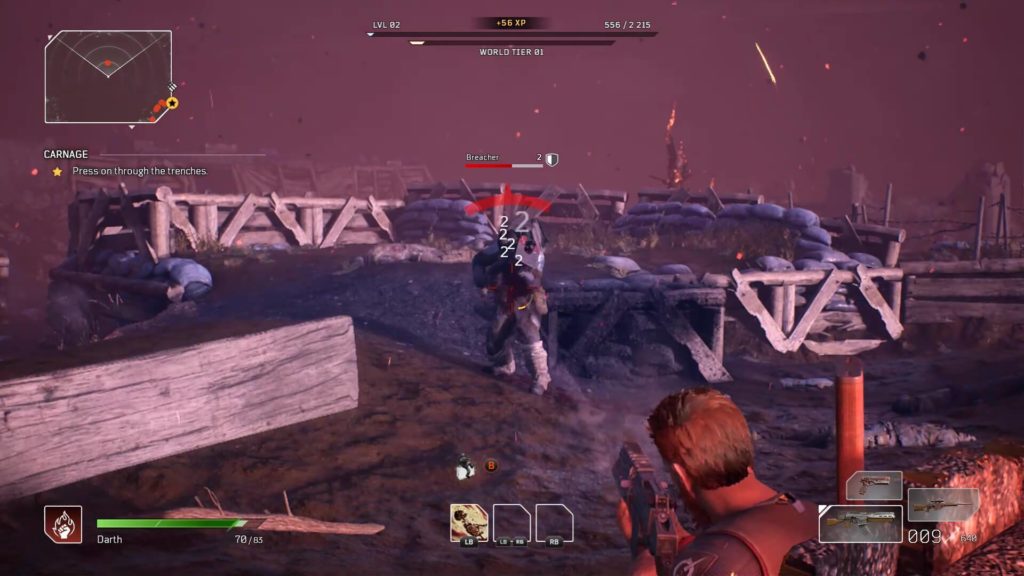 What’s that? Bullet Sponge? Yep, that’s in Outriders, but not as much as you’d think.

Let’s get this out of the way – If none of the looter-shooters out there on the market has done it for you, then Outriders won’t do much either. It feels quite derivative but has a few cards up its sleeve to distinguish itself from its peers. For starters, the game feels more welcoming to singular players instead of focusing all of its mechanics on a co-op/party system. Yes, you can invite your friends to form a roster, but Outriders’ story really feels like it’s a job for one man, or woman.

There’s a heavy focus on storytelling, complete with cinematic cutscenes, but its presentation is a little too generic for my taste. ‘We landed on an alien planet and weird stuff is happening’ – how many times have you seen that story play out in games or films?

The inclusion of dialogue choices is a strange one, which doesn’t really affect the story. It’s akin to the dialogue system from games like Horizon Zero Dawn, where it primarily exists to give players the option to get more backstory from characters. That said, the characters here have nothing on Aloy or Ros from HZD, and I can only describe them as ‘generic’, which is something that goes for pretty much everything in this game.

Gameplay – Back To Basics 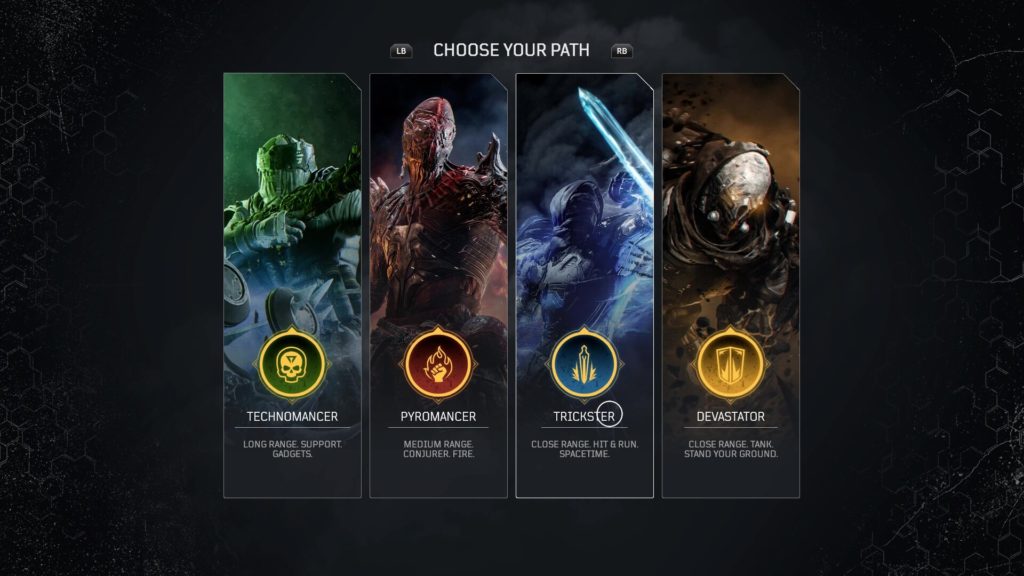 There are 4 classes in Outriders 0 Technomancer, Pyromancer, Trickster and Devastator. They do exactly what they sound like, similar to class-based systems from other looter-shooters. Each has different special abilities, separated by cooldown meters, and pretty much all of them reward aggressive gameplay styles.

My PC playthrough was with the Pyromancer class, while I chose the Trickster on PS4. The former is a medium-range character class, with the latter being focused on close-range combat. While the game looks like it focuses a lot on cover-based combat, it really doesn’t feel like it once you’ve gone through the initial hours.

Outriders favour aggressive playstyle, with enemies being consistently on top of you, forcing you to use your powers and move around a lot. I like the fact that the health bar is linked to the types of kills I can get, so using abilities is a frequently big part of combat. The types of guns available are par for the course, with the usual range of assault rifles, shotguns and sniper rifles. 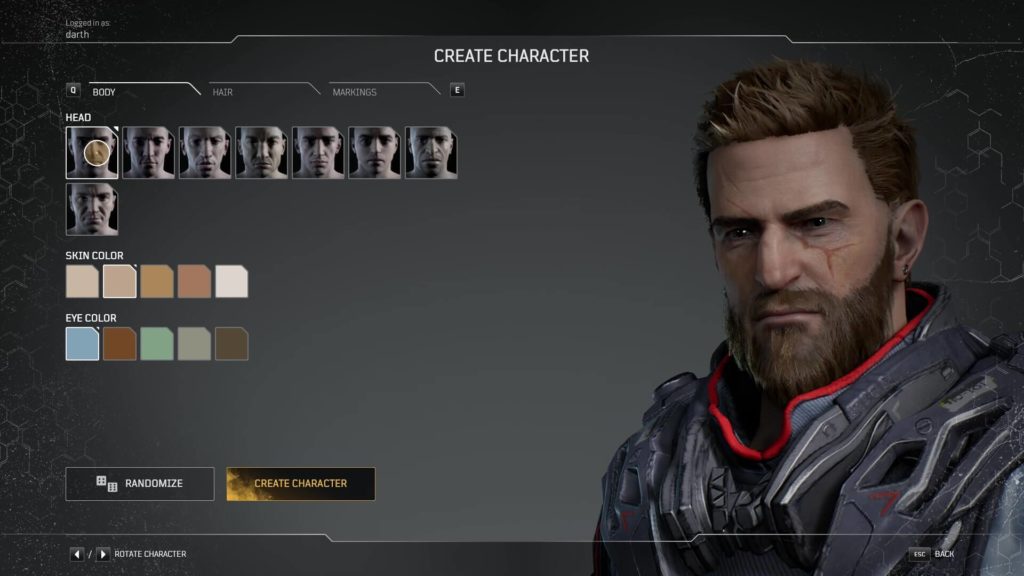 The character creator is basic, but at least you can change your appearance, bar body type, any time you want. I would’ve preferred a wider variety of physiques to select from, and the current roster looks quite close to something from Gears of War, without the body proportions being cartoonishly large. 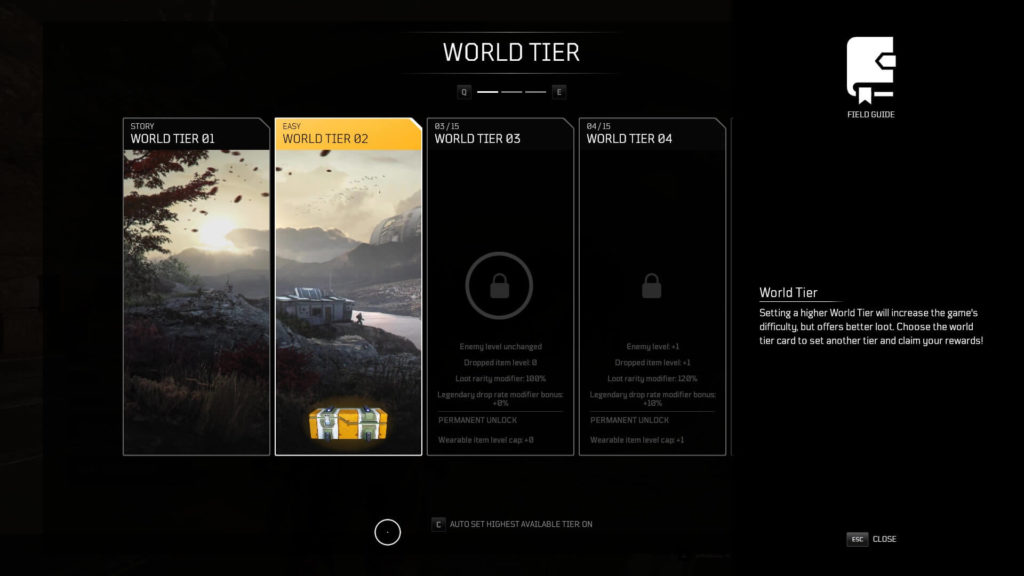 The ‘world tier’ levelling system gets the job done, providing better loot and harder enemies to beat, if you set it to auto select the highest tier. This is the closest to a difficulty settings menu that you can find in the game, and you can change it on the fly.

Considering Outriders is a cross-gen game, I didn’t expect much from its visuals. It looks perfectly fine on any platform. The character and environment designs are perfectly serviceable, and with so much happening on the battlefield, your screen can get a little messy every so often.

Performance on PC is really good, partly thanks to the inclusion of NVIDIA DLSS. If you’ve got an RTX graphics card, then you won’t have to worry about performance at all. If you have something older, even then you probably won’t get too much issue. I played the game on my PC with an AMD Ryzen 7 3700X and a RTX 2060 Super, paired with 32 GB of RAM. While the game did slow down to slightly below 60 FPS in heavy areas like the crowded main hub, it was perfectly fine during intense combat sequences.

Playing #Outriders on a last-gen console is a PAIN. I played about 7 hours on PC, now got started on PS4 and man, 30 FPS and constant loading ssuuuuuuuuuuuucks

But I love how the monster just floats on air like a BOSS- pic.twitter.com/xjJ5Z7EAru

Performance on PS4 though is a little rocky. The game targets 30 FPS on the last-gen consoles, and after experiencing the game on PC, my experience on the console was tainted. Add in texture pop-in and constant need for loading before almost any cutscene, and it’s clear that this game needs to be played on better hardware.

Under different circumstances, I would recommend players wait a while until the game goes on sale. However, with the game now available on Xbox Game Pass (for console), I think Xbox gamers can go ahead and enjoy the game to their heart’s desire. After all, what have you got to lose? Well, $60/Rs. 3999 if you plan on playing on a PlayStation console, and slightly less on PC. While the game is serviceable, with decent gameplay mechanics, I don’t see it being a Destiny-killer just yet. The good thing is, the developers don’t either, as it really kind of stands in the grey area between a single-player RPG shooter and a co-op online looter.

Outriders Review – Gears of War, But As an RPG-Looter-Shooter?