When it comes to Windows laptops, Intel has been dominating the space for a long while. With AMD’s recent wins in the desktop space with their Ryzen CPUs, it stands to reason that laptop manufacturers would take notice, and they have. Starting last year, we began to see a rise in the number of AMD Ryzen powered laptops, and after using one for a few weeks, I can say that laptop users need not worry about lagging behind in performance any more.

The Lenovo Ideapad Slim 7 is an ultrabook with an 8 core AMD Ryzen 7 4800U processor, which is built on the Zen 2 architecture. Essentially, this laptop packs almost the same punch that my 2019-built PC does with its Ryzen 7 3700X. 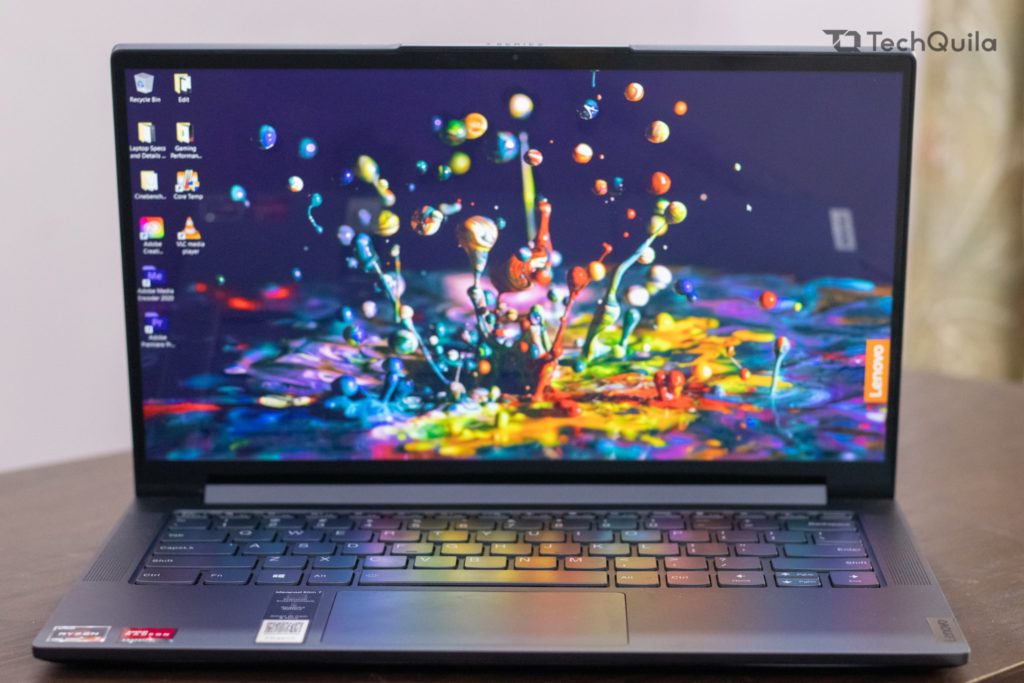 Starting off with the build quality, it’s always a little hard to resist the temptation to compare Windows laptops with Macbooks. I’m currently using a 2020 Macbook Air, and the Lenovo Ideapad Slim 7 in comparison doesn’t stand up to it, but it comes close. In the land of Windows laptops, the slim 7 is built with competence, with a design that won’t turn heads but function just as it should.

The keyboard follows the same trend of not being fancy but has good key-travel and a tactile clicky-ness which wouldn’t turn me off from writing on it. About half of this review was written using the laptop’s keyboard, a third on my Macbook Air and the rest on my desktop’s mechanical keyboard. In that lineup, I’d put the Lenovo laptop’s keyboard last. The touchpad was also a little hard to settle into after using the one on the Macbook, although that might be a little unfair. I would have preferred a larger touchpad, which ideally would be less hard to click on, and that’s something that every Windows laptop should take note of.

The 1080p IPS SDR display here is a standard affair, capping out at around 300 nits, which is bright enough for the office but not for the cafe outside. Compared to the cheapest Macbook, the display on the Ideapad Slim 7 seriously lags behind. While I don’t much care for having anything above a 1080p display stretched across 14 inches, I’d really appreciate a much brighter display. Coming to the colours, it seems to lean a little more towards the oversaturated/contrast-y look which I think looks generally fine on most occasions.

The speakers here get the job done, with a sharp focus on vocals over music. It could certainly be louder and cover a wider range of sounds, but it’s perfectly serviceable.

If I had one real complaint regarding the same, that would be that it’s quite hard to open the lid one-handed. The laptop is offered as an ‘Ultrabook’ (thin-and-light), yet opening up the lid reminded me of bulky gaming laptops. 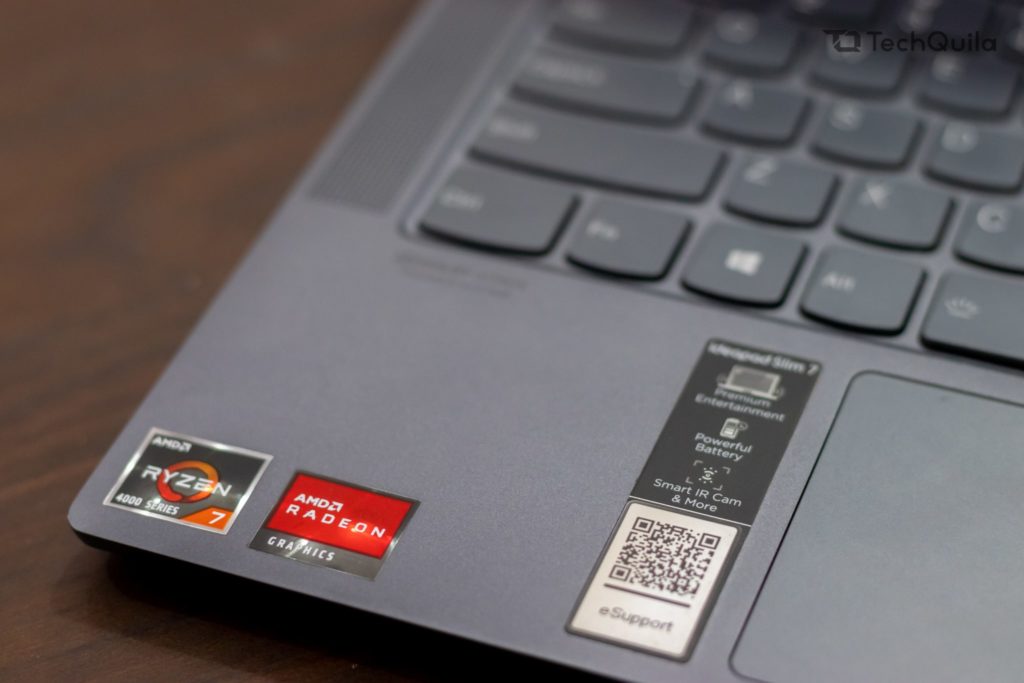 Once you do open up the lid the display greets you with Windows Hello login, using the in-built 720p webcam with IR. I must confess I’ve never actually used a laptop with Windows Hello, and having used one with it I’ll probably never go back to one without it. The login experience is smooth and fast, and that feeling continues in almost every other aspect of using the laptop. 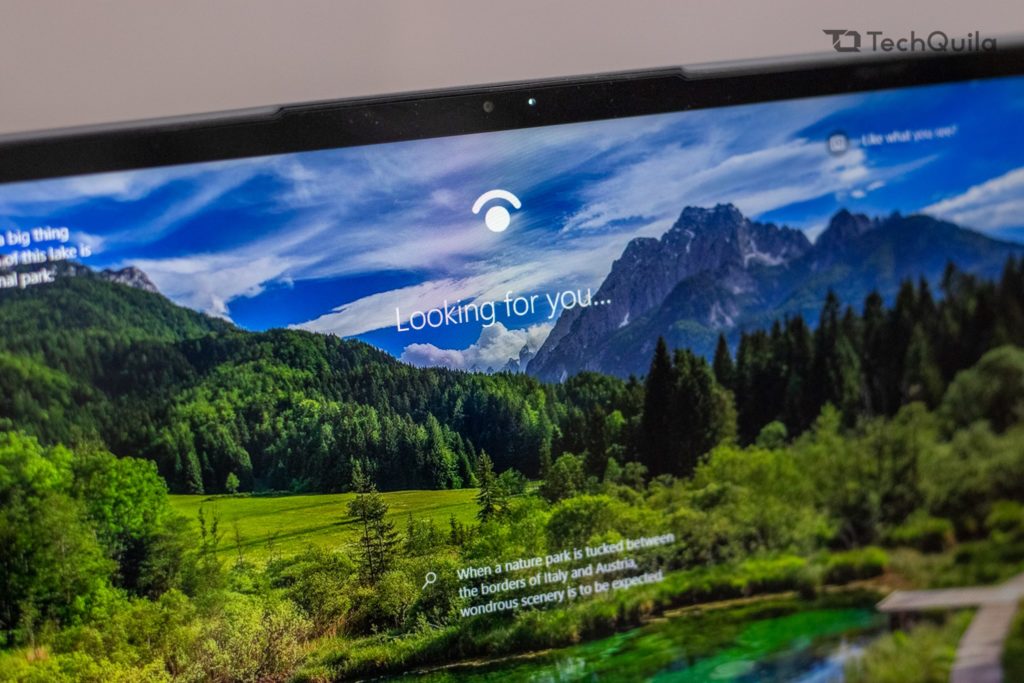 The laptop comes with AMD’s Ryzen 7 4800U, built on the same Zen 2 greatness that team red dominated the desktop space with in the last couple of years. 8 cores and 16 threads are mighty enough for any laptop owner, and some of it is actually wasted on a laptop where you probably won’t do any actual production work or gaming on. However, since it does have the power, at least you have an option to work on in times of need. The chip’s base clock is a little on the lower side at 1.8 GHz, but that’s expected as it is a U-series chip after all, which is built for efficiency. The 4.2 GHz boost clock is a little ambitious for itself, which it almost never touched during single-core workloads.

I’d often see the chip shoot up to the neighbourhood of 3.5 GHz during bursty-loads, like opening up heavy applications. That made the experience relatively snappy, but nowhere near its desktop counterparts. However, the fact that it even comes anywhere close with its 15W power draw is almost a miracle. The integrated Radeon graphics is sufficient for content creators on the go. While an actual dedicated GPU would have been nice, that would also almost completely change the target market for the laptop, and no doubt make it more power-hungry while at it.

The memory configuration of fast 16 GB (dual-channel) at 4266 helps a lot with navigating through the occasional jank.

The powerful processors stretched its legs during content creation fairly well, and the extra threads come in quite handy. For video editing, I threw in a 5 minute 4K H.264 file into Adobe Premiere Pro for re-transcoding, with a new colour grade added on top. I did the same on my desktop PC, and here are the results:

The laptop’s thermal performance held back the otherwise powerful mobile chip, which you can see from the CPU encode results. I wouldn’t necessarily use that as a knock against AMD’s design of the CPU itself, as comparing it to a desktop with water-cooling is a little unfair. The Ryzen 7 4800U would settle around 2.45 GHz on all cores, while the desktop 3700X would stay just under 4 GHz. 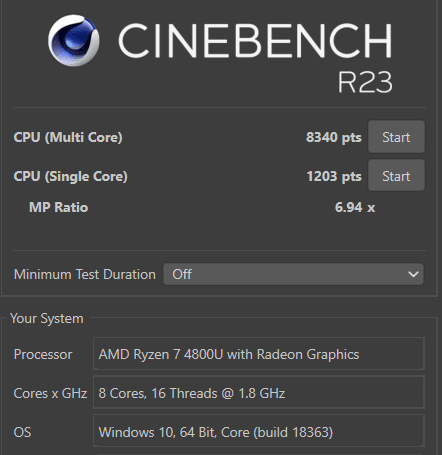 In Cinebench, you can see the single-core performance coming really close to the 3700X, which matters more in a laptop. After all, there won’t be many instances where you’ll be running the CPU at a 100% load, and even then you’ll have the option to use GPU encoding.

While integrated graphics have improved a lot over the years, they’re still not on the level where you could use them for comfortable AAA gaming. The same goes for the Radeon graphics present here (all 512 MB of it), which isn’t a negative really. You can make use of it for content creation fairly well, but don’t expect the thin and light laptop gaming revolution is here.

Lenovo’s Ideapad (Yoga) Slim 7 is a good Windows laptop, and it gets more things right than it doesn’t. It packs a powerful, almost desktop-class processor, and a decent build quality and a less-than-stellar display. More than anything, it’s proof that going forward, we might see laptops without any compromises in the power department to go against budget PCs.