A minuscule chameleon was found in Northern Madagascar by a team of international scientists and is believed to be the smallest Reptile on Earth. The research was published in the journal Scientific Reports on 29th January 2021.

Have you ever made love in front of o…
Men's Winter Slippers Warm Indoor And…
Anxiety symptoms in men
Muslim American servant NARRATOR
Fiction Series So Big, They Cross Mul…

The chameleon discovered by the team is called Brookesia nana (B.nana). It is very tiny. An adult Male of this Species has a length less than an inch (13.5 millimetres), including its tail. It is considered to be among the smallest of all 11,500 known reptile species. Females are a tad bit larger than the males. They measure three-quarters of an inch from vent to snout.

The scientists couldn’t find more than two specimens of this extremely small reptile. The species generally have a very small habitat spanning only a few kilometres. 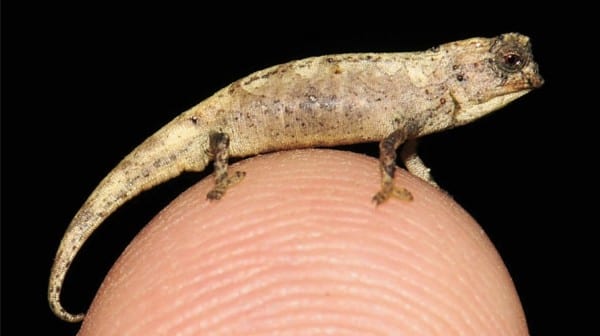 Adult male Brookesia nana that only measures less than an inch including its tail. Screenshot from Scientific Reports/ Extreme miniaturization of a new amniote vertebrate and insights into the evolution of genital size in chameleons by F. Glaw et al.

The chameleon was discovered during a German-Madagascar expedition in the northern part of the country. One interesting observation is that in spite of the small size of the reptile, they have huge hemipenes (genitals), which is equal to 18.5% of their body size. Frank Glaw, co-author of the research pointed out that small chameleon species usually have the largest genitals in proportion to their body size when compared to 51 chameleon species.

The explanation for this could be the difference in the size between males and females of this reptile species. Female Brookesia nana is larger than the males, measuring 19 millimetres. B.nana may be tiny, but its genitals need to keep up with reproductive expectations and necessities.

In a Bavarian Natural History Collections press release, Miguel Vences of the Technical University of Braunschweig and study co-author said, “The extremely miniaturized males of the small species need relatively larger genitals in order to successfully mate with the larger females.”

Mark Scherz, co-author of the study said that unlike the bigger lizards in the family, these species do not have much capacity for changing colour.

The island rule could help explain why these chameleons are so tiny. According to this rule, animals who live in isolation or on an island sometimes grow larger or smaller than their non-isolated relatives if it benefits them in their survival.

But the researchers explained that the island rule does not apply to many lizards. B. nana’s habitat may not have affected its size, and other factors could have led to this.

The researchers also said that B. nana’s habitat is under a threat due to the rampant deforestation in Madagascar. In the name of economic development, the habitat of many species could be destroyed. Fortunately, it has been declared a protected area. This will hopefully protect the habitat of the world’s smallest reptile.