Glaciers Found on Mars Gives Insight into its History

An analysis of the Glaciers found on Mars revealed to the astronauts that the planet went through 6 to 20 ice ages in the past 300 to 800 million years. 20,000 years ago, during the ice age on Earth, our entire planet was covered in glaciers. These then retreated to the poles. As they moved to the North and South Poles, these huge masses of ice left rock evidence and carving of paths.

Unlike our planet, Martian glaciers never left. For over 300 million years, they remained frozen on the surface of Mars, with an estimated average temperature of minus 81 degrees Fahrenheit. They were found only recently since they were covered in debris.

In a statement with CNN, Joe Levy, the author of the study and a planetary geologist at Colgate University, says, “All the rocks and sand carried on that ice have remained on the surface. It’s like putting the ice in a cooler under all those sediments.” The study was published in the journal Proceedings of the National Academies of Sciences. It states that glacial landforms are widespread on Mars.

Glaciers on Mars have been a mystery to geologists and researchers. They have been trying to determine whether the glacial formations were caused by an extended Martian ice age or if they were formed as a result of multiple ice ages spanning millions of years.

By studying the sediments, scientists can find their answers.

After examining the rock formations, Levy came to the conclusion that the discovery of rocks shifting from larger to smaller clumps downhill points to a single ice age, since rocks erode with time. 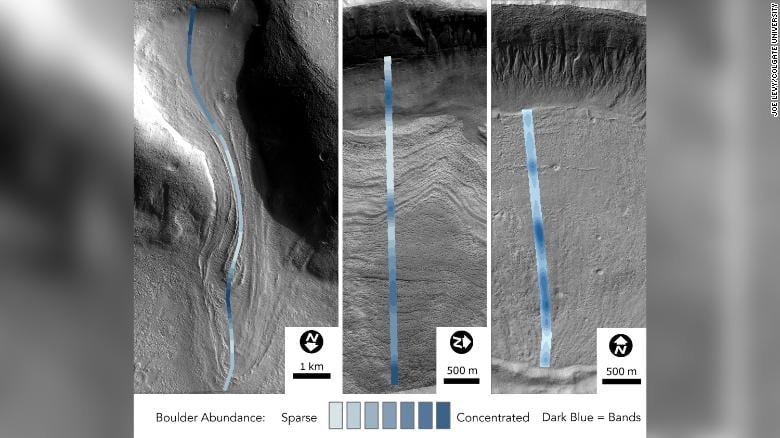 This image shows the abundance of boulders that can be found in glaciers on Mars.

As we cant study the surface of Mars firsthand yet, scientists studied 45 images of glaciers from NASA’s Mars Reconnaissance Orbiter.

The high-resolution images allowed the researchers to count and estimate the size of the rocks. Levy said that the magnification of the orbiter images let the team “see things the size of a dinner table” on the Martian surface. They measured 60,000 rocks in total. If they had used Artificial Intelligence for this process, their work would have decreased, but it would not have been able to differentiate rocks from glacial surfaces. 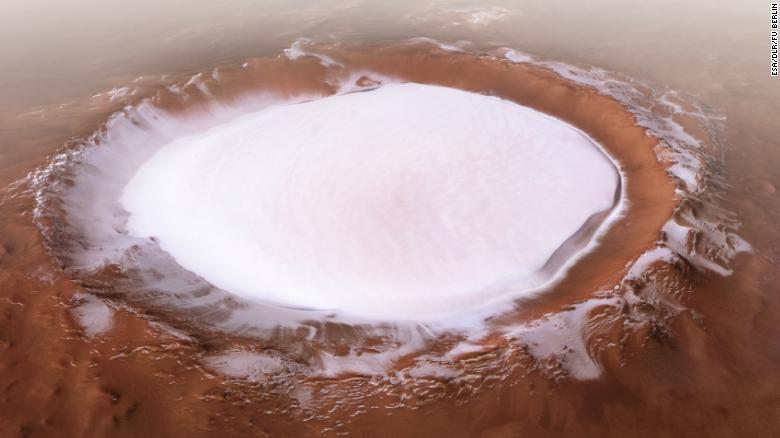 Ice can be found in multiple places on the cold planet. The European Space Agency’s Mars Express mission captured this image of the Korolev crater, more than 50 miles across and filled with water ice, near the north pole.

“We did a kind of virtual field work, walking up and down these glaciers and mapping the boulders,” Levy said.

The scientists observed unexpected randomness, rather an organized arrangement of rocks with different sizes. Levy explained, “In fact, the boulders were telling us a different story. It wasn’t their size that mattered; it was how they were clustered.”

The research discovered that the rocks were travelling inside the Martian Glaciers, rather than on the surface, which explains why they didn’t erode. However, the rocks could be seen in rings of debris on the glacial surface. These rings pointed to distinct ice flows formed during the different ice ages.

The study explains the climate of Mars and how it changed throughout its life.

“This paper is the first geological evidence of what Martian orbit and obliquity might have been doing for hundreds of millions of years,” Levy said. “These glaciers are little time capsules, capturing snapshots of what was blowing around in the Martian atmosphere. Now we know that we have access to hundreds of millions of years of Martian history without having to drill down deep through the crust — we can just take a hike along the surface.”

The glaciers could also include evidence of life that may have existed on Mars. Levy said, “If there are any biomarkers blowing around, those are going to be trapped in the ice too.”

The researchers will continue to study Martian Glacial formations to learn more about the planet’s history. “There’s a lot of work to be done figuring out the details of Martian climate history, including when and where it was warm enough and wet enough for there to be brines and liquid water,” Levy said.

Glaciers Found on Mars Gives Insight into its History