To attract mates amidst noise, these frogs wave their arms and legs

A species of Ecuadorian Glass Frog adapts itself to the noisy environment by using high frequency croaking and visual signaling – hand waving, foot waving and head bobbing – to Attract Mates. Usually, frogs use their croaks to attract mates, but in certain noisy environments such as near waterfalls, this isn’t enough. Hence, some species have evolved to use a new technique: long distance visual displays.

Best Home Sauna To Stay Warm All Wint…
Discover the Magic of Venice in Novem…
Editorial: The Rock And Roll Hall Of …
Easy Pet Rocks Craft Idea For Kids
Attracting Healthcare Talent in the P…

The first known instance of this two fold strategy to attract mates in the glass frog family has been reported in a new research. The research specifically mentions Sachatamia orejuela, a species native to Ecuador and Columbia. The behavior has also been observed in frogs living in other regions like India, Brazil and Borneo.

Rebecca Brunner is a Ph.D. student at UC Berkeley and the first author of the new paper. She explained, “A handful of other frog species around the world use visual signaling, in addition to high-pitched calls, to communicate in really loud environments. What’s interesting is that these species are not closely related to each other, which means that these behaviors likely evolved independently, but in response to similar environments — a concept called convergent evolution.”

Sachatamia orejuela glass frogs are native to the rainforests of Colombia and Ecuador. They are almost exclusively found on rocks and boulders near waterfalls. The rushing water and slippery surface offers them some protection against predators. Their green gray color and semi transparent skin help them to camouflage and make them impossible to spot. Hence, very little information is available about how the glass frog attract mates.

Brunner studies the bioacoustics of different ecological environments. When she was deep inside an Ecuadorean rainforest stream recording the  call of a Sachatamia orejuela, she observed for the first time the visual signaling behavior to attract mates. She climbed up a slippery rock face to record this sight balancing herself on one foot.

She recounts, “I was already over the moon because I had finally found a calling male after months of searching. Before our publication, there was no official record of this species’ call, and basic information like that is really important for conservation. But then I saw it start doing these little waves, and I knew that I was observing something even more special.”

While she was filming, the frog waved its hands and feet and bobbed his head. She also noticed another male Sachatamia orejuela glass frog performing the same actions.

“This is a really exhilarating discovery because it’s a perfect example of how an environment’s soundscape can influence the species that live there. We’ve found that Sachatamia orejuela has an extremely high-pitched call, which helps it communicate above the lower-pitched white noise of waterfalls. And then to discover that it also waves its hands and feet to increase its chances of being noticed —  that’s a behavior I’ve always loved reading about in textbooks, so it is beyond thrilling to be able to share another amazing example with the world,” said Brunner.

The pandemic has halted Brunner’s fieldwork but she hopes to return to Ecuador soon and continue her research. 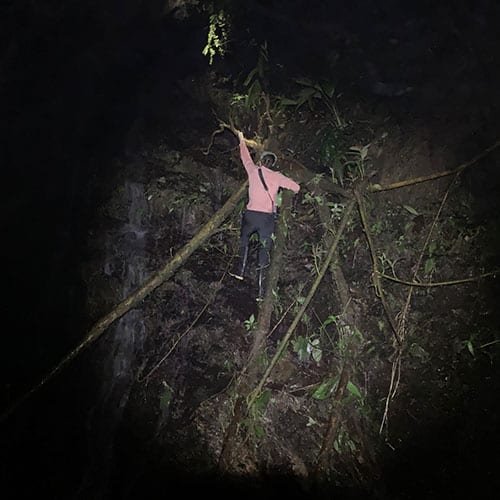 Brunner’s colleague captured a picture of her climbing a slippery rock face to record the glass frog. (Photo by Rebecca Brunner)

“One of the best things about fieldwork is that nature is always full of surprises — you never know what discoveries you may happen upon,” Brunner said. “I hope our findings can serve as a reminder that we share this planet with incredible biodiversity. Conserving ecosystems that support species like Sachatamia orejuela is important not only for our well-being, but also for our sense of wonder.”

To attract mates amidst noise, these frogs wave their arms and legs