Redmi K40 Series with Snapdragon 888 Set to Debut in February 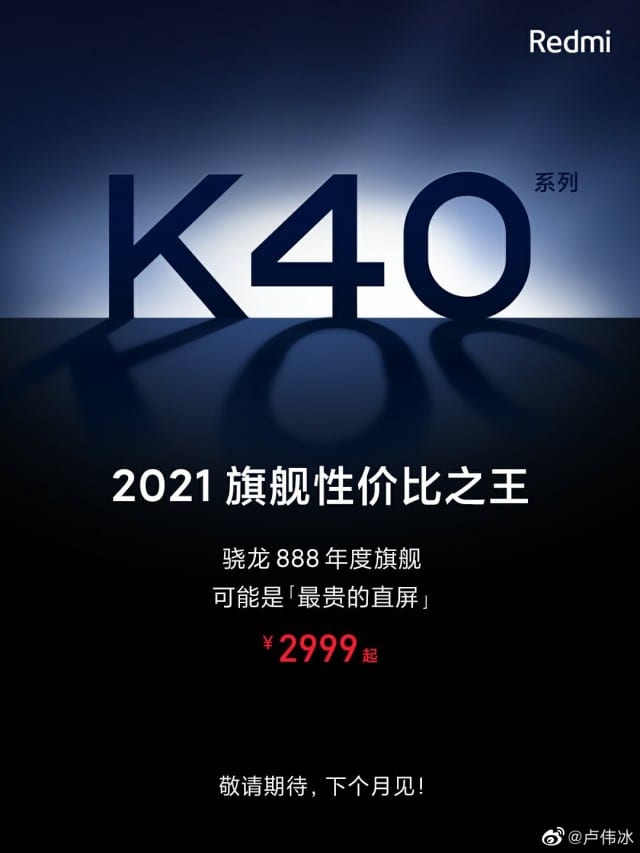 For starters, the poster mentions the “Redmi K40 Series” so Redmi could launch over one Redmi K40’s, most probably a vanilla and a pro model, with other models joining later on.

Well, we already know that the Redmi K30 successor will be powered by Qualcomm’s latest and greatest Snapdragon 888 chipset, and the poster reaffirms it. Further, it will come with one of the most expensive flat displays, starting at just CNY 2,999 (~INR 34,000).

Lu’s recent post on Weibo spilled more beans about the Upcoming Redmi Flagship, first that it’s arriving next month and second that it will come with a battery bigger than 4000mAH.

According to previous rumors, Redmi will ditch the pop-up camera in favor of hole-punch cameras for its flagships this time. Also, the upcoming Redmi flagship series is expected to feature 120Hz display, and there are slight chances that Redmi will go with AMOLED panels this year for the upcoming K40 models.

We will get to know more about the upcoming Redmi flagship series as we near the launch.

Redmi K40 Series with Snapdragon 888 Set to Debut in February