For a short while on Monday evening, Google servers went down in several parts of the world. Several services attached to Google like Gmail, YouTube, G Pay, G Classroom, Meet etc faced similar problems. Users were logged out of ongoing meet sessions. Even though the services were restored under an hour, it turned into one of the biggest social media trends and sent a panic wave across businesses and individual users.

Users were unable to access these services, or login into the same. The error message, “The server cannot process the request because it is malformed” greeted and shocked many people trying to use the search bar. People from several countries like India, UK and Germany reported facing these problems. 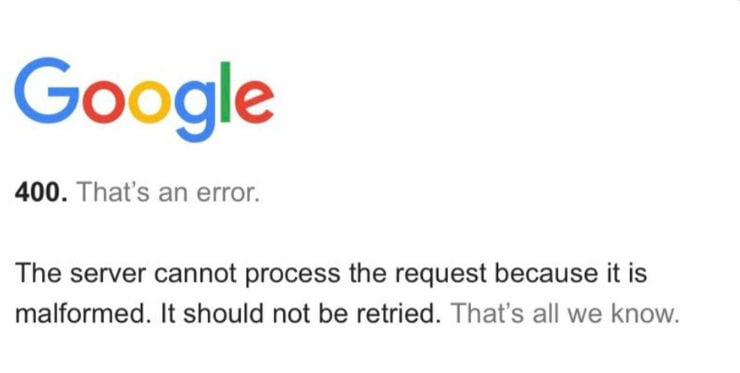 Gmail was the first service reported to be down, while the status page showed red for most services. An update on the Google Workspace status dashboard said, “We’re aware of a problem with Gmail affecting a majority of users. The affected users are unable to access Gmail. We will provide an update by 12/14/20, 5:42 PM detailing when we expect to resolve the problem. Please note that this resolution time is an estimate and may change,” posted at 5:25 PM IST.

In response, the company tweeted:

Today, at 3.47AM PT Google experienced an authentication system Outage for approximately 45 minutes due to an internal storage quota issue. This was resolved at 4:32AM PT, and all services are now restored.

The search engine was still working fine since the problem was with its authentication system, which is used for logging in and similar functions. Users were able to access websites through “incognito mode”, which doesn’t store the user’s browsing activity.

Google doc users could still access their files if they had synced it offline, but couldn’t use any online features. The incident proved how dependent we are on Google for our simple everyday work. Everyone took a sigh of relief as the services were restored.

“System reliability is a top priority at Google, and we are making continuous improvements to make our systems better,” Google later stated. Across the world, a vast majority of people use the company’s paid and free services, and an hour-long outage in the middle of the workday left everyone in a bind. There might be questions on the company’s services on whether the backend infrastructure is strong enough to take the spike in load.

An outage like this was unexpected, and even rare since users from a single geographical location are hosted over multiple servers across the world. Even if something goes wrong in these servers, there are backups which activate immediately. However, the outage on Monday was not localized.

As soon as the problem was discovered, netizens flooded social media with memes and jokes. People not using the company’s services at the time also discovered that the servers were down, due to the explosion of the news on all social media platforms. #GoogleDown was trending on Twitter.

Many blamed the #MondayBlues. One user wrote: “Even Google couldn’t get away with the Monday Blues. Isn’t it Google?” Many users also joked about using google to ‘Google’ why google is down.

I’m sitting here in the dark in my toddler’s room because the light is controlled by @Google Home. Rethinking… a lot right now.

Some also felt glad that they had not resorted to using Google services for their work.

This is the exact reason I've always used MS Word and MS Excel. This is my worst nightmare and looking at fellow journos missing their deadlines on Twitter is giving me an anxiety attack.

Many competitors used this as an opportunity to employ a witty marketing technique. Paytm tweeted:

Why 'Retry Later' when you can send money now & instantly?

One user shared a screenshot of a news story, which said, “Google has been contacted for comment, but one spokesperson said they were unable to access their email.” We were unable to find the original story, but it gave many people a good laugh.

There are no ends to the number of hilarious tweets and memes being posted on the internet about this event. The world clearly enjoyed this bizarre occurance, which we hope is one last bummer that 2020 had in store for us.