Whenever any graphics card manufacturer like Nvidia or AMD unveils a brand new GPU lineup, it’s always the budget cards that most people look forward to. It’s become a trend to release the higher-end 80 and 70-series cards, and then the budget 60 and 50 series cards a few months later. For years budget gamers had to compromise on performance if they chose to stick with cheaper GPUs, but that’s about to change with the GeForce RTX 3060 Ti.

Before we get started, I do want to point out how NVIDIA’s claims about the RTX 3070 being “faster than 2080 Ti” were a little…muddy. That card, as seen across many reviews, was quite close to the Turing flagship, but would lose out to the 2-year-old card due to lower memory bandwidth and VRAM, both of which are important when playing at 4K. 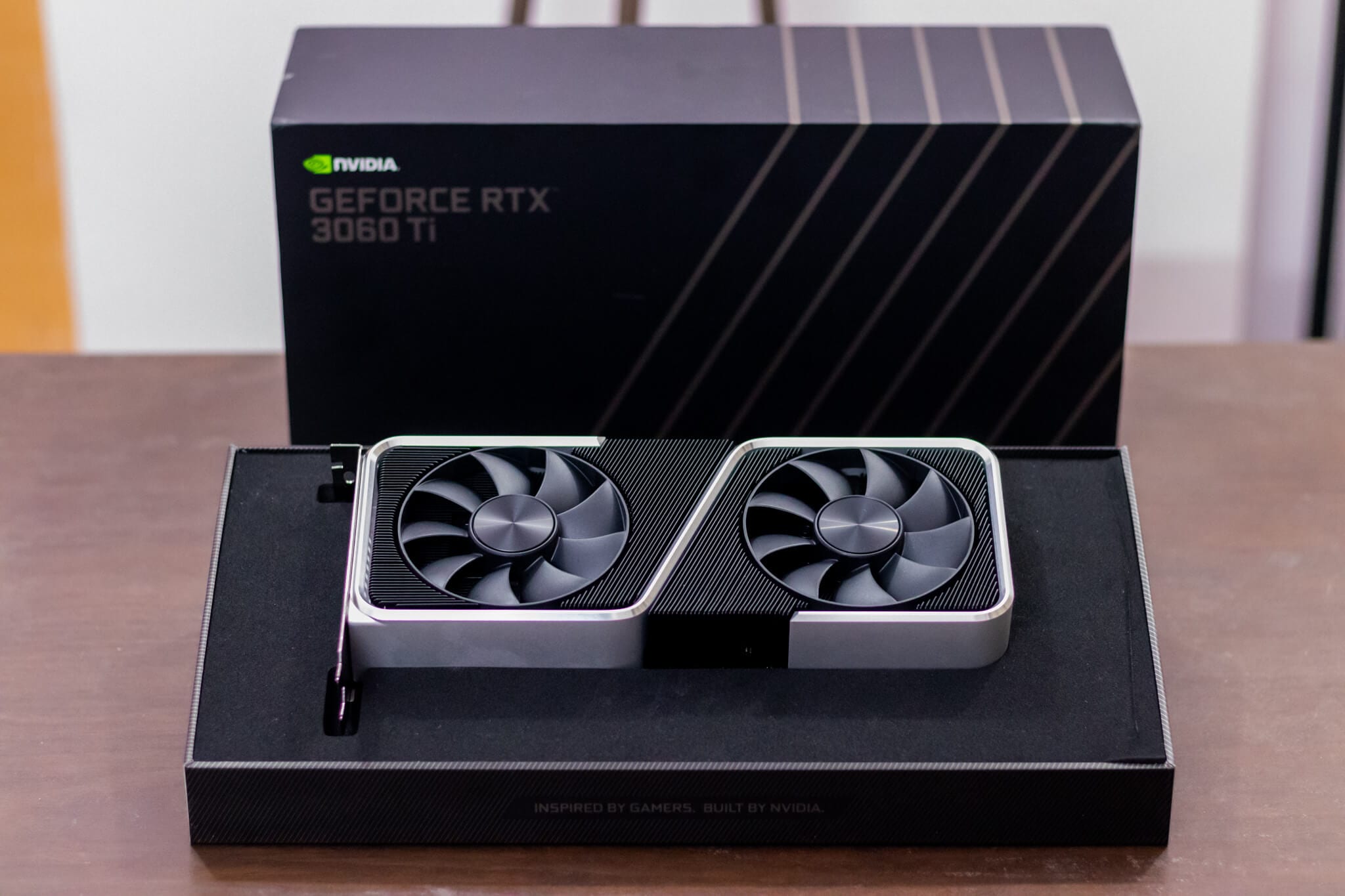 However, coming to the 3060 Ti vs 2080 Super, the latter has the edge in memory clock/bandwidth just by a little margin. You still get the same 8 GB GDDR6 VRAM capacity, with the former (mini) flagship’s power draw being just slightly higher than the new card.

Compared to its predecessor, the RTX 3060 Ti (more than) doubles the amount of CUDA cores, with improved RT and machine learning support (Tensor cores), all the while bringing HDMI 2.1 and AV1 Media decode functionalities. That’s a huge boost over the 2060 Super, which has been in my primary gaming PC for over a year now. 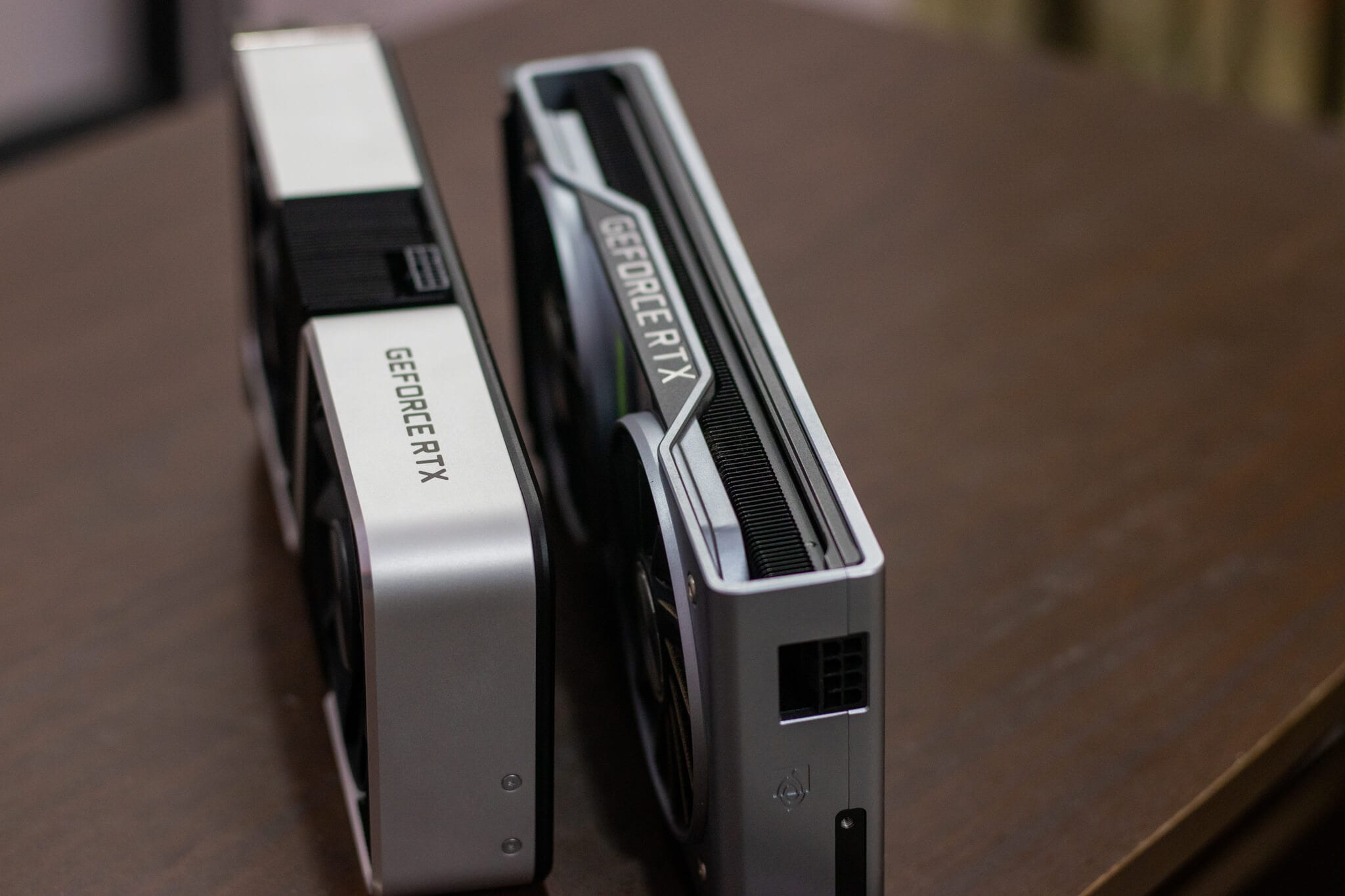 Much like its bigger brothers, the 3060 Ti also includes new features like RTX IO, Reflex Low latency. It also supports NVIDIA Broadcast, which is something I can’t live without now when making video content online. That’s a lot of additions, some of which were present on the 2060 Super, but the newer, more matured ray tracing and DLSS support is bound to be the highlight here.

Alright then, let’s get on to the benchmarks!

Last year’s RTX 2060 Super was already a competent 1440p graphics card while performing similarly to an Xbox One X when it came to 4K gaming. That is to say, you could get just above 30 FPS at 4K on most games, which was quite a leap from the much poorly received RTX 2060 the year prior. This time though, the RTX 3060 Ti is a fully powered 1440p card, and even manages to pull ahead well in 4K gaming benchmarks!

I started testing the card at 1080p, but that wasn’t of much use since with this much power we’d get CPU bottlenecks (similar to our Radeon RX 6800 XT). This is why we switched to primarily 1440p and 4K benchmarks for our testing across both generations of 60 series cards. 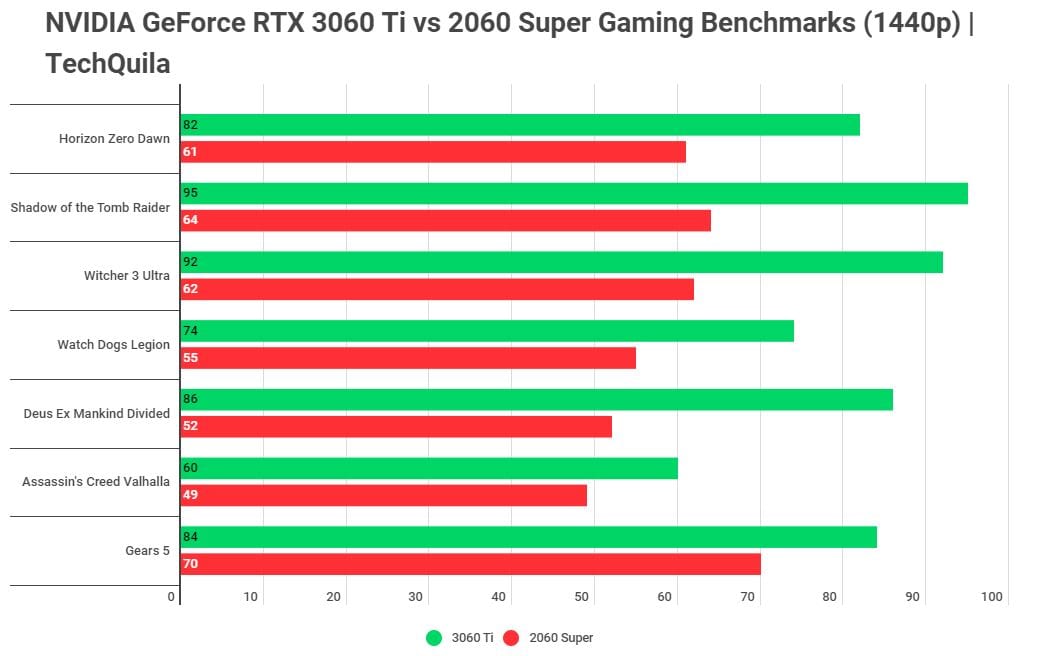 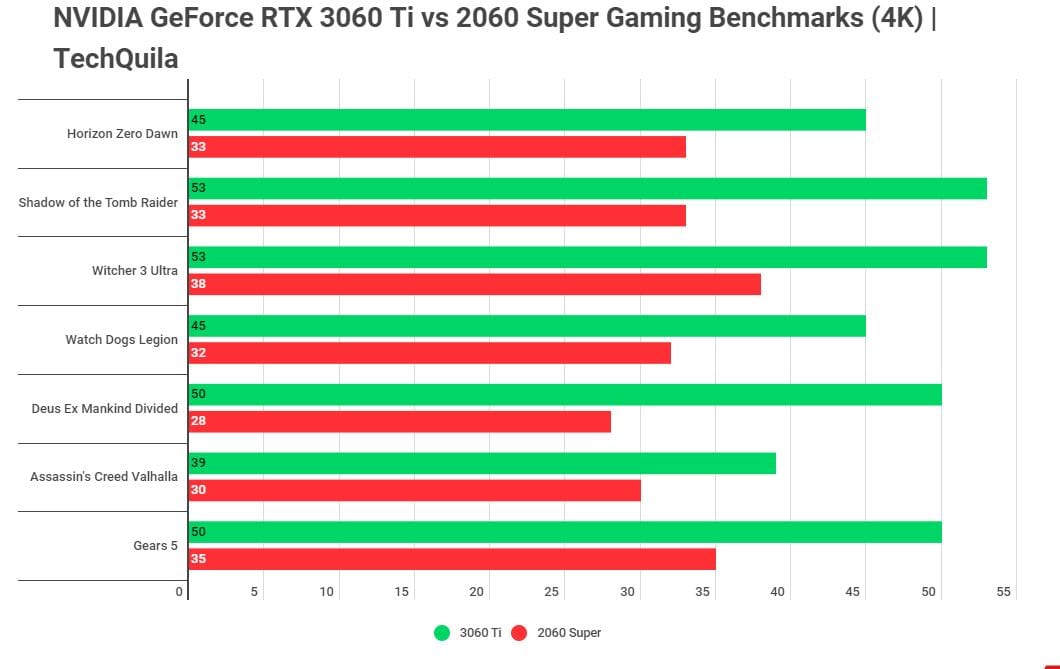 At 4K, the new card pulls ahead by 30% from its younger Turing brother. Slightly less impressive, but that’s still quite good. This doesn’t quite make it a 4K 60 FPS card, but it gets quite close. Remember, we tested all our games at their highest graphical presets, so getting 60 FPS at 4K is quite achievable if you’re fine with turning down certain settings. In that respect, the 3060 Ti reminds me of the GTX 1050 Ti, which wasn’t quite as good at 1080p like the GTX 1060, but would hold its own if you compromised on certain details. I also tested a few other games like Dirt 5 and Call of Duty: Black Ops Cold War. Performance in those games is excellent, with the Call of Duty’s ray tracing implementation really well optimized. I’ll dive deeper into that later in a separate review, but here’s how the card performed at the highest settings:

In gaming, we saw the card clock up to around the higher 1900 MHz range, which is quite typical for an RTX card. That’s higher than its advertised boost clock, but then again we didn’t expect anything different. NVIDIA’s GPU boost algorithm works just fine here, and the improved cooler design helps a lot for sure. Speaking of that, I missed out on testing the RTX 3070 and 3080 when they launched since we didn’t get any review units (It’s alright NVIDIA!). With the 3060 Ti, I was quite amazed at how quiet it is and just how well it functions! Even when overclocked (spoilers), it never went above 81C in even the hardest tests. In afterburner, we had let the power and temperature sliders loose, but NVIDIA’s new (if unorthodox) cooler design was ready for the challenge, hardly breaking a sweat. Bravo NVIDIA! 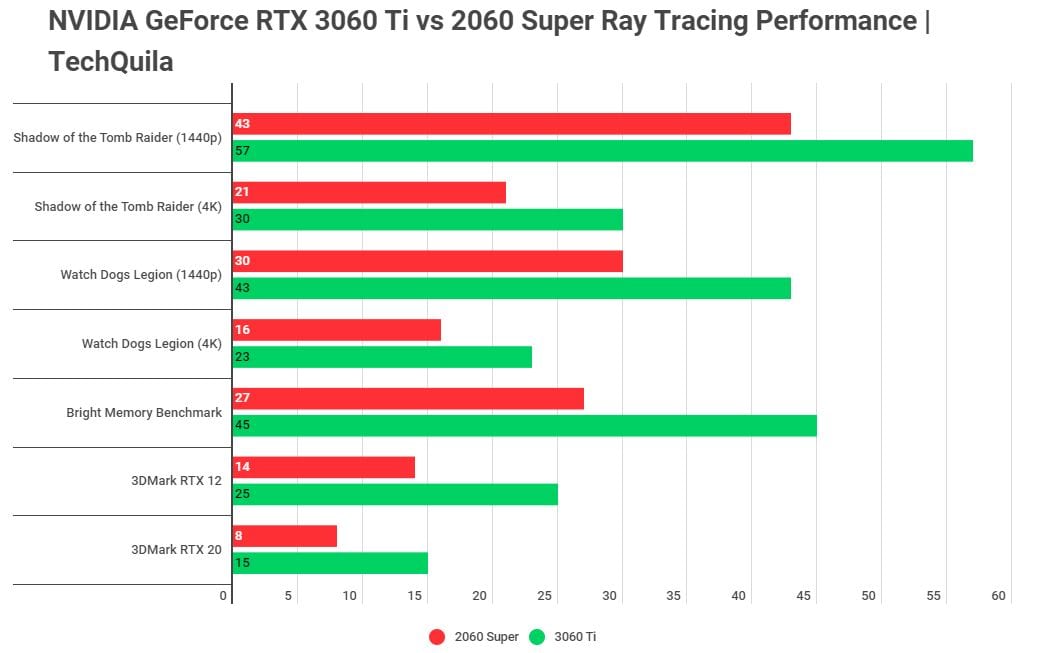 It wouldn’t be a complete comparison if we don’t count ray tracing performance now, would it? After all, that’s what these new cards are built for. On average, the RTX 3060 Ti performs almost 50% better than the RTX 2060 Super with ray tracing enabled. That’s a pretty good performance uplift, and this is without DLSS, which has gotten better over the years.

In synthetic benchmarks, it’s the same story as in gaming. If anything, the 3060 Ti performed better than it did in gaming than the 2060 Super. 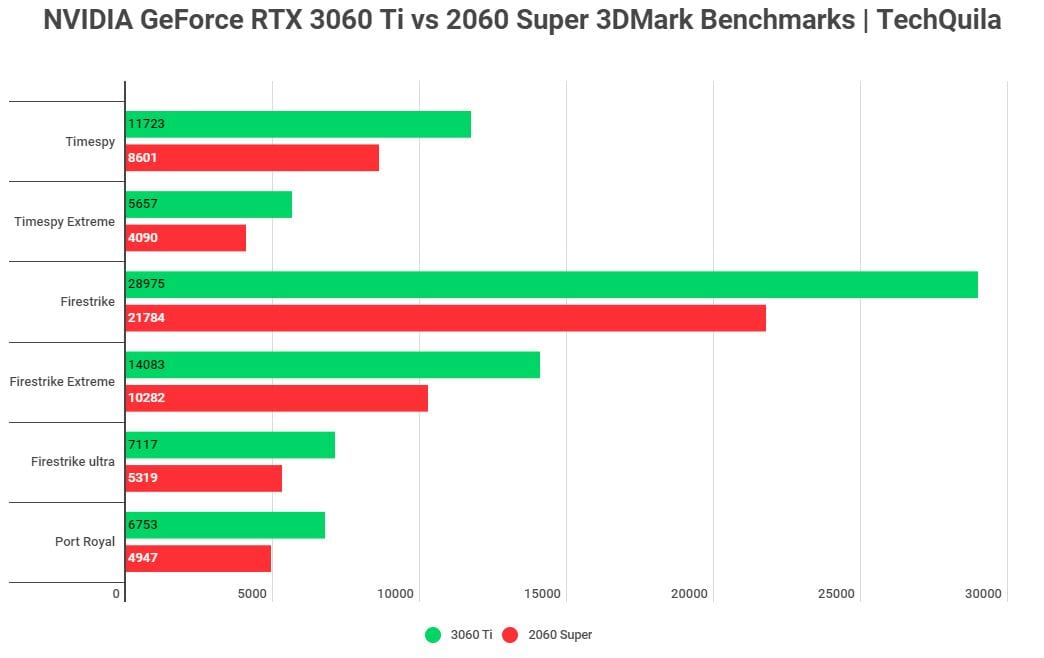 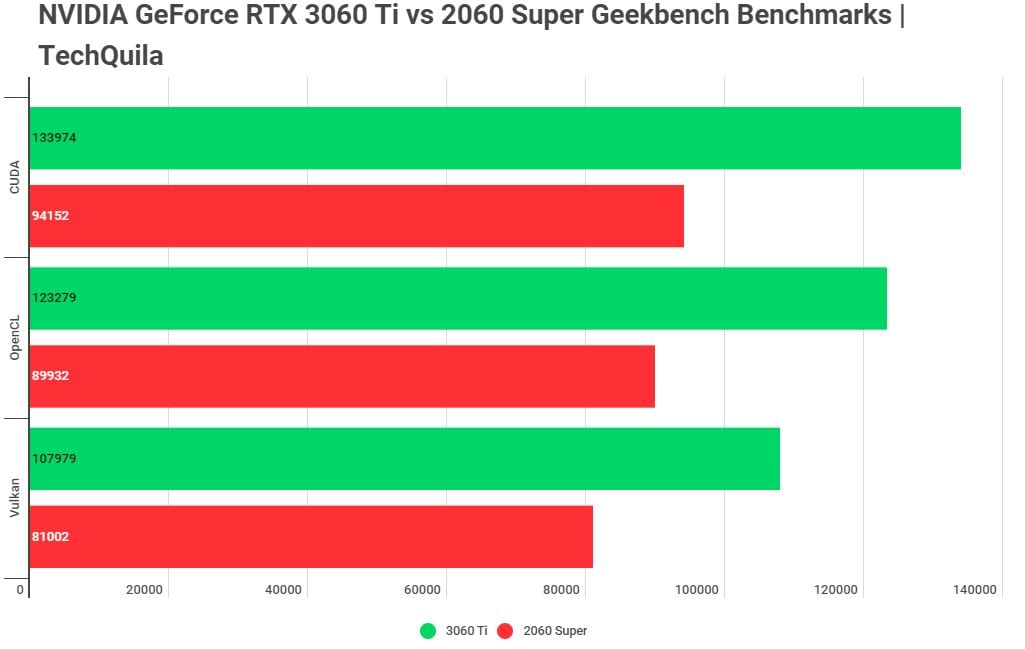 Overclocking – Is It Even Worth It? 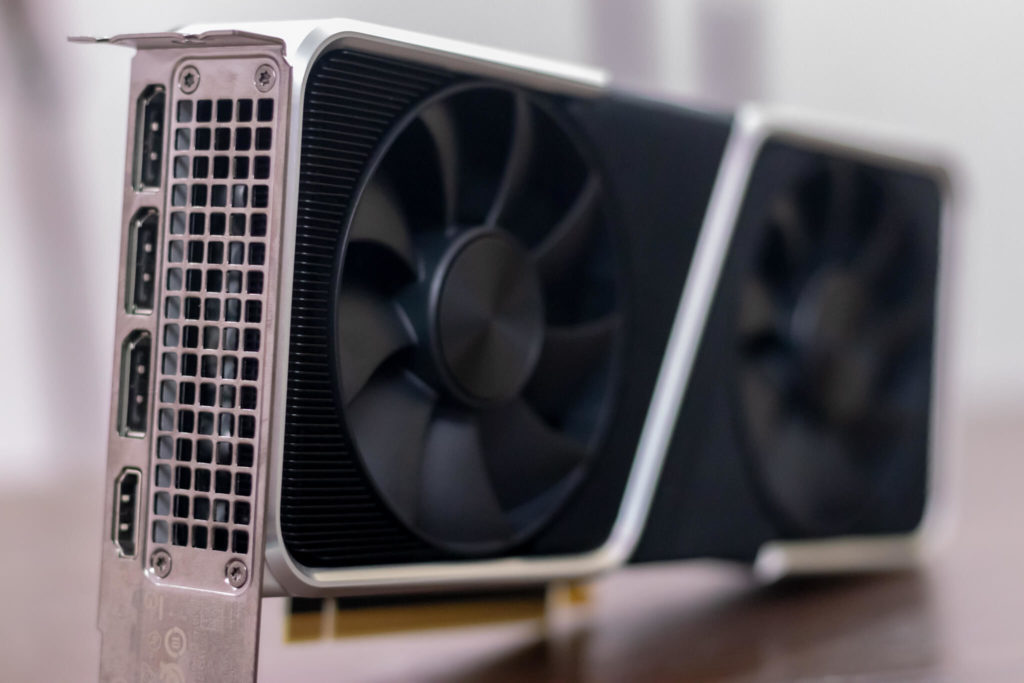 By now it’s well known that NVIDIA cards boost pretty well all on their own, out of the box. It’s kinda similar to how AMD’s Ryzen CPUs function, giving you all the performance right out of the box. But that doesn’t mean that we wouldn’t tinker around with it in Afterburner now, does it? In terms of scalability, it’s a very similar situation to the RTX 20 series, where there’s much higher headroom for memory overclocking, rather than playing around with the core clocks.

I should note that NVIDIA has added built-in overclocking functionality in GeForce Experience’s beta build, and it should make its way to a public release soon. During my time with the 3060 Ti, I tried overclocking with the in-built performance analyzer but found MSI Afterburner to be easier to work with. 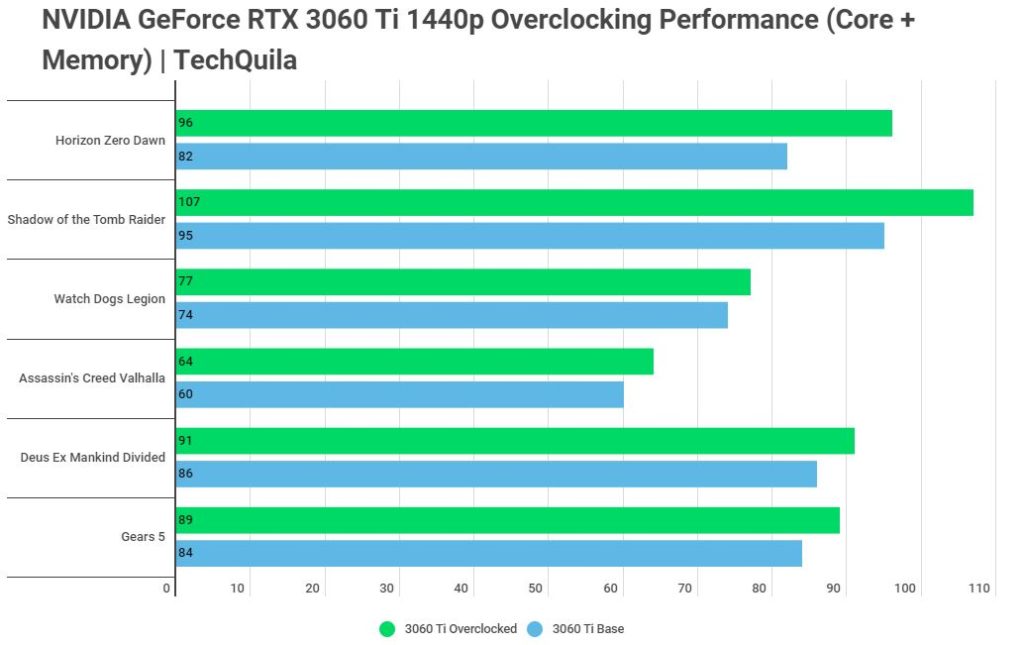 Regarding any performance uplifts that you might expect, all I’ll say is- It’s not much, but it’s honest work. With core and memory overclocked, you gain abound 7% more performance at both 1440p and 4K, without really affecting thermals. 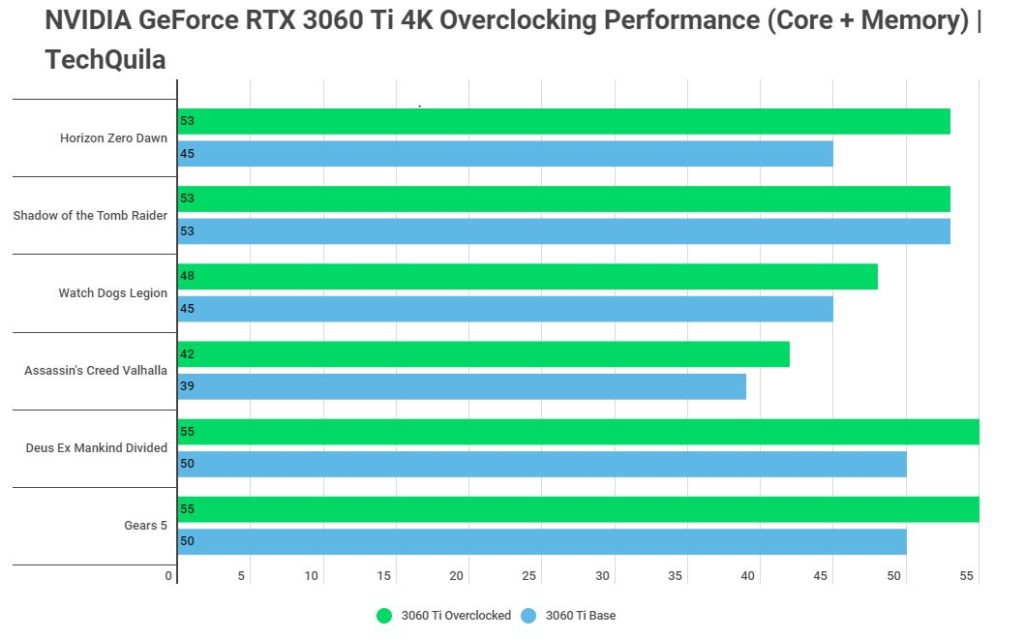 In synthetic benchmarks, the 3060 Ti showed more of its potential when overclocked: 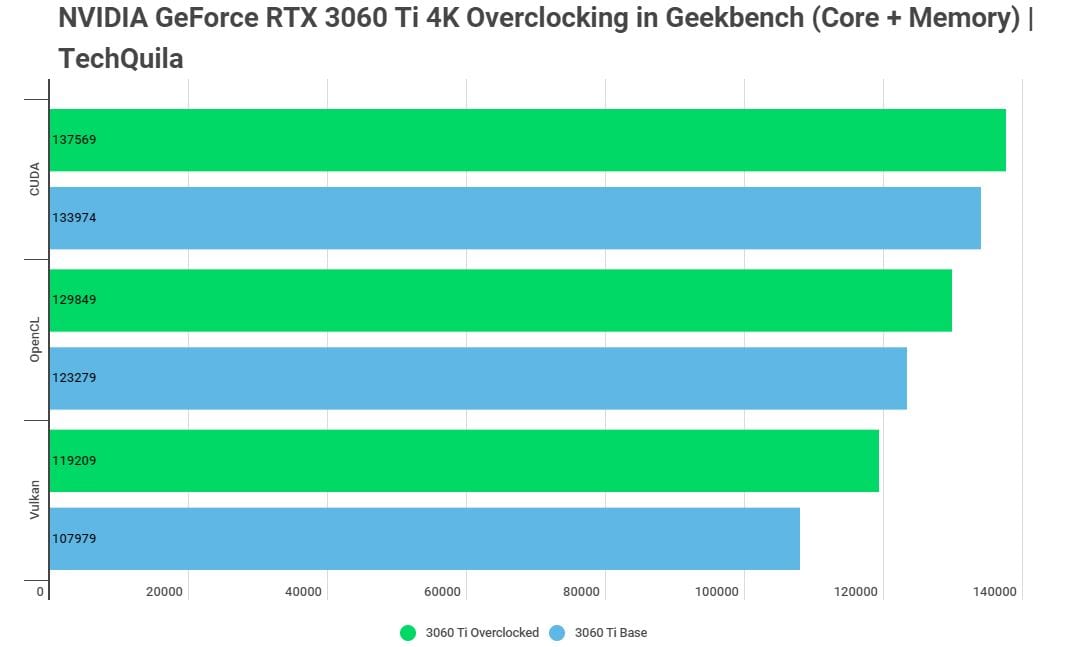 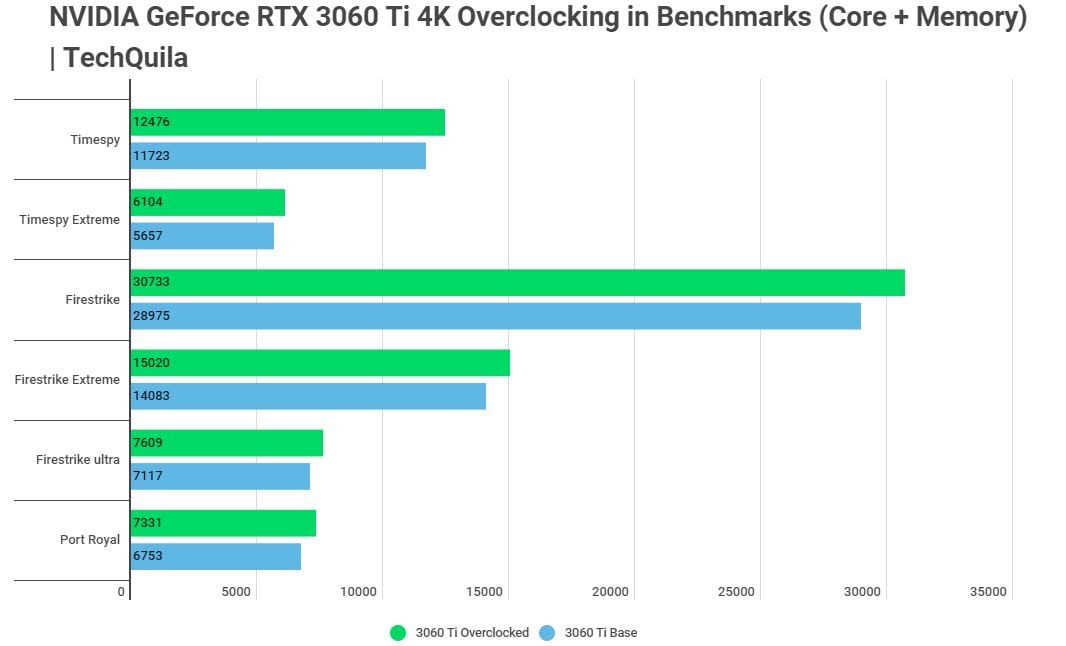 After overclocking, core frequency would fluctuate around depending on the game. I saw it go as high as 2065 MHz but only sustained for a few seconds before coming back down to the low 2000s. That’s still a small boost over the out-of-the-box experience, and given its low TGP, it won’t hurt to overclock for that slight bump in 4K performance. It still doesn’t quite reach the 4K 60 target that I was aiming for, but that’s perfectly fine. Turn down a few in-game settings and you’ll have a decent 4K gaming experience, on a $400 card no less! 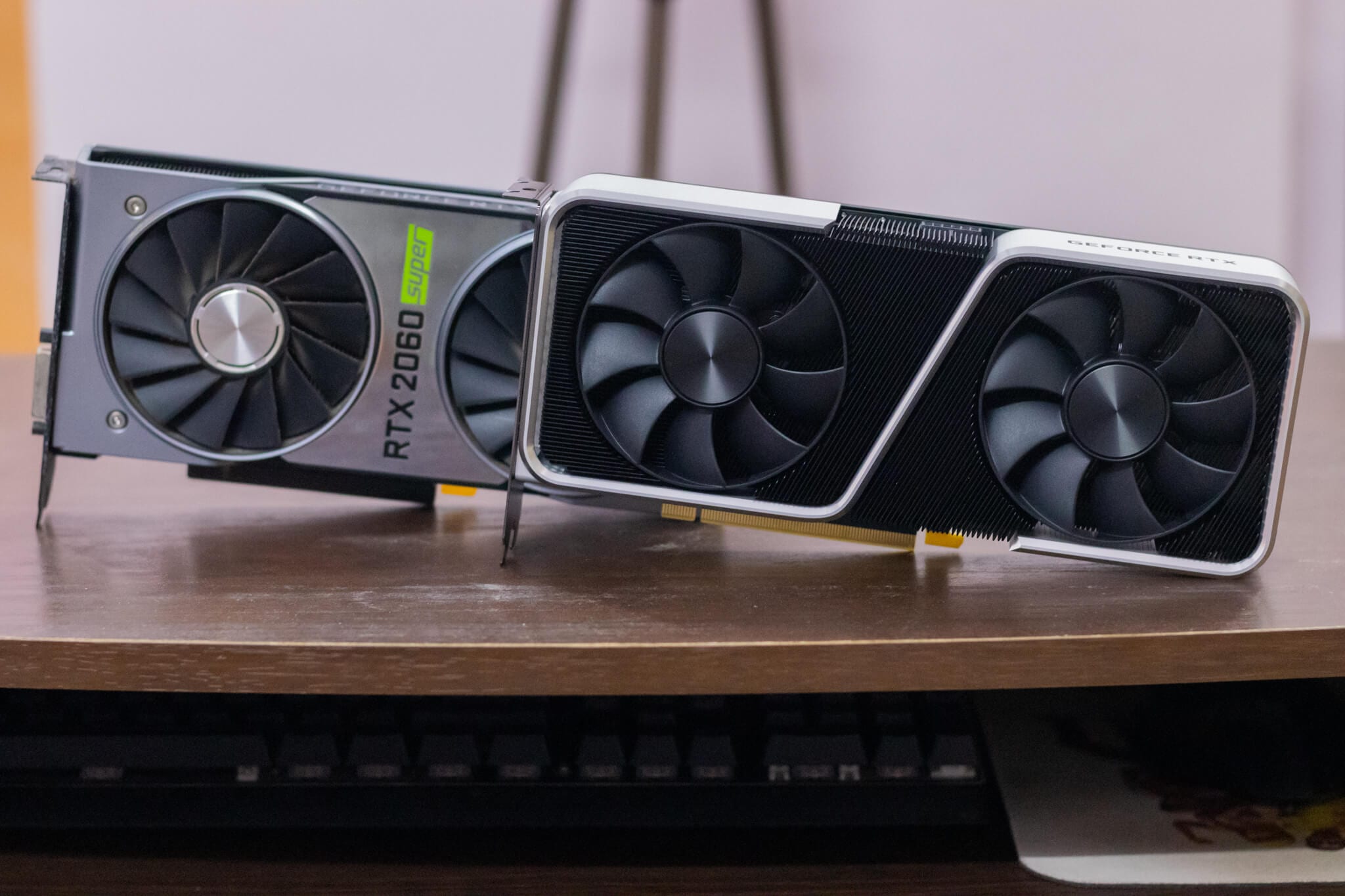 While NVIDIA and AMD have been locked in this battle for gaming performance, team green does have a few extra features which at least in my opinion, significantly boost the value proposition. For starters, we’ve got DLSS 2.0 to boost performance (and image quality in some cases) in ray-traced scenarios, which is something AMD’s RDNA 2 cards don’t have right now.

Then there’s the better hardware support in various content creation suites. NVIDIA’s NVENC encoder is stupidly good, and when coupled with NVIDIA Broadcast, you can get a really good streaming experience with just one machine! I recently streamed Watch Dogs Legion with RTX and DLSS turned on with the older RTX 2060 Super, and got a pretty experience. It’s only bound to get better with the newer Ampere cards, as NVENC and Broadcast keep getting better.

While I don’t use Blender, I do use Adobe’s suite of content creation programs like Photoshop and Premiere Pro. The editing experience there was virtually the same as my RTX 2060 Super, with video encoding times basically remaining the same. That’s not to say that it wouldn’t benefit your specific workload, but with the same memory capacity and bandwidth, you’ll still be handling the same projects that you were with your 2080 Super. 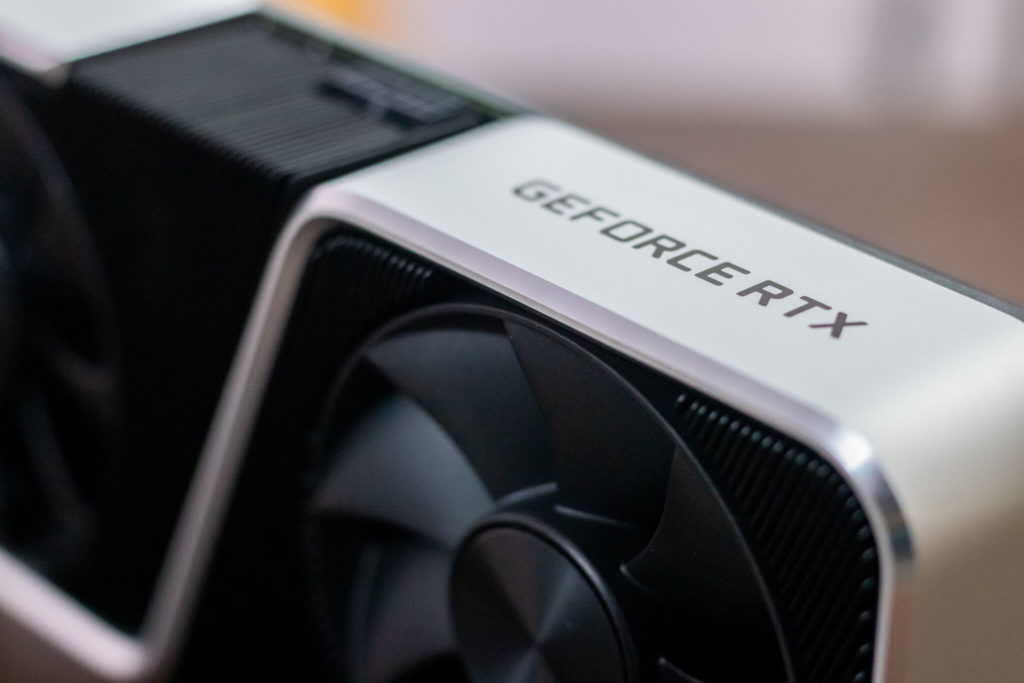 Having used the much more powerful (and more expensive) Radeon RX 6800 XT before this, will I go back to AMD’s flagship card? Maybe. For me, giving up features like NVIDIA Broadcast is extremely hard, and it’s much better NVENC encoder will suit content creators well. Unless AMD introduces FidelityFX Super-Resolution with its upcoming Radeon RX 6700/6600 series soon, the 3060 Ti should still pull ahead thanks to DLSS.

Ultimately, the RTX 3060 Ti provides an excellent value at $399, with improved traditional as well as ray tracing performance. It lives up to NVIDIA’s ‘40% uplift over RTX 2060 Super’ claims well and offers a roughly 30% improvement in 4K gameplay performance. It’s bringing the ‘4K gaming at cheap’ dream close, and with next-gen consoles priced similarly, I did hope that we would meet the fabled 4K 60 FPS target with this card with a little more ease. But then again, if it were that easy with the 3060 Ti, then most people would just get it and not the RTX 3070, which costs $100 more. Oh well, I’ll hold out on that dream when the SUPER cards launch…