Kate Bishop is Coming to Marvel’s Avengers in New Expansion, But It’s Still Not Enough To Save The Game

A new War Table video for Marvel’s Avengers has showcased a new addition to the game – Kate Bishop and her story expansion. But is a new character and new expansion worth jumping back into the game?

When I reviewed Marvel’s Avengers back in September, I was left feeling extremely disappointed. The game suffered from a lot of weaknesses including but not limited to a high number of bugs, improper balancing, weak level design, disappointing enemies and a general feeling of being ‘just average’. The game also didn’t run well on consoles, with the PC version running just well enough to mask some of the game’s inconsistencies. However, throughout all this, it was a heartfelt story of Kamala Khan that kept me going.

Square Enix has already said on multiple occasions that this game is more akin to a platform, with new content dropping afterwards to extend the game’s longevity. We’re getting Kate Bishop soon, followed by Hawkeye, and that will be followed by Spider-Man joining the Avengers next year (at least on the PlayStation version).

In the Kate Bishop gameplay trailer, we see the titular character joining the Avengers with the goal of rescuing Clint Barton (Hawkeye) from AIM. We see new abilities and skillsets being used by Bishop which does look cool but presents the same gameplay problems I had with it when reviewing it. Enemies are still largely the same – either mindless robots or random AIM employees with armour.

Enemies still look and feel just as lifeless as they did when the game launched, and Kate’s move set can be practically guessed outright considering how the game’s control scheme is the same for every character. Instead of firing repulsor blasts or lighting from a hammer, you’ll now be shooting arrows mixed with quantum energy. Yay! 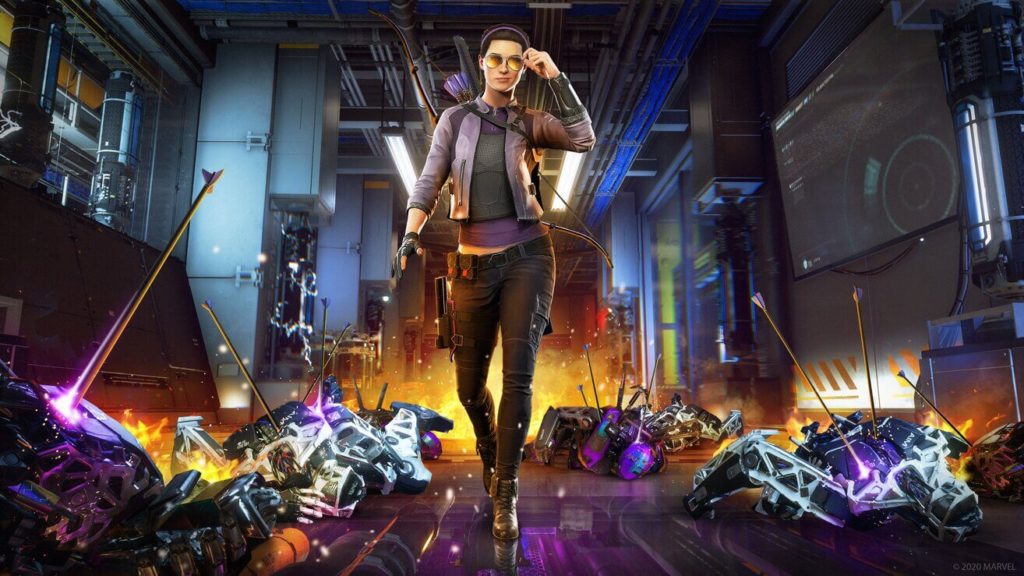 Kate Bishop is a really fun and unique character to add in the game, and I’m sure many fans of the original Marvel comics will be delighted to see her being represented on a blockbuster video game. I felt the same way for Kamala Khan (Ms. Marvel) in the base game, and now that character is getting her own Disney+ show introducing her into the Marvel Cinematic Universe proper. However, it’s also clear that the game itself is still the same as it was the last time I played it, albeit more polished.

Recently we saw how big of a failure Marvel’s Avengers was after its launch, losing Square Enix boatloads of money and player counts on Steam.

Square Enix – reported Yen6.5bn loss for HD Games driven by Marvel Avengers, would not say how many sold but that volumes were 60% of plan. Implies game cost over $100m to make but only sold 3m or so. Ouch

What Square Enix needs to do now is not only provide regular seasonal content but also change the overall structure of the game itself. The list of changes would include mission and level redesigns, adding more varied enemy types, and making changes to the overall balance of the game so it feels less like a grind fest. I haven’t even mentioned the micro-transactions in this full-priced game, which is extremely shameful and must be balanced out as well.

I’m not particularly looking forward to playing the expansions, but I’ll give them a try. When looking at any live service game in recent years, it’s clear achieving a Destiny 2-like status is harder to achieve than what seems. I hope Square Enix & Crystal Dynamics are really listening to fans of the game, as anything related to the Avengers IP, much less a AAA videogame, deserves better.

Kate Bishop is Coming to Marvel’s Avengers in New Expansion, But It’s Still Not Enough To Save The Game