Cyberpunk 2077 is one of the hottest titles of 2020. CD Projekt Red has been hyping up the game with teasers since 2013, when people got to know about the game. The success of The Witcher 3 as the leading title in the open world genre has made more people interested in Cyberpunk 2077 – making CD Projekt Red a name that they need to live up to. With the delays coming in, people are more eager to explore the game’s mechanics rather than listen to a boring YouTube podcast about something they want on their hands. In fact, some of them have gone to the extent of trying to dig out information from game clients about the game – which has yielded quite a few results.

What am I talking about? Well, data mining of the GOG galaxy client has revealed a full set of Achievements for Cyberpunk 2077. Some of these include:-

In fact, the achievement list is much more comprehensive and includes a total of 42 achievements. Approximately 12 achievements are hidden and might require some experimentation from the player to be successfully completed. 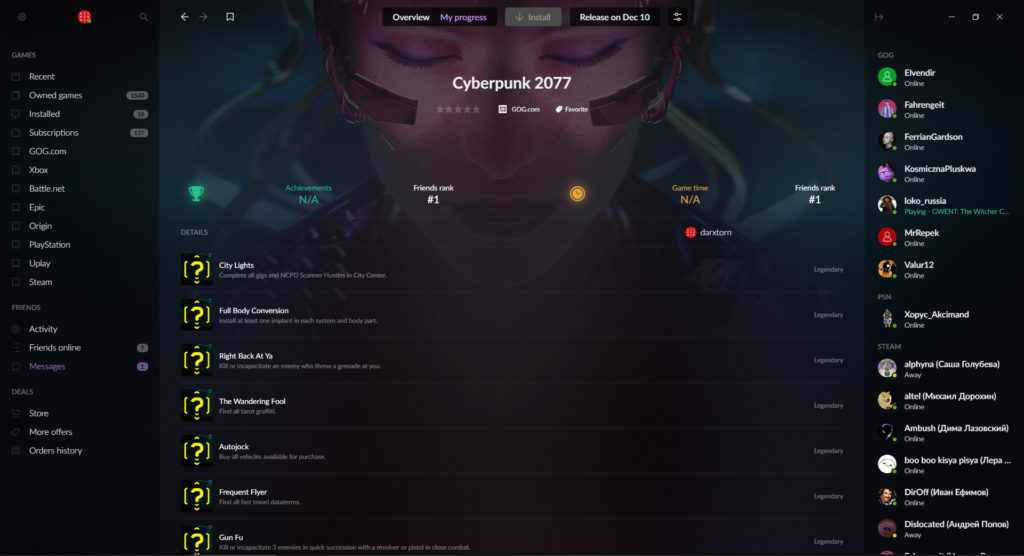 Fortunately, hidden achievements remained hidden so there shouldn't be any heavy story spoilers out there. Still, there are some that we'd been hoping would remain private until the release.

Cyberpunk 2077 has experienced its third delay of the year, being rescheduled to December 10 for the release as the staff gear up for more humane work hours and optimization of the current-gen ports for the game. Further leaks would only aggravate the crowd who want to take the launch day off for playing the game first-hand.